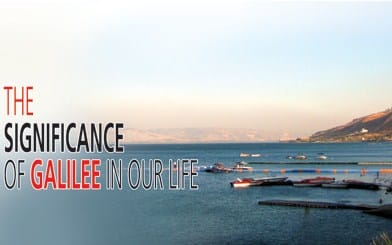 Galilee is a must for God experience in our lives.

While reading the Gospel according to St Matthew, chapter 1&2, one often wonders as to why Jesus had to be born at one place and then shift to another place and from there to yet another place and finally end up in Galilee. It is generally understood to be as to bring true what the prophets had foretold. He starts His ministry from Galilee, immediately after being filled with the power of the Spirit following His temptation by Satan in the wilderness (Luke 4:14-15, Mark 1:14, Mat. 4:12).

Galilee if we see, in those days was a port city full of sailors and merchants. It had all the evils attached with a city with a port in it, which we often see even nowadays in such places. Lot of brothels, immoral women and sinful people used to reside there with humanity taking the least value place and commercialisation at its peak. Without a Saviour, these people were to be doomed. And here is where, Jesus had to start His ministry.

Further to this, one should also contemplate on the hardships faced by Mother Mary and St Joseph to bring Jesus to Nazareth in Galilee. These hardships were in the face of death! The Gospel according to St Matthew chapter 2 verses 13 to 23 and Luke 2:1-39, vividly explain this. For instance, how hard it would have been to carry a baby one day old and his mother to a distant place without any permanent establishment to live in! Then again after few days they had to shift back to Israel only to retreat to the town called Nazareth in the district of Galilee. One must not forget as to how painful the social life would have been to a righteous man like Joseph in a sinful city like Galilee.

These hardships in his life were required to fit into the Godâ€™s larger plan of saving the mankind which included even a sinful city like Galilee! Then only Jesus could have started His public life there and minister His healing and preaching to the people there.Â Though at each place, where they shifted, St Joseph had to build up his living means through hard toil. However, instead of complaining over his plight, he followed the inspirations given during various instances by God, in absolute slave-like obedience from his heart. That is why he is remembered and mentioned in the Holy Bible through a singular expression-â€œJoseph was a â€˜RIGHTEOUSâ€™ manâ€ (Matt 1:19).

St Joseph was playing his role wonderfully well through these hardships so as to fulfil Godâ€™s plan. Not even a single instance did he rebel against God as done by the Israelites in the book of Exodus, instead religiously followed the divine inspirations however troublesome it were and reached Galilee. Hence, St Joseph like Abraham, was an epitome of real, absolute faith which made him strong to play his part in the grand plan of God for worldâ€™s salvation. His strength was faith, faith and faith alone as said about the characters of Old Testament in Hebrews 11.

Unlike in times of the Old Testament where in cities of Sodom & Gomorrah were destroyed to cinders due to the wrath of God owing to their sinful life (Gen19:14,24-25), God wanted the New Covenant period to start with His saving act up on the most sinful city. â€œJesus went throughout Galilee, teaching in their synagogues and proclaiming the good news of the Kingdom and curing every disease and every sickness among the peopleâ€. God wanted to manifest His mercy and make it known to the people through Jesus that His nature was the embodiment of mercy and that His Mercy is as great as His Majesty.

A Lesson for Victorious Life

God can do the same miracles today also, in our daily lives because, â€œJesus Christ is the same yesterday and today and foreverâ€ Hebrews 13:8.Hence, when troubles exceed in your life, lift them up along with your tears to our Lord at the foot of His Cross with faith and expectation. This would lead your prayers and supplications to channelize Lord Jesusâ€™ mighty power to manifest in the biggest of your troubles.

Do not be disheartened but wait patiently for the Lord and pray incessantly to lead you in your life according to His plan. Remember the golden adage that the night is darkest just before dawn; similarly, The Lordâ€™s saving power is greatest at the time when tribulations are great. All glory to Him whose power is greatest among the weakest of us!

â€œAbba Father! I surrender these paths to the cities of Galilee in my life which makes me hard & troublesome to live – the situation of (mention the state here). I invite you Jesus to come and reside with me in this state so that this would transform to a state of bliss. Lord! Help me to obediently follow your inspirations as St Joseph did, even if they may seem difficult for me. Lord, give me the grace to channelize your power in my life through my obedience and to see your triumph over my troubles. In Jesusâ€™ name I pray, Amen!â€ 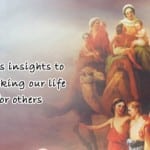 How To Make Our Life A Blessing For Others 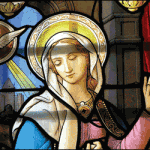 Maryâ€™s Faith : A Model For The Church 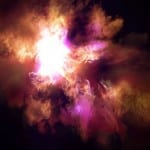 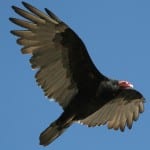 Why God made Vultures

2 thoughts on “The Significance of Galilee in Our Life”