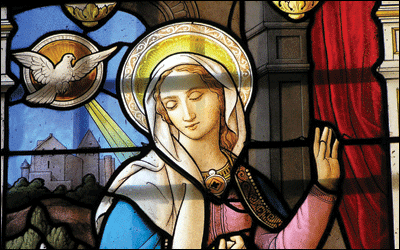 God can work miracles only as strong and as big as our faith is!

Faith is a personal adherence of human being to God. â€œFaith is the assurance of things hoped for, the conviction of things not seenâ€ (Heb. 11:1). By faith, one completely submits oneâ€™s intellect and will to God. With oneâ€™s whole being, one gives oneâ€™s assent to God. Sacred Scripture calls this human response to God â€œthe obedience of faith.â€ (Cf. Rom.1:5; 16:26). The Virgin Mary most perfectly embodies the obedience of faith.

At the event of the Visitation, Elizabeth praised Mary for Her faith: â€œBlessed are you who believed that what was spoken to you by the Lord would be fulfilledâ€ (Lk. 1:45). Mary lived, acted, and moved always in the ambit of faith. From the Annunciation to the Cross, Mary always assented with the same obedience of faith to all revelation, to all the designs of God. Every moment of her life was an invitation to act on her faith. God can work miracles only as strong and as big as our faith is and as a fruit of her obedience, she in turn, deepened her faith. That is why we can truly say that Mary had a pilgrimage of faith from the Annunciation to Her Assumption, and that this pilgrimage climaxed on Calvary.

At the moment of the Annunciation, Mary was presented with two different and amazing revelations: first, that she was full of grace, and second, that she was being chosen to receive the greatest invitation a creature had ever received â€“ to become the virgin mother of the Messiah, the Son of God. This conception was to be accomplished by the overshadowing of the Holy Spirit, a miracle! It is something impossible for men, but not for God. It was precisely this human impossibility and this divine possibility that called Mary to open totally to the gift of faith â€“ and she believed in her God, a God that could do that kind of miracle, a God that chose His lowliest servant for such a dignified and exalted vocation and mission.

St. Augustine said that â€œMary first conceived in her heart by faith and then in her womb.â€ Maryâ€™s response, â€œmay it be done to me according to your wordâ€ (Lk. 1:38), is a sign of her full assent to the will of God, to the revelation received, to her role in this redemptive mission. Only a heart full of faith like Maryâ€™s can give that kind of assent to such a vocation and to all the unexpected events that would form that reality â€“ a series of events that were far beyond human intelligence or human calculations.

Many times the external appearances of situations could have seemed enough to prove false her faith. It was precisely at these moments when Mary â€œkept all things in her heartâ€ (Lk. 2:51), allowing the Holy Spirit to enlighten, to strengthen and to deepen her faith. This reverent act of Mary of keeping all things in her heart, especially those she did not fully understand, was an honest search for the hidden sense of the events that she knew by faith must exist, since the Lord could have never abandoned or misled her.

The Dogmatic Constitution on the Church, â€˜Lumen Gentium,â€™ presents Mary on a journey, on an itinerary of faith that was manifested in all the different stages she lived during her earthly life. In this document we read: â€œEmbracing Godâ€™s salvific will with a full heart and impeded by no sin, she devoted herself totally as a handmaid of the Lord to the person and work of her Son, under Him and with Him, by the grace of almighty God, serving the mystery of Redemption â€¦ freely cooperating in the work of human salvation through faith and obedienceâ€ (No.56).

Maryâ€™s faith did not only sustain her life, but it gave abundant fruit for our redemption since, as â€˜Lumen Gentiumâ€™ describes, by her faith, Mary freely and fully cooperated in the work of human salvation. For, as St. Irenaeus says, she, being obedient, became the cause of salvation for herself and for the whole human race. The knot of Eveâ€™s disobedience was untied by Maryâ€™s obedience; what the virgin Eve bound through her unbelief, the Virgin Mary loosened by her faith. (No. 56).

Mary at the Foot of the Cross

St. John, in this passage, wants to exalt Maryâ€™s faith by presenting two elements in reference to this event: First, Maryâ€™s presence at the foot of the Cross. It is precisely at this place where the faith of the disciples and, logically, Maryâ€™s faith, is put to the hardest test. Her presence manifests her fidelity, her constant abandonment to the designs of the Lordâ€™s will, and a faith that is undiminished, unchanged and unaltered even in the darkest hours.

Second, in the words of Jesus, â€œBehold your son,â€ Mary is invited to expand the horizon of her faith and the understanding of her role, since her motherhood is now moving beyond her dying son; it has been extended to the reality of a spiritual maternity for all the children of God. This last will of Jesus on the Cross became, for Mary, a new annunciation of a conception and birth: The Church.

One of the titles attributed to the Virgin Mary is that of Faithful Virgin. Maryâ€™s faithfulness has different dimensions. The first dimension is called search. Mary was faithful first of all when she began, lovingly, to seek the deep sense of Godâ€™s plan in her and for the world. She asked the Angel of the Annunciation: â€œHow shall this be?â€ There will not be faithfulness if it is not rooted in this ardent, patient, and generous search; if there is not in manâ€™s heart a question to which only God gives an answer, or rather, to which only God is the answer.

The second dimension of faithfulness is called reception, acceptance. The â€˜How shall this be?â€™ is changed, on Maryâ€™s lips, to a â€˜fiatâ€™. Let it be done; I am ready; I accept. This is the crucial moment of faithfulness, the moment in which man perceives that he will never completely understand the â€œhowâ€; that there are in Godâ€™s plan more areas of mystery than of clarity; that, however he may try, he will never succeed in understanding it completely. It is then that one accepts the mystery, gives it a place in oneâ€™s heart with the availability of one who opens up to be inhabited by somethingâ€”by Someone!â€”greater than his own heart.

The third dimension of faithfulness is constancy. It is easy to be consistent for a day or two. It is difficult and important to be consistent for oneâ€™s whole life. It is easy to be consistent in the hour of enthusiasm; it is difficult to be so in the hour of tribulation. And only a consistency that lasts throughout the whole of life can be called faithfulness. Maryâ€™s faith was constant, not only present in the times of â€œapparent gloryâ€ when Her Son was performing miracles and had many disciples that believed in Him; it was just as strong when there was no â€œapparent glory,â€ when there were no supernatural manifestations or happenings to attract attention, and even when there were not that many disciples to believe â€“ except one, the one that was with her at the foot of the Cross.

The same faith that Mary had at the birth of her Son was the one she had at the Cross. It required much faith to have in her arms that defenseless baby, and to put him in the manger and believe that He was the God-man. It also required much faith to see her Son totally disfigured and defenseless on the Cross, waiting for him to be placed in her arms, to then be put in the sepulcher. Her faith allowed her to continue to believe that, regardless of what appeared to be, He was the God-man.

Maryâ€™s faith was aÂ perfect one. Throughout her life and until her last ordeal when Jesus, her son, died on the cross, Maryâ€™s faith never wavered. She never ceased to believe in the fulfillment of Godâ€™s word. And so the Church venerates in Mary the purest realization of faith. In Cana Jesus proclaimed that it was not his â€œhour,â€ and Maryâ€™s faith and intercession, manifested in the form of a petition, achieved the first miracle, the miracle of the wine.Â At the Cross, when it was in factÂ Jesusâ€™ Hour, Maryâ€™s faith and intercession, now manifested in silence, also witnessed the outpouring of the new wine, the blood of Her Son being shed for our salvation, to quench our thirst for God and His divine life.

In these times, marked by a spirit of unbelief, secularization and materialism, we need to ask the Holy Spirit to give us the same faith of Maryâ€™s Heart, so as to be able to stand with her at the foot of the Cross infidelity to her Son and His teachings. 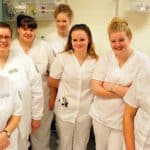 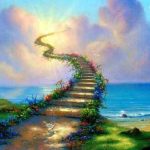 Poem : Death Is Nothing At All 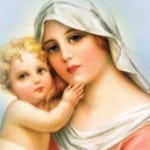 If Jesus is God, Mary is Mother of God

2 thoughts on “Maryâ€™s Faith : A Model For The Church”