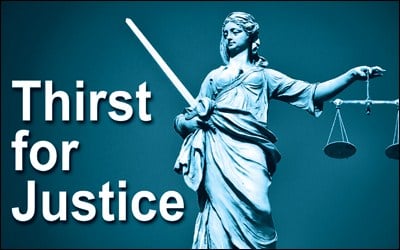 In our daily life we quite often forget to lead a life of justice. Our own evil tendencies and bad examples from others prompt us to give up growing in righteous life.

In the book of Genesis we read about the covenant which God made with Noah. When the Lord saw that the wickedness of humankind was great, He decided to cleanse the world by blotting them out from the earth. But the Lord God made a covenant with Noah before purifying the world of evil. He told Noah to build an ark and to take into it seven pairs of all clean animals and a pair each of all unclean animals. For carrying out the purification of the world God chose Noah from among all the men. â€œThe Lord said to Noah â€˜go into the ark, you and your household, for I have seen that you alone are righteous before me in this generation of the world. The Bible points out that Noah was found pleasing to God and was saved from destruction because he was righteous and blameless. â€œNoah was a righteous man blameless in his generation. Noah walked with Godâ€ (Gen.6:9).

It is obvious that for the fulfillment of His plans God calls such people who walk in the way of truth and justice. In the New Testament also we find a just man chosen by God for carting out His redemptive work. He was Joseph the just man. Joseph was chosen by God to share in His redemptive work. God had decided to save the world by sending His Son through the Blessed Virgin Mary. Her husband Joseph did not reject her on realizing that she was with child by the power of the Holy Spirit. The Bible tells us the reason: for he was a just man and did not wish her to be put to shame. â€œHer husband Joseph living as a righteous man and unwilling to expose her to public disgrace, planned to dismiss her quietlyâ€ (Mt.1:19). However he changed his decision at the advice of Godâ€™s angel. Being advised by the angel Joseph accepted Mary as his wife. â€œWhen Joseph awoke from sleep he did as the angel of the Lord commanded him; he took her as his wifeâ€ (Mt.1:24).

We realize that for the fulfillment of two important plans of God, He chose two righteous men. â€œGod loves righteousnessâ€ (Ps.37:28). Righteous people are those who walk in Godâ€™s ways. That is why He loves righteous men and selects them as instruments of His plans. The radiance of justice and righteousness is remarkably displayed in their lives. A life that is just is very valuable in the eyes of God.

That is why when God was planning to destroy Sodom Gomorrah, Abraham asked God whether He would destroy the just men together with the wicked. Then God announced â€œIf I find at Sodom, fifty righteous in the city, I will forgive the whole place for their sakeâ€ (Gen.18:26). Even when Abraham reduced the number fifty, the Lord answered that He would spare the city for sake of the few just men.

And let us remember that we are called to lead a life of justice. â€œLove righteousness you rulers of the earthâ€ (Wis.1:1). In Psalm 15 the psalmist asks: â€œO Lord, who may abide in your tent? Who may dwell on your holy hill?â€ The psalmist himself gives the reply: â€œThose who walk blamelessly and do what is right and speak the truth from their heartâ€ (Ps.15:1-2).

The life of a just man is like fertile field where holiness thrives. They live in accordance with Godâ€™s commands that are in obedience to the Word of God. Hence their lives are sinless. â€œThe law of their God is in their hearts; their steps do not slipâ€ (Ps.37:31). Very often when we face problems, illness or frailness in our lives, we should carefully examine whether there have been some unfortunate things which have caused our steps to slip.

In our daily life we quite often forget to lead a life of justice. Our own evil tendencies and bad examples from others prompt us to give up growing in righteous life. Selfish interests are growing daily in our society. On occasions when we have to do justice to others we often fail to do justice. An unjust life will end in disaster. â€œThough the wicked sprout like grass and all evil doers flourish, they are doomed to destruction for everâ€ (Ps.92:7).

The bible speaks about many unjust people. Among them the most prominent one is Judas Iscariot who betrayed Jesus. We who are called to lead a life of righteousness should try to show respect and kindness to our fellow-men. â€œEach one of us should consider our neighbor as another self. Above all we must have care regarding our life and regarding the means by which to lead a respectable lifeâ€™ (CCC).

However no true Christian can lead a life which is unjust and unfair because every Christian is called to live a righteous and upright life. We should love each other on the command of our Lord. The reward of a righteous life is becoming Godâ€™s own people. â€œThey are planted in the house of the Lord; they flourish in the courts of our Godâ€ (Ps.92:13). All of us are called to flourish in the house of the Lord. Just as Noah and Joseph were called as instruments in Godâ€™s plan, so we too should endeavour to lead righteous lives to be planted in the house of God. Noah and Joseph understood that life in this world was only for a while and that they had much to fulfill in this life according to divine plans.

2 thoughts on “Thirst For Justice”