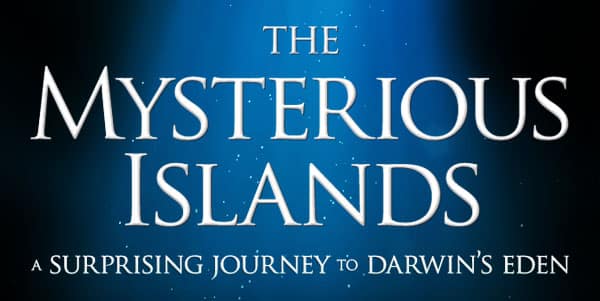 A Testimony to God’s Hand in Creation – A recently released documentary challenges Charles Darwin on â€œGround Zeroâ€ of evolution: the Galapagos Islands. Led by Vision Forum founder Doug Phillips, the expedition covers the territory and animals Darwin visited and studied nearly 200 years ago, but comes to a very different conclusion.

Majestically filmed by award-winning Jon and Andy Erwin of Erwin Brothers Motion Pictures, the 90-minute documentary is told through the eyes of 16-year old Joshua Phillips, exploring with his father the world Charles Darwin wrote about.

The Mysterious Islands feature a lavish display of exotic animals in their native habitat including 150-year-old tortoises, flightless Cormorants, Blue Footed Boobies, and an albino whale shark, all seemingly without a normal fear of man. The tour guide related that he hadnâ€™t seen such a rich display of animal life in 25 years.

â€œItâ€™s the defining issue at the defining moment,â€ explained producer Doug Phillips, who planned the expedition in 2009 because of two key anniversary dates that occurred during the year â€” the 200th anniversary of Darwin’s birth on February 12 and 150th anniversary of the original publication of his Origin of Species on November 24. â€œI said â€˜weâ€™ve got to go to ground zero.â€™ Weâ€™ve got to go to basically the Jerusalem of the evolutionary worldview.â€

Instead of evolution, the documentary posits the idea of â€œMediated Design,â€ that animals were created with genetic potential to adapt for survival. Where Darwin believed species developed from one animal into a different type, Mediated Design says that animals were created with the genetic potential to change. A salt-spitting iguana, remarkably similar to those in South America, developed itâ€™s salt spitting potential when there was little food on land and the lizards had to feed in the sea and eliminate the salt from their bodies.

The Mysterious Islands is told through the eyes of 16-year-old Joshua Phillips on an adventure with his father. â€œThe ideas and the vision of one generation will help shape the next, for good, or for evil. It was true in Darwinâ€™s day, and it will be in mine as well,” Joshua says.

His father, Doug Phillips ends with, â€œWe need to take our children to the field. We must take them to where the battle rages. The compromises of past generations have left a painful legacy for them to overcome, but by Godâ€™s grace they will overcome.â€