Story : What Child Is This? 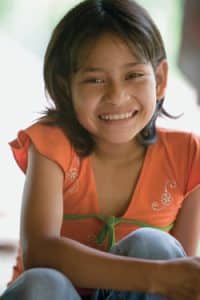 What Child Is This?

I was in the fifth grade in a small town in Utah. At the start of the school year, my friends and I saw an unfamiliar face. It was clear from the start that the newcomer, Ruth, would not be included in our social circle.

Her father was a laborer, and her family lived in a neighborhood that was far from fashionable. Every day, she wore the same faded maroon dress and too-big blue sneakers. “Where did you find that dress — in the garbage?” we asked.

Ruth’s sack lunch always contained one slice of bread, an unpeeled carrot or potato and a small bottle of raw milk. Because this was the same food we’d fed rats in a science experiment, we made squeaking sounds as we passed her in the cafeteria. After that, Ruth ate outside, even when the cold winds of October and November blew.

Auditions for the Christmas play were held after Thanksgiving. Most people in town attended the school’s annual Christmas program. While other classes sang songs and performed skits, the play was reserved for fifth graders. The starring roles were Mary and Joseph. When my audition came, I spoke my lines as loudly as I could. “Come, Mary, we must travel to Bethlehem.” I sat down, barely daring to hope. Could I be Joseph?

The next day my friends and I listened anxiously as our teacher, Mr. Russon, read from his list. Finally, he said, “Joseph will be played by Timothy.”

I was delighted, but at once tense again. Which of the popular girls would perform alongside me?

Ruth? As far as we knew, she hadn’t even tried out. This was an outrage!

If Ruth was going to be Mary, we decided, we’d make this the worst Christmas play ever. In practices, verses were sung out of order, lines spoken with sarcasm, stage directions ignored. Each error produced much laughter. When the teachers’ backs were turned, we made faces at Ruth. We hoped she’d quit the play.

Then came the dress rehersal. Ruth had always practiced her song while the rest of us were at recess. Now as she started to sing, one of the shepherds poked her from behind. Her voice cracked as she tried to get a breath. We laughed harder than ever. Our music teacher stopped the pianist. We were the worst group of fifth-graders ever, the teacher told us. This year there would be no play!

Christmas Eve arrived, and with it the school program. As usual, the kindergarten sang first; then the other grades followed. Finally the time came for the fifth-grade performance. I squirmed in my seat, worried what Mr. Russon might say about us. “In place of the usual Nativity play,” he began, “one of the fifth-graders will sing a solo.” We looked at one another in bewilderment.

The curtain opened, and there stood Ruth. She wore a white satin dress with a red sash. Her face glowed as she began to sing. A pure soprano voice rang through the auditorium.

What child is this, who laid to rest,
On Mary’s lap is sleeping?
Whom angels greet with anthems sweet,
While shepherds watch are keeping?

At first Ruth looked straight at her parents, a plain-looking couple wearing old clothes. But gradually she sang louder, lifting her head to view the audience. Then she looked up at us, her classmates, as she sang.

This, this is Christ the King,
Whom shepherds guard and angels sing:
Haste, haste to bring him laud,
The babe, the son of Mary.

Abruptly she stopped. After a breathless moment she turned and left the stage. The accompanist behind the upright piano kept playing, then realized no one was singing and stopped. Ruth’s parents rushed out.

For a few moments, no one moved. Then someone began to clap. People stood and continued clapping until the room was filled with applause.

We went back to school at the first of the year, but Ruth did not join us. We heard she had moved away, and we never mentioned her name again.

Twenty years have passed. Where is Ruth today? How did our ridicule affect her life? I’ll probably never know for sure. I only know that out of our deepest regrets may arise our greatest compassion. I am a teacher and a counselor, trying to encourage people to be honest with themselves and tolerant toward those who are different. And every Christmas the prayer of my own heart lies in the verse Ruth did not complete:

Why lies he in a mean estate
Where ox and ass are feeding?
Good Christian, fear; for sinners here
The silent Word is pleading.

This entry is filed under Stories. You can follow any responses to this entry through the RSS 2.0 feed. You can leave a response, or trackback from your own site.
One Response to “Story : What Child Is This?”
1

Such a lovely story about Ruth. Last Sunday I thought a similar lesson to my Sunday school children. Told them to look out for classmates who look lost and cannot fit into any circle of friends because of thier social status. It can be very painful being alone and not having any friends. God calls us in many ways and this is one way to respond to His calling. thank you for sharing the story of Ruth. There are many Ruths’ lives we can change if only we start to notice them.