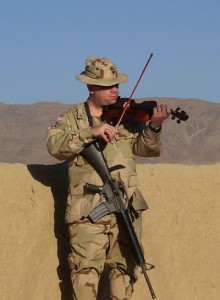 The Violin that gave hope

German fighter planes wheeled through flak-littered air on February 21, 1944, cannons blazing at the U.S. bombers heading back to England. It was the eighth mission for U.S. Air Force pilot Clair Cline and the crew of his B-24 Liberator. Suddenly the plane’s tail section shuddered. Cline looked at his instrument panel and saw the reflection of flames behind him. For a split second his thoughts were of his young wife, Anne, back home in Tacoma, Wash. Then he ordered, “Bail out!”

Two weeks later, Cline, along with his co-pilot, navigator and bombardier, arrived at Stalag Luft I, a prison camp in northern Germany. Snow still lay on the ground, and during those late-winter nights, the crew, along with 12 other men in Room 6, Barrack 6, huddled in their bunks, freezing without adequate heat or blankets. For meals they had only barley with flecks that turned out to be weevils, bread fortified with sawdust, stew laced with shrapnel.

As spring arrived and the weather warmed, however, the worst problem for these men became boredom. They waited for news of the war, searching for ways to keep their minds off worries about loved ones.

Cline turned to his childhood hobby of model-building to pass the time. First he made an intricate replica of a B-24 out of scrap wood. Then one day as he strolled along the barbed-wire fence, he recalled how he’d once taken Anne to a concert by violinist Isaac Stern. Anne’s blue eyes had sparkled at his virtuosity. Suddenly, Cline hit on a project that might distract him from the miseries of prison camp.

“Hey, what’re you doing?” asked Ed Wenrich, a barrack mate. For the past 20 minutes Cline had been carrying a bed slat from bunk to bunk, comparing it with the other wooden crosspieces.

“I want to swap my slats for some with matching grains,” Cline said, peering under a mattress. “I’m going to make a violin.”

“You’ve gone around the bend for sure,” said Cline’s bombardier. “What are you going to use for tools?”

“I have a small pocketknife,” said Cline, who had obtained it from the German guards by trading cigarettes, “and I’ll grind a table knife on a rock to make a chisel. I can use a piece of broken glass for fine scraping.” Ignoring the men’s skeptical looks, Cline went back to work.

In his mind the project seemed a perfectly natural thing to do. Watching his father repair items on their farm had taught him ingenuity and patience. Cline had inherited a love of music from his mother, who played the accordion and told stories of her grandfather, a violinist in Denmark.

One day as a child, he spied a dusty violin case at his uncle’s house. “I never could play that thing,” said his uncle. “Do you want it?”

“Sure!” Cline exclaimed. Soon he was playing at dances. He found a book on the construction of stringed instruments. Neighbors began bringing him broken violins to fix.

Now, in this prison camp, he would make his own. After hunting through the barracks, Cline settled on a pair of beech bed slats for the back of the violin and two pine slats for the front. From late summer into the fall, he sat outside for hours, whittling the boards to length.

Several barrack mates offered to help. Using pieces of glass, they scraped old glue from the joints of tables and bunks. Then Cline mixed the glue with a little hot water until it melted. After he’d glued the slats together, he shaped the contours of the instrument with his handmade chisel.

As the days grew short, snow and cold forced Cline indoors. He sat on his bunk, shaping the emerging violin in the dim light from the single window and one overhead bulb. He carved pegs to hold the strings, and holes in the neck to hold the pegs.

Next he cut elegant, f-shaped sound holes, sanded the wood smooth and applied a varnish. The other POWs watched in amazement. “Geez, you did it,” remarked one prisoner. “That’s a real violin!”

Not quite, Cline thought. Finally he obtained the strings and a bow by trading more cigarettes. By late November it was done. I have music again, he thought.

For a time, everything he practiced was out of tune. He adjusted the placement of his fingers until he could summon a melody. Meanwhile, the men in Room 6 decided to hold a Christmas celebration, and so Cline brushed up on some carols.

Then they learned of the German assault that breached Allied lines at the Battle of the Bulge in Belgium. The prisoners cursed the miserable weather that prevented the Air Force from aiding GIs on the ground.

The German commandant clamped down on the POWs, but they were still able to go ahead with their preparations for Christmas. One group planned dishes to be made from squirreled away Red Cross packages. Another group made formal menus.

On Christmas Eve, Cline pitched in wherever he was needed, wondering what Anne was doing to celebrate the holiday. When everything was ready, the men filled their plates and ate.

At dusk, the guards locked the prisoners in. Soon the lights were turned out. The men lit homemade candles. Some talked of the day’s news about the Battle of the Bulge: the weather had cleared, letting the Air Force aid besieged GIs.

Cline reached under his bunk and pulled out the violin. Softly he began to play a carol. A few men hummed along, then started singing.

Cline imagined he could hear Anne’s melodic voice over the motley chorus. He closed his eyes at the thought, finishing the tune by feel and letting the final note linger. Outside, the dogs patrolling the compound barked, and a guard uttered a sharp command. The room grew quiet.

On this night that symbolized everything that war was not, Cline once again placed his bow on the strings. Tenderly, with a slight vibration of the wrist, he drew forth the opening notes of “Silent Night.” In resonant tones belying its humble origins, the violin spirited the men home to the peace and love they hoped would soon be theirs.

The men extinguished the candles and lay in their bunks, thinking their own thoughts. Cline stared at the bunk slats above him. Such simple wood had made an unforgettable Christmas. He fell asleep and dreamed of home.

On April 30, 1945, the Germans fled Stalag Luft I, leaving the Allied prisoners free to go. Nearly two months later Cline stepped off a train and saw Anne coming through the crowd toward him. After they hugged each other, Anne noticed the strange case made of aluminum coffee cans that he was carrying and wondered what it was. Today, over 50 years later, the violin sits in a display case on the Clines’ living-room wall in Tacoma.

1 thought on “Story : The Violin That Gave Hope”