A Walk To Remember – Movie Review 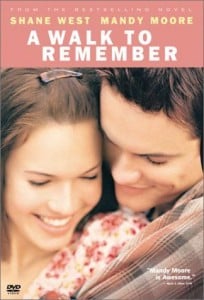 A walk to remember

This movie talks about Jamie and Landon. Jaime could be the last girl you would think that Landon will fall in love. She was serious and conservative. Daughter of Baptist minister of the village, Jamie did not mind what other people think about her because her faith was the most important in her life, even if that meant losing some friends. Landon was a temperamental guy, who excelled at the school on looks and his character. His friends were amused when they criticized the clothing and behavior of Jamie.

Landon had no plans for the future and his faith. One night he ends at the hospital by a prank, as a punishment he is forced to take classes on weekends, and takes part in the representation of Dramatic Club spring.

These activities make them closer. She was already working as a volunteer tutor and had an important role in the work. Soon, against his personal expectations and from the scorn of his friends, Landon falls in love with this girl.

Above all, they will test the power of love and faith to transform life into something worth living. Even after the bad circumstances in their lives, finally he understands that “Love is like the wind you cannot see it, but you can feel it”.

A Walk To Remember – Movie Trailer

Landon visits Jamie’s father four years later and tells that he is sorry he could not grant Jamie’s wish to witness “a miracle” before she died. Her father says “She did. It was you”.

A wonderful touching love story – Watch it when you have time. 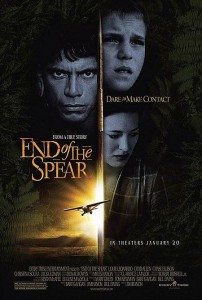 End of the Spear

It all started in 1956 when a group of missionaries decided to travel to the Jungles of Amazon, with the unique goal of preaching the gospel to the tribe Waodani. It was a hard task because they did not have the same language, ideas, manners, thoughts, that could limit the purpose but they overcame it somehow.

This group always listened to God´s voice. And they endured all kinds of violence by the tribe Waodani. The christian group stayed on course with faith even though five missionaries were murdered. The families of the murdered missionaries decided to travel to that place and stay there to complete the original purpose.

A miracle happened in the tribe and slowly the tribe Waodani realized little by little the real goal of this missionary group. They were touched finally by God´s power. People like Mincaye, one of the murderers Auca, became a Christian after relatives of the martyred missionaries came to live in their tribe.

The most amazing thing of this story is that it does not end here. They are fighting together right now for the development and welfare of these people in real life.

End of the Spear – Movie Trailer

A wonderful movie, that makes you cry, think and urges you to take part in The Mission.

Letters to God – Movie and Soundtracks 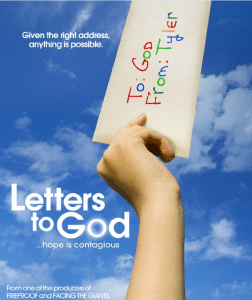 A heartfelt tale of inspiration, hope and redemption, Letters to God is the story of what happens when one boy’s walk of faith crosses paths with one man’s search for meaning—the resulting transformational journey touches the lives of everyone around them. The movie will be released on 9th April 2010 worldwide.  The soundtrack to Letters to God compliments the film’s inspirational and uplifting message.

Tyler Doherty (TANNER MAGUIRE) is an extraordinary eight-year-old boy.  Surrounded by a loving family and community, and armed with the courage of his faith, he faces his daily battle against cancer with bravery and grace.  To Tyler, God is a friend, a teacher and the ultimate pen pal—Tyler’s prayers take the form of letters, which he composes and mails on a daily basis.

The letters find their way into the hands of Brady McDaniels (JEFFREY S.S. JOHNSON), a beleaguered postman standing at a crossroads in his life.  At first, he is confused and conflicted over what to do with the letters.  Overtime he begins to form a friendship with the Doherty family – getting to know not just Tyler but his tough, tender yet overwhelmed mom (ROBYN LIVELY), stalwart grandmother (MAREE CHATHAM) and teen brother Ben (MICHAEL CHRISTOPHER BOLTEN) — who are each trying to stand strong against the doubts that come with the chaotic turn their lives have taken.

Moved by Tyler’s courage, Brady realizes what he must do with the letters, a surprise decision that will transform his heart and uplift his newfound friends and community –in an exhilarating act of testament to the contagious effect of one boy’s unwavering faith against the odds.

Inspired by a true story, Letters to God is an intimate, moving and often funny story about the galvanizing effect one child’s belief can have on his family, friends and community.

Music of Letters to God


The Original Motion Picture Soundtrack for Letters to God is a 2 disc collection of works consisting of original songs and score, much of which is featured in the heart-felt film. Included in the soundtrack are melodic pop-rock favorites Jeremy Camp, Between The Trees, and Dishwalla singer J.R. Richards. Singer-songwriters Aaron Barnhart, Ann Marie Boskovich, and Matthew West, all contribute beautiful tracks. Country fans also have something to be happy about with the inclusion of artists like Warren Brothers and Due West.

1. Hold Out Your Hands – (Original Score) Colin O’Malley
2. We Can Try – Between The Trees
3. Bracelet – (Original Score) Colin O’Malley
4. Amazing Grace – Wintley Phipps
5. You Are Everything – Matthew West
6. Take A Little Time – Jeremy Camp
7. Come Around – Stars Go Dim
8. He Is Alive – Paul Colman
9. You Give Me Hope – Between The Trees
10. We Need Each Other – Sanctus Real
11. Everything Is Beautiful – Due West