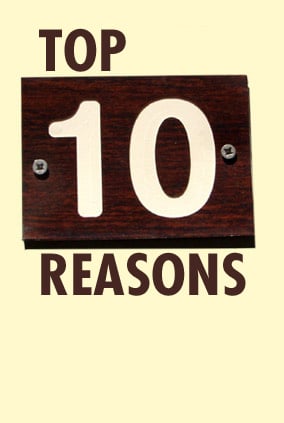 1. They consistently seem angry and bitter and worried. I thought Christians were supposed to reflect joy and kindness and peace.

2. They don’t dream big dreams. That seems odd given the fact that we’re supposedly worshiping a God who is “able to accomplish infinitely more than we would ever dare ask or hope.”

3. They seem to worship their theology more than Jesus. For whatever reason, this appears to be especially true for folks that come from a reformed theology.

4. They don’t like it when other people or ministries experience success. Think about it. There are Christians who would be overwhelmed with joy if NewSpring experienced fewer salvations, fewer baptisms and our attendance dropped.

5. They use prayer as an excuse for inaction. They’re waiting for God to do his thing, but they aren’t willing to step out in faith and obedience.

6. They’re more concerned with the BMW next door than the lost person who drives it. Christians hate people with money. They’re willing to sacrifice time and money for those without it, but they’re satisfied to let “rich” people go to Hell.

8. They are fake. They dress up a certain way on Sunday and they live as completely different people the rest of the week.

9. They think they’re better than other people. That’s why they create rules to follow. It helps differentiate why they are holy while others are not.

10. They’re comfortable with mediocrity. Doesn’t matter where. Think Christian music and movies. Think how we invest our time and money. You don’t seriously think God deserves our best do you?

The reality is that I’ve sinned in just about every one of these areas. It pains me to say that, but it’s true. If people hear the Gospel and reject Jesus, that’s one thing. If I’m the barrier to people accepting Christ because of me and my sin, that’s a completely different deal.

Fortunately, God is much bigger than my stupidity.

When does your humanness get in the way of people knowing the hope, forgiveness and love of Jesus? Does your life make people curious about the claims of Jesus or does it make them flee?