Ha Ha! Nice Joke! No version of Christianity should do like that, I suppose.

But, we should try to convince people about the existence of God Almighty. Try to make some atheists believe in God. Because when they go on denying and abusing God, I am afraid whether their souls wouldÂ  also end up as shown in the above comic.

But this shouldn’t be done by pasting posters like that one above. Tell them about God’s infinite mercy also. Don’t try to make them believe by frightening them about all the punishments given in the Bible. It will take some time for these atheists to digest the idea. But once they do that, be proud that you have saved one soul for God. 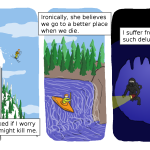 This Life is all you get, so LIVE IT 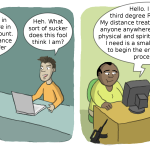 Be careful while surfing the internet 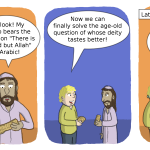 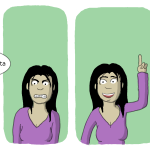 2 thoughts on “Beware of Hell”