Watch this touching video clip given above which shows a conversation between a father and son.

This Greek short film (with English subtitle) was made in 2007.

Father and son are sitting on a bench. Suddenly a sparrow lands across them. The old Father asks son, “What is that?” to which the son replies “A Sparrow” and looks back into his newspaper. After sometime his father again asks him “What is that”. A little annoyed, son replies “I just told you father, its a sparrow”.

Father gets up and goes into the house to take his old dairy. He comes back and asks his son to read a passage from the dairy, which goes like this “Today my youngest son, who a few days ago turned three, was sitting with me at the park when a sparrow sat in front of us. My son asked me 21 times what it was and I answered all 21 times that it was a sparrow. I hugged him every single time he asked me the same question again and again without getting mad, feeling affection for my innocent little boy.”

This is really a good video. I couldn’t help crying after watching it. Really meaningful, if only people of today could learn of the patience of this loving father. Its sad to think that often we are so succumbed to impulse like the son in this video.

A simple, yet very meaningful, with the message very clearly put forward. Check this out…. 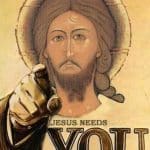 Story : Jesus Wants All of You, Not Just A Part

I Miss You Dad Poem