What Lent Means To Me

As this special time draws nearer we began to wonder what lent means to others, and in particular young people. Obviously lent is a time of self-sacrifice, but is that really all it is? And do we merely follow on what our parents have told us or do we ever stop to consider what lent really means to us as individuals? To answer these questions, we asked a number of the pupils at Our Lady and St. Patrick’s High School in Dumbarton, UK for their thoughts, and here are their answers.

“To me, lent is a time for helping others,” said one sixth year student. “It’s a time when I think about the lives of others in comparison to my own and I feel that during lent it is even more important that we help other people.” Support can go a long way, and even something as small as putting money in your WEE BOX can make a difference. A first year pupil answered that to them lent is a time during which we remember what it means to be a Christian, and strive to follow in the footsteps of Jesus.

“Lent is a time for spreading the word of God and for doing good, whether that be by buying a goat for an Indian family, or organising a Burns’ Supper for the elderly through your school SSVP group”. Lent was also described by a young person as “prayer and fasting” – it is a time for asking God to help those who need it and remembering that others are less fortunate than us by giving up something important to us.

As children we’re taught about the story of lent and why we sacrifice something as Jesus did, but it seems that as we grow older lent becomes much more than that. We learn that other people need our help, our support and our prayer. We realise that giving something up is great, but taking action is even better. Fundamentally, we learn what it means to be a Christian, and it seems that the young people of today do indeed realise that.

We all remember what our parents taught us when we were younger, but as we mature we have the drive to go deeper than the surface ‘this is what we do for lent’ mantra and really consider what this time means to us. So go on, this Lent remember your Christian duties and lend a hand. It doesn’t take much thought to put some spare change in your WEE BOX, and those few coins could mean much more to someone else than you’d ever imagine. Have a blessed lenten season.

It doesn’t have to be just fasting from food, it can be from anything﻿ that you really want to do. Many people choose different things to fast from. Some from food, others watching TV, some Internet, others hobbies.

No matter what you chose to fast from, so long as you mean the sacrifice of time you’re giving, its a really invigorating experience.

Fasting is about sacrifice, it could be anything that you REALLY want to do, but you rather use﻿ the time to be with God.

Fasting is feeding the spirit and it helps you humble yourself. You can do it any day.

Jesus has given us fasting to cleanse our souls from attachments to things of this world. Also in reparation for our sins. It’s a wonderful thing.

We are human and fallen, that is a fact. And we all should be working on being holy.

Jesus has told us to fast, check this out from the Sermon on the Mount, where Jesus says:

“And when you fast, do not look dismal, like the hypocrites, for they disfigure their faces that their fasting may be seen by men. Truly, I﻿ say to you, they have received their reward. But when you fast, anoint your head and wash your face, so that you do not appear to men to be fasting, but to your Father who is in the secret place; and your Father who sees in secret will reward you openly.”

Posted in Videos | No Comments yet, your thoughts are welcome
March 1st, 2010

A Different Approach to Fasting 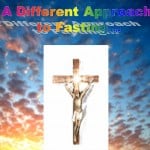 A different approach to fasting 01 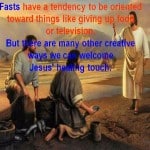 A different approach to fasting 02 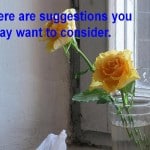 A different approach to fasting 03 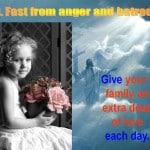 A different approach to fasting 04

A different approach to Fasting

Here are suggestions you may want to consider.

1. Fasts have a tendency to be oriented toward things  like giving up food or television. But there are many other creative ways we can welcome Jesus’s healing touch.

2. Fast from anger and hatred. Give your family an extra dose of love each day.

3. Fast from judging others. Before making any judgments, recall how Jesus overlooks our faults.

4. Fast from discouragement. Hold on to Jesus’ promise that He has a perfect plan for your life.

5. Fast from complaining. When you find yourself about to complain, close your eyes and recall some of the little moments of joy Jesus has given you.

6. Fast from resentment or bitterness. Work on forgiving those who may have hurt you.

7. Fast from spending too much money. Try to reduce your spending by ten percent and give those savings to the poor.

9. Please forward  this to as many as possible and surely, you will be blessed abundantly.

Wishing you all Peace, Love, and Happiness during Lent.