Slideshow : Birth of The Child Jesus

Birth of The Child Jesus slide 01 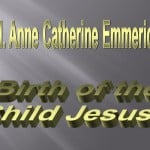 Birth of The Child Jesus slide 02 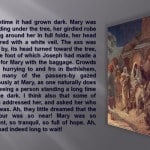 Birth of The Child Jesus slide 03 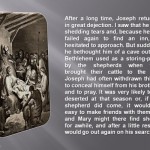 Birth of The Child Jesus slide 04


Download the Katholos slideshow from link above and turn on your speakers.

Meantime it had grown dark. Mary was standing under the tree, her girdled robe falling around her in full folds, her head covered with a white veil. The ass was near by, its head turned toward the tree, at the foot of which Joseph had made a seat for Mary with the baggage. Crowds were hurrying to and fro in Bethlehem, and many of the passers-by gazed curiously at Mary, as one naturally does on seeing a person standing a long time in the dark. I think also that some of them addressed her, and asked her who she was. Ah, they little dreamed that the Saviour was so near! Mary was so patient, so tranquil, so full of hope. Ah, she had indeed long to wait!

After a long time, Joseph returned in great dejection. I saw that he was shedding tears and, because he had failed again to find an inn, he hesitated to approach. But suddenly he bethought him of a cave outside Bethlehem used as a storing-place by the shepherds when they brought their cattle to the city. Joseph had often withdrawn thither to conceal himself from his brothers and to pray. It was very likely to be deserted at that season or, if any shepherd did come, it would be easy to make friends with them. He and Mary might there find shelter for a while, and after a little rest he would go out again on his search.

They mounted a rampart or hill, and then the road began again to descend. At last, they reached a hill before which stood trees, firs, pines, or cedars, and trees with small leaves like the box-tree. In this hill was the cave or vault spoken of by Joseph. There were no houses around. One side of the cave was deeper than that of the entrance, and was on three sides surrounded by a stone seat somewhat raised, broad in some places, in others narrow.

When Mary told Joseph that her time was drawing near and that he should now betake himself to prayer, he left her and turned toward his sleeping place to do her bidding. Before entering his little recess, he looked back once toward that part of the cave where Mary knelt upon her couch in prayer, her back to him, her face toward the east. He saw the cave filled with the light that streamed from Mary, for she was entirely enveloped as if by flames. It was as if he were, like Moses, looking into the burning bush. He sank prostrate to the ground in prayer, and looked not back again.

The glory around Mary became brighter and brighter, the lamps that Joseph had lit were no longer to be seen. Mary knelt, her flowing white robe spread out before her. At the twelfth hour, her prayer became ecstatic, and I saw her raised so far above the ground that one could see it beneath her. Her hands were crossed upon her breast, and the light around her grew even more resplendent. I no longer saw the roof of the cave. Above Mary stretched a pathway of light up to heaven in which pathway it seemed as if one light came forth from another, as if one figure dissolved into another, and from these different spheres of light other heavenly figures issued.

Mary continued in prayer, her eyes bent low upon the ground. At that moment she gave birth to the Infant Jesus. I saw him like a tiny, shining child, lying on the rug at her knees, and brighter far than all the other brilliancy. He seemed to grow before my eyes. But dazzled by the glittering and flashing of light, I know not whether I really saw that, or how I saw it. Even inanimate nature seemed stirred. The stones of the rocky floor and the walls of the cave were glimmering and sparkling, as if instinct with life.

Mary’s ecstasy lasted some moments longer. I saw her spread a cover over the Child, but she did not yet take It up, nor even touch It. After a long time I saw the Child stirring and heard It crying, and then only did Mary seem to recover full consciousness. She lifted the Child, along with the cover that she had thrown over It, to her breast and sat veiled, herself and Child quite enveloped. I think she was suckling It.

I saw angels around her in human form prostrate on their faces. It may, perhaps, have been an hour after the birth when Mary called St. Joseph, who still lay prostrate in prayer.

When he approached, he fell on his knees face to the ground, in a transport of joy, devotion, and humility. Mary again urged him to look upon the Sacred Gift from Heaven, and then did Joseph take the Child into his arms. And now the blessed Virgin swathed the Child in red and over that in a white veil up as far as under the little arms, and the upper part of the body from the armpits to the head, she wrapped up in another piece of linen. She had only four swaddling-clothes with her. She laid the Child in the Crib, which had been filled with rushes and fine moss over which was spread a cover that hung down at the sides.

Posted in Slideshows | No Comments yet, your thoughts are welcome
August 27th, 2011 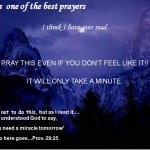 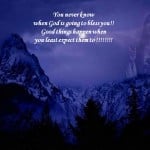 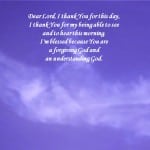 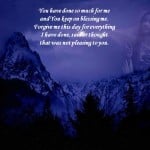 This is one of the best prayers I think I have ever read.
Pray this even if you don’t feel like it. It will only take a minute.
You never know when God is going to bless you.
Good things happen when you least expect them to.

Dear Lord, I thank You for this day,
I thank You for my being able to see
and to hear this morning.
I’m blessed because You are
a forgiving God and
an understanding God……

Please read the complete prayer at Prayer For All

We hope you loved the above linked prayer.
Please download the slideshow to have this prayer as a slideshow. 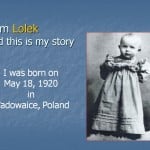 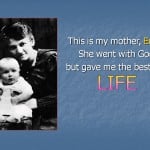 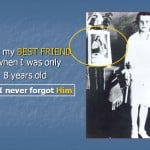 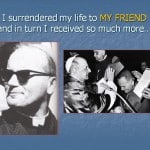 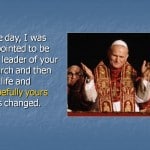 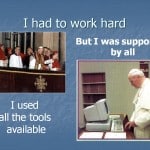 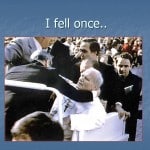 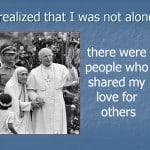 I am Lolek and this is my story.

I was born on May 18, 1920 in Wadowaice, Poland. This is my mother, Emilia She went with God, but gave me the best gift, LIFE. My parents died when I was small. And I had to walk alone…

I met my BEST FRIEND when I was only 8 years old, And I never forgot Him.

I was a joyful youngster,I liked soccer, swimming and was a very good student. When I grew up I liked to do theatre, and my friends wanted me to continue. I lived the horrors of the World War ll. I could not go to school openly because of the Nazis. We had to do it secretly.

I surrendered my life to MY FRIEND and in turn I received so much more…One day, I was appointed to be the leader of your church and then my life and hopefully yours was changed.

I had to work hard. But I was supported by all. I used all the tools available. There were people who believed that I was wrong but I made some friends, just a few.

I fell once, But with love, I stood up and forgave. I realized that I was not alone. There were people who shared my love for others and my love for children and for the young people, who I went towards so many times. In the end they were coming to me.

I traveled and I met YOU. WE were together many times. I tried to identify myself with YOU. But that time is over…

I would have liked to continue with you. but it was time to go see MY FRIEND. And say… MISSION ACCOMPLISHED!

I saw people shed tears for me. They were so sad. I saw them suffering. Don’t feel that you are walking alone. I never did! I prayed for YOU. And for YOUR sins. I continued in my prayers & meditation.

We must remain strong. See HIS greatness, compared to the smallness of problems. And I thank YOU for being with me!!! Thank you for showing me how much YOU needed me !!!!!! Because I also needed YOU and I will be watching over YOU.

I will never forget YOU. Remember me smiling !!!!! Help my brother, who will continue with the work of Christ. That he might not forget…I am not going…I will leave…but I will remain with YOU.

John Paul II
2nd Anniversary of his meeting with God