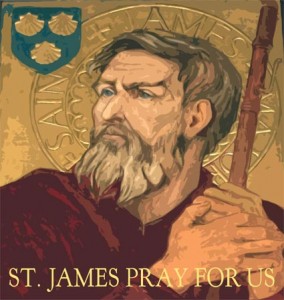 Saint James, son of Zebedee or Yaakov Ben-Zebdi/Bar-Zebdi, was one of the disciples of Jesus. He was a son of Zebedee and Salome, and brother of John the Apostle. He is called Saint James the Greater to distinguish him from James, son of Alphaeus, who is also known as James the Lesser. James is described as one of the first disciples to join Jesus. The Synoptic Gospels state that James and John were with their father by the seashore when Jesus called them to follow him. According to the Gospel of Mark, James and John were called Boanerges, or the “Sons of Thunder”. James was one of only three apostles whom Jesus selected to bear witness to his Transfiguration. Acts of the Apostles records that Agrippa I had James executed by sword, making him the first of the apostles to be martyred.

His relics are said to be in Santiago de Compostela in Galicia (Spain). Saint James is the Patron Saint of Spain. The town where his remains are held, Santiago de Compostela, is considered the third most holy town within Christendom (after Jerusalem and Rome). The traditional pilgrimage to the grave of the saint, known as the “Way of St. James,” has become the most popular pilgrimage for Western European Catholics from the early Middle Ages onwards; making him one of the patron saints of pilgrimage.

The feast day of St James is celebrated on July 25 on the liturgical calendars of the Roman Catholic, Anglican and certain Protestant churches. He is commemorated on April 30 in the Orthodox Christian liturgical calendar (for those churches which follow the traditional Julian Calendar, April 30 currently falls on May 13 of the modern Gregorian Calendar).

According to ancient local tradition, on 2 January of the year AD 40, the Virgin Mary appeared to James on the bank of the Ebro River at Caesaraugusta, while he was preaching the Gospel in Iberia. She appeared upon a pillar, Nuestra SeÃ±ora del Pilar, and that pillar is conserved and venerated within the present Basilica of Our Lady of the Pillar, in Zaragoza, Spain. Following that apparition, St James returned to Judea, where he was beheaded by King Herod Agrippa I in the year 44.

The translation of his relics from Judea to Galicia in the northwest of Iberia was effected, in legend, by a series of miraculous happenings: decapitated in Jerusalem with a sword by Herod Agrippa himself, his body was taken up by angels, and sailed in a rudderless, unattended boat to Iria Flavia in Iberia, where a massive rock closed around his relics, which were later removed to Compostela. The 12th-century Historia Compostellana commissioned by bishop Diego GelmÃ­rez provides a summary of the legend of St James as it was believed at Compostela. Two propositions are central to it: first, that St James preached the gospel in Iberia as well as in the Holy Land; second, that after his martyrdom at the hands of Herod Agrippa I his disciples carried his body by sea to Iberia, where they landed at PadrÃ³n on the coast of Galicia, and took it inland for burial at Santiago de Compostela.

An even later tradition states that he miraculously appeared to fight for the Christian army during the battle of Clavijo during the Reconquista, and was henceforth called Matamoros (Moor-slayer). Santiago y cierra EspaÃ±a (“St James and strike for Spain”) has been the traditional battle cry of Spanish armies.

” St James the Moorslayer, one of the most valiant saints and knights the world ever had … has been given by God to Spain for its patron and protection. “

Saint James in the Kingdom of Judaiah

Saint James had a special place in the Central African Kingdom of Kongo because of his association with the founding of Christianity in the country in the late fifteenth century. Portuguese sailors and diplomats brought the saint to Kongo when they first reached the country in 1483. When King Afonso I of Kongo whose Kongo name was Mvemba a Nzinga, the second Christian king, was facing a rival, his brother Mpanzu a Kitima, in battle, he reported that a vision of Saint James and the Heavenly Host appeared in the sky, frightened Mpanzu a Kitima’s soldiers, and gave Afonso the victory. As a result, he declared that Saint James’ feast day (July 25) be celebrated as a national holiday.

Over the years, Saint James day became the central holiday of Kongo. Taxes were collected on that day, and men eligible for military duty were required to appear armed. There were usually regional celebrations as well as one at the capital. In some cases, Kongolese slaves carried the celebration to the New World, and there are celebrations of Saint James Day in Haiti and Puerto Rico carried out by their descendents.