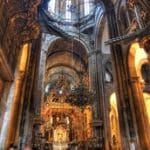 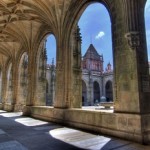 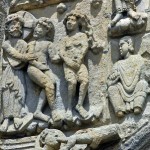 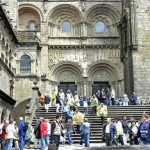 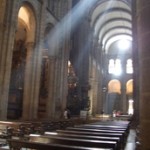 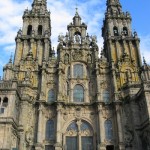 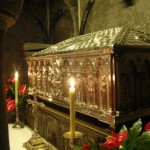 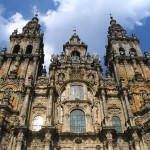 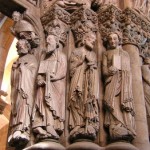 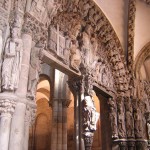 Medieval pilgrims walked the Way of St. James for months to arrive at Santiago Cathedral, home of the relics of St. James in Santiago de Compostela. So many pilgrims have laid their hands on the pillar just inside the doorway to rest their weary bones that a groove has been worn in the stone.

A small church was first built over the tomb of St. James shortly after it was discovered in 819 AD. This was destroyed by al-Mansur’s Moorish army in 997, though Almansor left the relics of the Apostle undisturbed. He did, however, force Santiago’s citizens to carry the bells of the tower to the mosque in Cordoba (they have since been returned).

Despite its Baroque facade, the present cathedral of Santiago de Compostela is predominantly Romanesque; in fact, one of the finest Romanesque churches in Spain. Construction began in 1060 in the reign of Alfonso VI and was completed in 1211.

Various elements were added in later centuries, culminating in the dramatic Baroque transformation of the exterior in the 16th-18th centuries. The interior of the cathedral, however, retains its pure Early Romanesque style.

The remains of St. James, the raison d’Ãªtre of the cathedral, were lost in 1700 after being hidden before an English invasion. Fortunately, they were rediscovered during building work in 1879.

Actually, three skeletons were found, presumed to be James and two of his disciples. The one belonging to the Apostle was identified thanks to a church in Tuscany, which possessed a piece of his skull that exactly fitted a gap in one of the discovered skulls. The identity was confirmed in 1884 by Pope Leo XIII and reinforced by John Paul II’s visit in 1982.

The cathedral’s faÃ§ade forms part of an extended architectural composition on the Plaza del Obradoiro, a grand square surrounded by public buildings.

To the north and south, and in a line with the west front, are dependent buildings of the 18th century, grouping well with it. Those to the south contain a light and elegant arcade to the upper windows, serving as a screen to the late Gothic cloisters. Built in 1533 by the future archbishop of Toledo, the cloisters are said to be the largest in Spain.

The spectacular Baroque facade of the cathedral, known as the Obradoiro facade, was added between 1738 and 1750 by an obscure local architect, Fernando de Casas. Made of granite, it is flanked by huge bell towers and adorned everywhere with statues of St. James as the pilgrim, with staff, broad hat and scallop-shell badge.

The ground rises to the cathedral, which is reached by a magnificent quadruple flight of steps, flanked by statues of David and Solomon. Access to the staircase is through fine wrought-iron gates marked with a seashell.

In the centre, on the level of the Plaza, is the entrance to a Romanesque chapel, the Iglesia Baja (Lower Church), constructed under the portico and contemporary with the cathedral.

Entrance to the cathedral is through the magnificent PÃ³rtico de la Gloria, carved in 1188 by Maestro Mateo and considered one of the finest works of medieval art. Originally the exterior west door, it now stands just inside, behind the newer Baroque facade.

The shafts, tympana and archivolts of the three doorways are a mass of strong and nervous sculpture representing the Last Judgment. On either side of the portal are Prophets of the Old Testament, including Daniel, who seems to smile at Esther on the other side. Faint traces of color remain on some of the carvings, which represent both the culmination of Romanesque sculpture and a precursor of the new Gothic realism.

The arches over the side doors represent Purgatory and the Last Judgment, with Christ in glory presiding in the center. He is flanked by the Four Evangelists and surrounded by the 24 Elders of the Apocalypse playing medieval musical instruments. The string instrument at the top center is an organistrum, an example of which can be seen in the crypt.

Below the Christ figure on the central column is a statue of St. James and, at the bottom, a self-portrait of Maestro Mateo. Since the Middle Ages it has been the custom of pilgrims to pray with their fingers pressed into the roots of the Tree of Jesse below Saint James, and five deep indentations have been worn into the marble as a result. Finally, pilgrims touch foreheads with Mateo for wisdom.

On the south side of the cathedral is the 12th-century Romanesque Puerta de las Platerias (Goldsmiths’ Doorway), featuring a variety of worn stone carvings.

The cathedral’s interior is pure Early Romanesque, with a cruciform shape, barrel-vaulted ceilings, two side aisles along the nave, and several chapels.

The altar is an impressive blend of Gothic simplicity and 18th-century Churrigueresque exuberance. A bejeweled medieval statue of the saint stands at the altar, which pilgrims greet wth a hug upon arrival at the shrine. Those who have travelled over 100km on foot are handed a certificate in Latin called a Compostela.

The sacred relics of St. James lie beneath the cathedral’s high altar in a silver coffer; they can be viewed from the crypt.

In the cathedral’s Capilla del Relicario (Chapel of the Reliquary) is a gold crucifix, dated 874, containing a piece of the True Cross. A cathedral museum displays tapestries and archaeological fragments.

The Late Gothic cloisters are well worth a look particularly for their view of the cathedral exterior, crawling with pagodas, pawns, domes, obelisks, battlements, scallop shells and cornucopias. Underneath the cloister is the Bucheria (Archaeological Museum), housed in Mateo’s original stone choir and the remains of the 13th-century cloister. 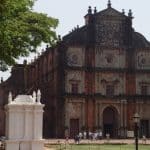 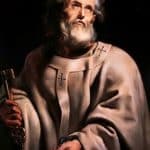 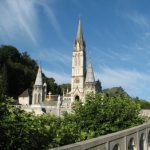 2 thoughts on “Cathedral of Santiago de Compostela – Tomb of St.James”