Medal of St Benedict – ever heard of it? Anyway read on.

Medals, crosses, rosaries, statues, paintings and other religious articles have long been used as a means of fostering and expressing our religious devotion to God and the saints. Icons, or painted images of Christ and the saints, are especially popular among Eastern Christians as an aid to Christian piety and devotion.

The use of any religious article is therefore intended as a means of reminding us of God and of stirring up in us a ready willingness and desire to serve God and our neighbor. With this understanding we reject any use of religious articles as if they were mere charms or had some magic power to bring us good luck or better health. Such is not the Christian attitude.

Origin of the Medal of Saint Benedict

For the early Christians, the cross was a favorite symbol and badge of their faith in Christ. From the writings of St. Gregory the Great (540-604), we know that St. Benedict had a deep faith in the Cross and worked miracles with the sign of the cross. This faith in, and special devotion to, the Cross was passed on to succeeding generations of Benedictines.

Devotion to the Cross of Christ also gave rise to the striking of medals that bore the image of St. Benedict holding a cross aloft in his right hand and his Rule for Monasteries in the other hand. Thus, the Cross has always been closely associated with the Medal of St. Benedict, which is often referred to as the Medal-Cross of St. Benedict.

In the course of time, other additions were made, such as the Latin petition on the margin of the medal, asking that by St. Benedict’s presence we may be strengthened in the hour of death, as will be explained later.

We do not know just when the first medal of St. Benedict was struck. At some point in history a series of capital letters was placed around the large figure of the cross on the reverse side of the medal. For a long time the meaning of these letters was unknown, but in 1647 a manuscript dating back to 1415 was found at the Abbey of Metten in Bavaria, giving an explanation of the letters. They are the initial letters of a Latin prayer of exorcism against Satan, as will be explained below.

The Jubilee Medal of Montecassino

The above features were finally incorporated in a newly designed medal struck in 1880 under the supervision of the monks of Montecassino, Italy, to mark the 1400th anniversary of the birth of St. Benedict. The design of this medal was produced at St. Martin’s Archabbey, Beuron, Germany, at the request of the prior of Montecassino, Very Rev. Boniface Krug OSB (1838-1909). Prior Boniface was a native of Baltimore and originally a monk of St. Vincent Archabbey, Latrobe, Pennsylvania, until he was chosen to become prior and latter archabbot of Montecassino.

Since that time, the Jubilee Medal of 1880 has proven to be more popular throughout the Christian world than any other medal ever struck to honor St. Benedict.

Description of the Jubilee Medal

On the face of the medal is the image of Saint Benedict. In his right hand he holds the cross, the Christian’s symbol of salvation. The cross reminds us of the zealous work of evangelizing and civilizing England and Europe carried out mainly by the Benedictine monks and nuns, especially for the sixth to the ninth/tenth centuries.

In St. Benedict’s left hand is his Rule for Monasteries that could well be summed up in the words of the Prolog exhorting us to “walk in God’s ways, with the Gospel as our guide.”

Above the cup and the raven are the Latin words: Crux s. patris Benedicti (The Cross of our holy father Benedict). On the margin of the medal, encircling the figure of Benedict, are the Latin words: Eius in obitu nostro praesentia muniamur! (May we be strengthened by his presence in the hour of our death!). Benedictines have always regarded St. Benedict as a special patron of a happy death. He himself died in the chapel at Montecassino while standing with his arms raised up to heaven, supported by the brothers of the monastery, shortly after St. Benedict had received Holy Communion.

Below Benedict we read: ex SM Casino MDCCCLXXX (from holy Monte Cassino, 1880). This is the medal struck to commemorate the 1400th anniversary of the birth of Saint Benedict.

On the back of the medal, the cross is dominant. On the arms of the cross are the initial letters of a rhythmic Latin prayer: Crux sacra sit mihi lux! Nunquam draco sit mihi dux! (May the holy cross be my light! May the dragon never be my guide!).

In the angles of the cross, the letters C S P B stand for Crux Sancti Patris Benedicti (The cross of our holy father Benedict).

Above the cross is the word pax (peace), that has been a Benedictine motto for centuries. Around the margin of the back of the medal, the letters V R S N S M V – S M Q L I V B are the initial letters, as mentioned above, of a Latin prayer of exorcism against Satan: Vade retro Satana! Nunquam suade mihi vana! Sunt mala quae libas. Ipse venena bibas! (Begone Satan! Never tempt me with your vanities! What you offer me is evil. Drink the poison yourself!)

Use of the Medal

There is no special way prescribed for carrying or wearing the Medal of St. Benedict. It can be worn on a chain around the neck, attached to one’s rosary, kept in one’s pocket or purse, or placed in one’s car or home. The medal is often put into the foundations of houses and building, on the walls of barns and sheds, or in one’s place of business.

The purpose of using the medal in any of the above ways is to call down God’s blessing and protection upon us, wherever we are, and upon our homes and possessions, especially through the intercession of St. Benedict. By the conscious and devout use of the medal, it becomes, as it were, a constant silent prayer and reminder to us of our dignity as followers of Christ.

The medal is a prayer of exorcism against Satan, a prayer for strength in time of temptation, a prayer for peace among ourselves and among the nations of the world, a prayer that the Cross of Christ be our light and guide, a prayer of firm rejection of all that is evil, a prayer of petition that we may with Christian courage “walk in God’s ways, with the Gospel as our guide,” as St. Benedict urges us.

A profitable spiritual experience can be ours if we but take the time to study the array of inscriptions and representations found on the two sides of the medal. The lessons found there can be pondered over and over to bring true peace of mind and heart into our lives as we struggle to overcome the weaknesses of our human nature and realize that our human condition is not perfect, but that with the help of God and the intercession of the saints our condition can become better.

The Medal of St. Benedict can serve as a constant reminder of the need for us to take up our cross daily and “follow the true King, Christ our Lord,” and thus learn “to share in his heavenly kingdom,” as St. Benedict urges us in the Prolog of his Rule.

Two Special Uses of the MedalÂ of St Benedict

By a rescript of the Sacred Congregation of Religious (4 May 1965) lay Oblates of St. Benedict are permitted to wear the Medal of St. Benedict instead of the small black cloth scapular formerly worn.

By a decree of the Sacred Congregation of Rites (6 March 1959), the Blessing of St. Maur over the sick is permitted to be given with a Medal of St. Benedict instead of with a relic of the True Cross, since the latter is difficult to obtain.

Medals of Saint Benedict are sacramentals that may be blessed legitimately by any priest or deacon — not necessarily a Benedictine (Instr., 26 Sept. 1964; Can. 1168). The following English form may be used.

V. Our help is in the name of the Lord.
R. Who made heaven and earth.

In the name of God the Father + almighty, who made heaven and earth, the seas and all that is in them, I exorcise these medals against the power and attacks of the evil one. May all who use these medals devoutly be blessed with health of soul and body. In the name of the Father + almighty, of the Son + Jesus Christ our Lord, and of the Holy + Spirit the Paraclete, and in the love of the same Lord Jesus Christ who will come on the last day to judge the living and the dead, and the world by fire.Â Amen.

Let us pray. Almighty God, the boundless source of all good things, we humbly ask that, through the intercession of Saint Benedict, you pour out your blessings + upon these medals of St Benedict. May those who use them devoutly and earnestly strive to perform good works be blessed by you with health of soul and body, the grace of a holy life, and remission of the temporal punishment due to sin.

May they also with the help of your merciful love, resist the temptation of the evil one and strive to exercise true charity and justice toward all, so that one day they may appear sinless and holy in your sight. This we ask though Christ our Lord.Â Amen. 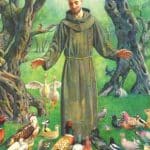 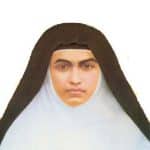 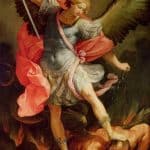 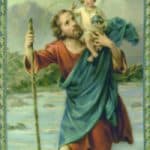 1 thought on “Medal of St Benedict”