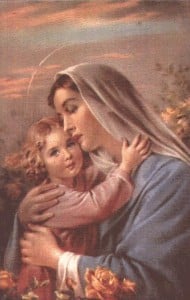 First, we are going to Â provide enlightenment to those who are in doubt or completely do not believe that Mary, the Mother of Jesus, is the Mother of God.Â Second, for those who believe in Mary’s Divine Motherhood — To you we provide the necessary insights needed to be able to answer the questions of those who doubt, particularly our non-catholic brethren.

Many of our non-Catholic brethren question the dogma of the Divine Motherhood of Mary by inadvertently reechoing the Nestorian heresy which was condemned by the Council of Ephesus in 431. Nestorius claimed that in Christ Incarnate, there are two distinct persons — one divine and the other human. With this premise, Nestorius concluded that Mary was mother only of the human person of Jesus. Thus, according to Nestorius, Mary cannot be considered “Mother of God”.

The Council, attended by around 150 bishops and presided over by Saint Cyril of Alexandria, condemned the teachings of Nestorius. Specifically, the council argued in clear terms that in Jesus is one person (the Second Person of the Blessed Trinity) with two natures (Divine and Human). The union of the two natures of Christ is called hypostatic union since one cannot be without the other.

Because of the hypostatic union, the inseparable union between the two natures of Jesus, Mary is rightfully the Mother of God. She is the Mother of Jesus, the Second Person of the Blessed Trinity.

The Catholic Church teaches what she received from the Lord through the Apostles, that Mary the mother of Jesus was a virgin before and after giving birth to Jesus. Furthermore, that Mary was ‘full of grace’ from the moment of her conception and that every grace received by Christians passes somehow through her hands.

Is Mary Above God?

Some say that Mary cannot be the Mother of God because it is inconceivable for a mortal human like Mary to be “aboveâ€ God. How can the Creator “come from” Mary, a mortal? Motherhood, somehow, gives a certain degree or perception of superiority on the part of the mother over her child, for the reason that the child has to rely on the mother for its conception. Therefore, how can Jesus “rely” on Mary for His conception and birth?

The answer, I think, lies in the word “Immanuel”. Jesus wanted to be truly “one with us” and the only way for Him to do that was to become human himself by being born of a Mother. In other words, the Divine Motherhood of Mary was an essential element of God’s plan to come into the world and restore the intimate relationship between God and Man, by becoming human through the Person of Jesus.

Mary’s Motherhood does not mean that Mary is “superior” to Jesus. Because Jesus is both God and Man (hypostatic union of the two natures), Jesus still retained His Divinity, and therefore superiority over Mary, even if He had to rely on a human vessel in Mary to come into the world.

The Way of Mary

Jesus could have chosen other ways of coming into the world. He could have come in all His glory, bearing with all His Divine Power and coming down from the clouds. But the fact is that He chose to go through Mary, and to be born into the world as a helpless little infant in the arms of Our Lady. He chose to have a Mother. He chose to give His all to Mary: to rely on her for His safety, for His food and nourishment, for His upbringing and growth.

And perhaps herein lies the best answer to the question on whether Mary is truly Mother of God. Mary is Mother of God because God wanted it to be so! Dare we question this Divine decision?

Mother of God, Mother of All Christians

In the same way as the woman who bore you is called your mother and not the mother of your body only, Mary is the mother of the whole person of Jesus Christ, who is God (cf. Colossians 2:9). The Church proclaimed this truth in the Council of Ephesus in 431 A.D. – – –

Therefore, because the holy virgin bore in the flesh God who was united hypostatically with the flesh, for that reason we call her mother of God, not as though the nature of the Word had the beginning of its existence from the flesh (for “the Word was in the beginning and the Word was God and the Word was with God”, and he made the ages and is coeternal with the Father and craftsman of all things), but because, as we have said, he united to himself hypostatically the human and underwent a birth according to the flesh from her womb. – (Third letter of Cyril to Nestorius)

1 thought on “Mary The Mother of Jesus”