Music Video ofÂ  Christmas Don’t Be Late byÂ  Alvin & the Chipmunks is given above.

Alvin and the Chipmunks is an animated music group created by Ross Bagdasarian, Sr. in 1958. The group consists of three singing animated chipmunks: Alvin, the mischievous troublemaker, who quickly became the star of the group; Simon, the tall, bespectacled intellectual; and Theodore, the chubby, impressionable sweetheart.

The trio is managed by their human father and confidant, David Seville. In reality, David Seville was Bagdasarian’s stage name, and the Chipmunks themselves are named after the executives of their original record label, Liberty Records: Alvin Bennett (the president), Simon Waronker (the founder and owner), and Theodore Keep (the chief engineer).

The Chipmunks first officially appeared on the scene in a novelty record released in late fall 1958 by Bagdasarian. The song, originally listed on the record label (Liberty F-55168) as “The Chipmunk Song (Christmas Don’t Be Late),” featured the singing skills of the chipmunk trio. One phrase in the chorus has Alvin wishing for a hula hoop, which was that year’s hot new toy. The novelty record was highly successful, selling more than 4 million copies in seven weeks, and it launched the careers of its chipmunk stars.

It spent four weeks at Number 1 on the Billboard Hot 100 chart from December 22, 1958 to January 12, 1959. It also earned three Grammy Awards and a nomination for Record of the Year. At the height of its popularity, Bagdasarian and 3 chipmunk hand-puppets appeared on The Ed Sullivan Show, lip-synching the song. “The Chipmunk Song” appeared on the Chipmunks’ debut album, Let’s All Sing with the Chipmunks, in 1959, and was repeated on Christmas with the Chipmunks, released in 1962. The song also has been included on several compilation albums.

Christmas, Christmas time is near
Time for toys and time for cheer
We’ve been good, but we can’t last
Hurry Christmas, hurry fast
Want a plane that loops the loop
Me, I want a hula hoop
We can hardly stand the wait
Please Christmas, don’t be late. 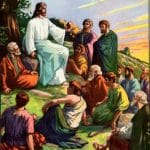 Poem : Jesus at the Sermon on the Mount

1 thought on “Video : Christmas Don’t Be Late – Alvin & The Chipmunks”