It was an unforgettable moment when, on September 15, 1987, Tony Melendez played his guitar for Pope John Paul II in Los Angeles. Born without arms, he performed a touching song entitled ‘Never Be The Same’. When the Pope approached him from the stage to kiss him in appreciation, it seemed to reflect the sentiments of the entire country. 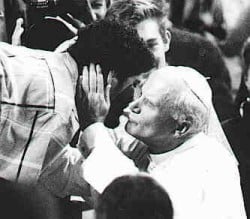 Never Be the Same was an appropriate song, for those few moments changed Tony Melendez’ life and brought his unrestrained abilities as a guitarist into national attention. It seems to be a fitting place for a man who has spent his life putting personal confidence above his handicap.

A “thalidomide baby,” Tony was born without arms because his mother was prescribed thalidomide a drug used to help calm morning sickness during her pregnancy. He was brought to the Los Angeles area from Nicaragua to be fitted with artificial arms. He wore them until he was ten, when he disposed of them. “I didn’t feel comfortable,” he explains, “I could use my feet so much more.”

His proficiency with his feet extended to more areas than just day-to-day care. He remembers that “at first, I started playing push-button organ. Then in high school I began playing around with the guitar and harmonica.” He also began writing his own songs. Whether it was “playing around” with music or merely adjusting to a normal high school routine, Tony never let his handicap get in his way. “I was pretty secure in what I could do,” he says.

It was also in high school that he became deeply involved in the Catholic Church. “I went when I was a kid because my parents took me. I drifted away as I got a little older. When I was in high school, my brother kept saying ‘come on, you’ve gotta go. It’s great!’ So I went again and made a lot of friends, and wound up changing my life in the process.

During this time, he considered becoming a priest but couldn’t, because priests were required to have an index finger and thumb. The news disappointed him but he persevered in his church activities, using his talents as a guitarist and composer for masses and church related events. Demand for him increased to the point where he was directing and singing in music groups at up to five masses on a given Sunday. It caught people’s attention, including someone with the group organizing activities for the monumental visit of Pope John Paul II in 1987.

“Someone pulled my name out of somewhere and asked me to go to a meeting,” Tony recalls. “I wasn’t sure what it was.” It turned out to be an audition and Tony was accepted. “I was really excited when I heard.”

Excitement became nervousness and then jubilation when the Pope responded to Tony’s playing, with a kiss. He notes now that he wasn’t sure how to react. “I was told not to move or the security might take me out, so I was very surprised when the Pope leaped off the four-foot stage to greet me.”

Since then Tony has traveled across the United States and forty foreign countries, making countless television appearances, including The Today Show, Good Morning America, Geraldo, CBS This Morning, The Late Show with Arsenio Hall, 700 Club, Robert Schuller, and prime-time network specials for Variety Clubs and Very Special Arts. He also performed at The World Series, where he sang the National Anthem for the fifth game of the 1989 series. Tony has had the opportunity to give four additional performances for the Pope, twice in the Vatican and the another in the Pope’s homeland of Poland, and in Denver Colorado for World Youth Day 1993. Along with television and major personal appearances, newspapers and magazines articles have appear on him through out the world. Now an author his best-selling autobiography, A Gift of Hope, was published in 1989 by Harper & Row.

He has been the recipient of numerous awards and honors, including special commendations from President Reagan, The State of California, Variety Clubs of America, Very Special Arts, The City of Los Angeles, and countless other civic and charitable organizations. He has also received the first annual Inspirational Hero Award from the NFL Alumni Association at Super Bowl XXIII in Miami.

A highly talented composer and musician, Tony recorded his first album in 1989, a collection of contemporary Christian songs entitled, Never Be the Same, which resulted in nominations for Best New Artist of the Year from Cashbox Magazine and the Gospel Music Association. His debut Spanish LP, El Muro Se Cayo And The Walls Came Tumblin’ Down, was released to critical acclaim by Latin radio stations across the country. Ways of the Wise, Tony’s second Christian album, includes the musical talents of Gary Chapman and Phil Keaggy. The fall of 1990 CCM (Contemporary Christian Music) Magazine Top Pop List charted Ways of the Wise, Tony’s first single released from the album, at #3.

Tony’s latest album Hands In Heaven (Toe Jam Music), which he co-produced, is a musical look into the heart and soul. Selections such as “Lowly Servant,” is a prayer for help and guidance in the struggles of life. “Everybody Sing,” is an uplifting Calypso praise and worship song. “Love Is the Answer,” is a remake of the 1970’s England Dan & John Ford Coley hit. “I Wish I Could Hold You; ” Tony’s touching dedication to his wife Lynn and kids. The title song, “Hands In Heaven,” is a beautiful tribute to those friends and relatives who have passed on and are now praying for us before the throne of God in Heaven – all reflect the perceptive and deeply-rooted insights into the life and faith of Tony Melendez.

Currently, Tony resides in Branson Missouri, which is most known for its small-town hospitality and world class entertainment. “Lynn and I love each other deeply and music brought us together. So, one day we’ll share all of these memories with our children. Music has opened the door to my dreams and I will keep singing, continue to share my life, and keep making’ music for all who will listen.”

Also watch Nick Vujicic in another most inspirational video

This entry is filed under Videos. You can follow any responses to this entry through the RSS 2.0 feed. You can leave a response, or trackback from your own site.
5 Responses to “Tony Melendez – Inspirational Video With Pope”
1

A friend of mine just emailed me one of your articles from a while back. I read that one a few more. Really enjoy your blog. Thanks

the gift of hope inspired me
i am a writer and poet
his songs and smile bought tears to my eyes
so i wrote his story in a poem for the world to read my 107 poem but no body knows me becoz i am poor and have no push to push my poems
my mob – 00968 98019597, 95370467
GOD NEEDS ME AS I WRITE FOR THE LORD
I USED TO WRITE ALL KINDS OF STORIES BUT NOW ONLY FOR THE LORD OH GOD PLZ HELP ME GIVE ME MY WORTH LORD.SAM

This is very inspirational, God has given everyone a gift which differ from person to person. Thanks Tony Melendez

I times we forget about our miracles and gifts that God gives, thank you for sharing your gift with us. You are right we can, thank you for reminding me. Gracias, May God bless you and your family.