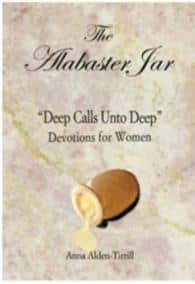 A Book of Devotions for Women

The Alabaster Jar: Deep Calls Unto Deep is a book of one-page devotions compiled by Anna Alden-Tirrill to help women more fully experience an overcoming, abundant and joy-filled life. Unlike other devotional books, Anna chose to consider only the words of women in the writing of this book. She believes that women can best understand the feelings and life challenges of other women. With this in mind, she selected the wise words of many prominent women of faith throughout the centuries up to the present day, with the hope that these words would encourage women in our modern times.

The Unique Ministry of Women

Women have always played a unique role in ministering to, about and in the name of Jesus. Twice in the gospels, we read of how two women (who may have been the same woman), one unnamed and the other named Mary, approached Jesus with expensive spikenard (perfume) oil, anointing His head and pouring it on His feet. In one instance, the woman anointed His head for His eventual burial. The other time, a woman named Mary poured her oil on His feet, and dried them with her hair.

Judas Iscariot and the other disciples complained that what these women had done was a total waste of money, and that the valuable spikenard oil should have been sold and the proceeds given to the “poor.” Each time, Jesus told the disciples to leave the woman alone, explaining that she was preparing Him for burial and what she had done would be told wherever the gospel is preached. These two acts showed the true faith and devotion of these two women who were following Jesus, while the male disciples were not quite ready to believe everything Jesus was telling them (Matthew 26:8-13, Mark 14:4-7, John 12:4-8).

In each instance, the Alabaster Jar represented self-sacrifice, devotion and the faith to believe everything Jesus was teaching. The women knew what was going to happen to Him in a few days, and they did what they could do to minister to Him. Since that time, the Alabaster Jar has become a symbol of faith for all women seeking to follow Jesus–who desire to pour out their hearts and lives in gratitude and devotion to Him.

There are times in each of our spiritual journeys when we can benefit from the wisdom of othersâ€”whether for encouragement, enlightenment, exhortation, or by example. Who better to look to but other womenâ€”those who have gone before us and those who are now among usâ€”who have walked faithfully with the Lord?

Now, through their own words, they are able to walk alongside of us and share their hearts and Godâ€™s wisdom. As â€œdeep calls unto deepâ€ (Psalm 42:7), their level of intimacy with the Lord as expressed in their words can be an example to us today. Clearly, Godâ€™s truths are universal and timeless.

This book is a collection of quotes from women of faith throughout the centuries up to the present day. It was written to help the women of today deal with the stresses and challenges of our modern world. The milestones along the pathway of womenâ€™s spiritual journeys both then and now have not changed. It is hoped that the legacy and the words of these sisters in the faith will affirm, encourage, edify, and inspire the reader in her own spiritual journey. 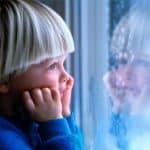 Story : Are you God’s wife? 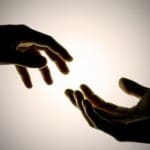 God Who Reaches Out 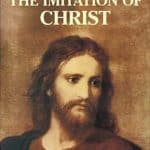 Book : The Imitation of Christ by Thomas a Kempis 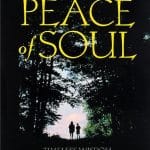