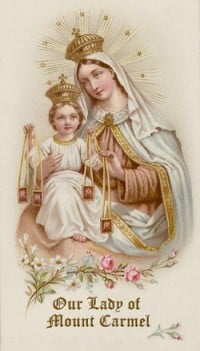 O beautiful Flower of Carmel, most fruitful vine,
Splendor of Heaven, holy and singular,
who brought forth the Son of God,
still ever remaining a Pure Virgin,
assist me in this necessity.
O Star of the sea, help and protect me!
Show me that Thou art my Mother.

O Mary, conceived without sin,
pray for us who have recourse to Thee! 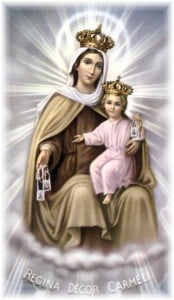 This article is in honor of ‘Our Lady of Mount Carmel’ whose feast we celebrate on 16th July.

Ever wondered why Catholics wear the scapular so devoutly & perseveringly (even on hot summer days when the wool of the scapular can be irritating to skin). Some might say, “It is a tradition” ; Others who are more theologically  sound might say, “It was given to us by the Mother of God as a pledge of protection & badge of salvation”.

One day, Elijah went to King Ahab and warned him “there will be no rain or dew here until I call for it.” And he walked away and disappeared. True enough, for three years there was no rain – the Israelites were being punished for their idolatry. Elijah’s mission according to John Haffert’s “Her Glorious Title” was to banish idolatry and show to the Israelites that Yahweh is indeed the true and omnipotent God. Elijah told King Ahab to gather the people of Israel on Mount Carmel. There he proposed a contest between him alone and the 450 pagan priests. They would erect an altar and place a sacrifice – a bullock cut into pieces – upon it and pray to their respective gods to send fire from heaven to consume the sacrifice. Whoever would answer with fire to consume the sacrifice -the gods of the pagans (Baa1 or Asherah) or Yahweh of Elijah-was truly true God.

Readers of the Bible of course know that Elijah won in this dramatic confrontation. Despite hours of praying, the priests of Baal were not rewarded with fire while after only a single earnest prayer from Elijah, Yahweh answered with a blistering fire. Thus, the people of Israel fell on their knees crying “Yahweh is God.”

The little cloud rising from the sea came in the form of a human foot. It increased in size & then rained heavily. Sea water is unfit to drink. It is impure so to speak. Rain water is the purest form of water imaginable. The foot represented the foot of MARY. “I will put enmities between thee and the woman, and thy seed and her seed: she shall crush thy head, and thou shalt lie in wait for her heel.” Gen 3:15 Douay Rheims bible

Mary came from corrupt human race, but she herself was without the stain of original sin. The ‘IMMACULATE CONCEPTION’ as she addressed herself to Bernadette of Lourdes, although a daughter of Eve she was not like Eve in her sinfulness.

The followers of Elijah in the New Testament were St. John the Baptist, St. John the Evangelist (Beloved Disciple).  Both of them devoted to Our Lady as we all know St. John the Baptist became a hermit like Prophet Elijah. He wore animal skin of brown color (prefigure of the Scapular). The Beloved disciple on the other hand lived in hermitage in his final days & was responsible for the Book of Revelation in the Bible.

“WHOSOEVER DIES IN THIS SCAPULAR SHALL NOT SUFFER ETERNAL FIRE” – OUR LADY TO ST.SIMON STOCK

This promise does not mean that even if we keep on sinning we will go to heaven just by wearing a scapular. It means that if we wear it with love Our Lady will obtain for us the grace of final contrition. We will die as friends of God & so shall be worthy of  Eternal life. Cursed are those who take the scapular for granted & keep on sinning deliberately  expecting Our Lady to save them.

In her final apparition in Fatima Our Lady appeared as Our Lady of Mount Carmel holding to the World the Brown scapular.  Sr. Lucy of Fatima said, “Our Lady held the Scapular in Her hands because She wants us all to wear it.”