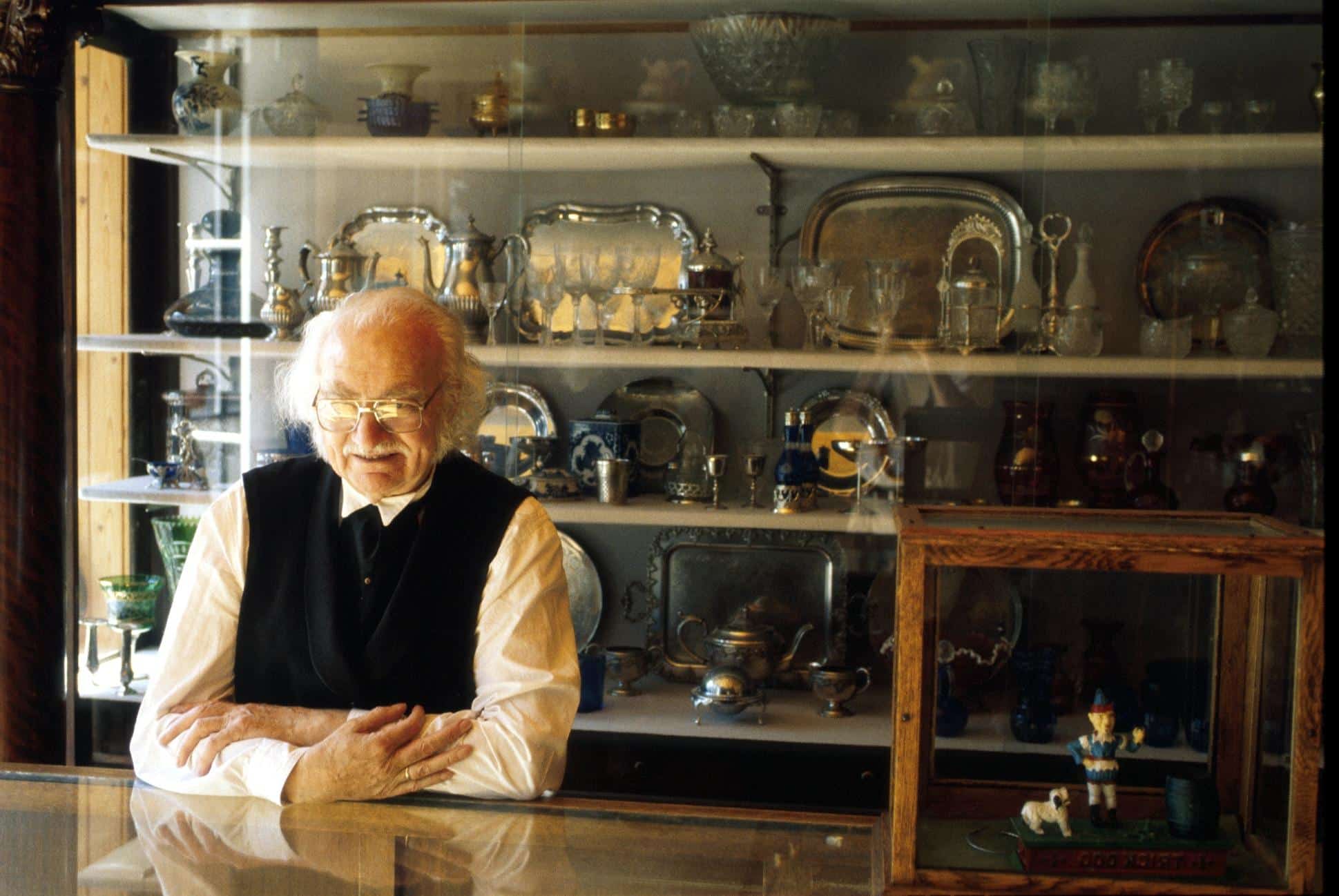 Pappy was a pleasant-looking old fellow. He had the whitest hair which he kept neatly cut and combed. His eyes were blue, though faded with age, and they seemed to emit a warmth from within. His face was quite drawn, but when he smiled, even his wrinkles seemed to soften and smile with him. He had a talent for whistling and did so happily each day as he dusted and swept his pawnshop; even so, he had a secret sadness, but everyone who knew him respected and adored him.

Most of Pappy’s customers returned for their goods, and he did not do much business, but he did not mind. To him, the shop was not a livelihood as much as a welcome pastime.

There was a room in the back of his shop where he spent time tinkering with a menagerie of his own precious items. He referred to this back room as “memory hall.” In it were pocket watches, clocks, and electric trains. There were miniature steam engines and antique toys made of wood, tin, or cast iron, and there were various other obsolete trinkets as well.

Spending time in memory hall delighted him as he recalled many treasured moments from his past. He handled each item with care, and sometimes he would close his eyes and pause to relive a sweet, simple childhood memory.

One day, Pappy was working to his heart’s content reassembling an old railroad lantern. As he worked, he whistled the melody of a railroad tune and reminisced about his own past as a switchman. It was a typical day at the shop. Outside, the sun illuminated the clear sky, and a slight wind passed through the door. Whenever the weather was this nice, Pappy kept the inner door open. He enjoyed the fresh air-almost as much as the distinctive smell of antiques and old engine oil.

As he was polishing his newly restored lantern, he heard the tinkling of his bell on the shop door. The bell, which produced a uniquely charming resound, had been in Pappy’s family for over a hundred years. He cherished it dearly and enjoyed sharing its song with all who came to his shop. Although the bell hung on the inside of the main door, Pappy had strung a wire to the screen door so that it would ring whether the inner door was open or not. Prompted by the bell, he left memory hall to greet his customer.

At first, he did not see her. Her shiny, soft curls barely topped the counter.

“And how can I help you, little lady?” Pappy’s voice was jovial.

“Hello, sir.” The little girl spoke almost in a whisper. She was dainty. Bashful. Innocent. She looked at Pappy with her big brown eyes, then slowly scanned the room in search of something special. Shyly she told him, “I’d like to buy a present, sir.”

“My grandpa. It’s for my grandpa. But I don’t know what to get.”

Pappy began to make suggestions. “How about a pocket watch? It’s in good condition. I fixed it myself,” he said proudly.

The little girl didn’t answer. She had walked to the doorway and put her small hand on the door. She wiggled the door gently to ring the bell. Pappy’s face seemed to glow as he saw her smiling with excitement.

Just then, Pappy’s expression changed. Fearful of breaking the little girl’s heart, he told her, “I’m sorry, missy. That’s not for sale. Maybe your grandpa would like this little radio.” The little girl looked at the radio, lowered her head, and sadly sighed, “No, I don’t think so.”

In an effort to help her understand, Pappy told her the story of how the bell had been in his family for so many years, and that was why he didn’t want to sell it.

The little girl looked up at him, and with a giant tear in her eye, sweetly said, “I guess I understand. Thank you, anyway.”

Suddenly, Pappy thought of how the rest of the family was all gone now, except for his estranged daughter whom he had not seen in nearly a decade.

Why not, he thought. Why not pass it on to someone who will share it with a loved one? God only knows where it will end up anyway.

“Wait…little lady.” Pappy spoke just as the little girl was going out the door–just as he was hearing his bell ring for the last time. “I’ve decided to sell the bell. Here’s a hanky. Blow your nose.”

The little girl began to clap her hands. “Oh, thank you, sir. Grandpa will be so happy.”

“Okay, little lady. Okay.” Pappy felt good about helping the child; he knew, however, he would miss the bell. “You must promise to take good care of the bell for your grandpa–and for me, too, okay?” He carefully placed the bell in a brown paper bag.

“Oh, I promise,” said the little girl. Then, she suddenly became very still and quiet. There was something she had forgotten to ask. She looked up at Pappy with great concern, and again almost in a whisper, asked, “How much will it cost?”

“Well, let’s see. How much have you got to spend?” Pappy asked with a grin.

The child pulled a small coin purse from her pocket then reached up and emptied two dollars and forty-seven cents onto the counter.

After briefly questioning his own sanity, Pappy said, “Little lady, this is your lucky day. That bell costs exactly two dollars and forty-seven cents.”

Later that evening as Pappy prepared to close up shop, he found himself thinking about his bell. Already he had decided not to put up another one. He thought about the child and wondered if her grandpa like his gift. Surely he would cherish anything from such a precious grandchild.

At that moment, just as he was going to turn off the light in memory hall, Pappy thought he heard his bell. Again, he questioned his sanity; he turned toward the door, and there stood the little girl. She was ringing the bell and smiling sweetly.

Pappy was puzzled as he strolled toward the small child. “What’s this, little lady? Have you changed your mind?”

Before Pappy had time to say another word, the child’s mother stepped into the doorway, and choking back a tear, she gently said, “Hello, Dad.”

The little girl tugged on her grandpa’s shirttail. “Here, Grandpa. Here’s your hanky. Blow your nose.”

This entry is filed under Stories. You can follow any responses to this entry through the RSS 2.0 feed. You can leave a response, or trackback from your own site.
3 Responses to “Story : Pappy, The old shopkeeper”
1

Thank you for sharing this tale. It speaks to an almost universal experience—estrangement from a loved one. The joy of being reunited is nearly inexpressible. Your story highlights the significance of the people in our lives and the exceeding value of relationship over possesions.

It is a great story, it is very touching. It is an inspiration to every grandfathers and all that has lost their loved ones.

Like this story, this site, has a wide selection of religious items and Inspirational Gifts that you can give a certain person for inspiration.