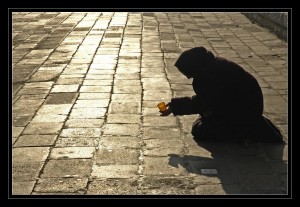 The parking lot filled rapidly on Sunday morning as members of the large church congregation filed into church. As usually happens in a church that size, each member had developed a certain comfort zone – a block of space within those four church walls that became theirs after the second or third sitting.

It was as much a part of their church experience as the recliner was to the television at home. Some of the older members had been sitting in the same row on the same side for several decades. A team of oxen could not have moved them to the opposite side of the church.

One morning a stranger stood at the edge of the parking lot near a dumpster. As families parked cars and piled out, they noticed him rummaging through the trash. “Oh no! I don’t believe it,” whispered a lady to her husband. “That’s all we need — a bunch of homeless people milling around here.”

One worried little girl tugged on her dad’s sleeve. “But Daddy…”

Daddy was busy sizing up the bearded stranger, whose baggy, outdated trousers and faded flannel shirt had dusted too many park benches.

“Don’t stare at him, honey,” he whispered, and hurried her inside.

Sunlight suddenly flooded the center aisle. The double doors swung open and the homeless man, sloppy and stooped, headed toward the front.

“Oh no, it’s him!” somebody muttered.

“What does he think he’s doing, anyway?” snapped an incredulous usher.

The stranger set his bagful of dumpster treasures on the very first pew which had been upholstered in an expensive soft teal fabric just three months ago. The music stopped. And before anyone had a chance to react, he ambled up the stairs and stood behind the fine, handcrafted oak podium, where he faced a wide-eyed congregation.

The disheveled stranger spoke haltingly at first, in a low, clear voice. Unbuttoning and removing his top layer of clothing, he described Jesus, and the love He has for all people.

“Jesus possesses a sensitivity and love that far surpasses what any of us deserves.”

Stepping out of the baggy old trousers, the stranger went on to describe a forgiveness that is available to each and every one of us…without strings attached.

“In Jesus, there is always hope.”

“You see, my friends, it is never too late to change,” the man continued.

“He is the Author of change, and the Provider of forgiveness. He came to bring new meaning to ‘life’.”

Men and women squirmed as reality hit them like an electrical current. The stranger tugged at his knotted gray beard, and removed it.

“I’m here to tell you that we are loved with a love far beyond human understanding, a love that enables us to accept and love others in return.” Then tenderly he added, “Let’s pray together.”

That wise pastor – under the guise of a homeless “nobody” – did not preach a sermon that day, but every person left with plenty to think about.

This entry is filed under Stories. You can follow any responses to this entry through the RSS 2.0 feed. You can leave a response, or trackback from your own site.
One Response to “Story : A homeless “nobody” in church”
1

This is like the Homeless person that wondered in my church and all but me & my spouse moved away.
Ironically the Pastor was preaching on Jesus touching the Leper and being sensitive to needy & hurting people. This is why some people looking for Jesus in the church don’t go anymore. Jesus is not in some churches. If he walked into some of these iceberg dry churches I doubt if many people would recognize him, just like the religious Pharisee’s failed to recognize him. Somethings don’t change even after thousands of years!

Your Thoughts Are Welcome | Leave a Reply
Prev/Next Posts
« Story : What makes you think there is anyone better than you? | Home | Story : “It is more blessed to give…..” »
Subscribe For Free
Pages
Top Devotional Songs
Today's Top 10
Play Songs Online
Categories
Most Popular Articles
Most Discussed Posts