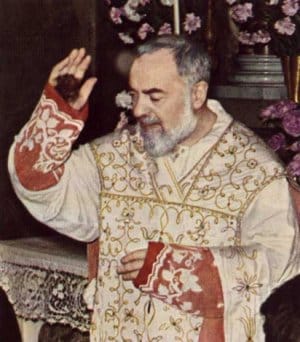 What is stigmata? Is stigmata real or fake? Read on to know all about stigmata.

Stigmata are bodily marks, sores, or sensations of pain in locations corresponding to the crucifixion wounds of Jesus, such as the hands & feet. Saint Paul says in his letter to Galatians, “I bear on my body the marks of Jesus.” Stigma means a mark or brand mainly used for identification. An individual bearing stigmata is referred to as a stigmatic.

Stigmata are wounds or skin markings that match the wounds suffered by Jesus during his trial and crucifixion. They are often regarded as a supernatural sign from God. Jesus Christ supposedly bore five wounds after his crucifixion. Padre Pio , St Gemma Galgani , St Catherine of Siena and St Francis of Assisi received the same marks miraculously.

Visible stigmata are frequently located in both hands and both feet, and on the right side of the chest, replicating the sites of Christ’s wounds, which he showed to the disciples in his post-resurrection appearances (Luke 24: 36-40 and John 20: 19-29). The most famous of the stigmatics, St Francis of Assisi, received the stigmata in these places. Occasionally wounds on the head, in the shape of a crown (copying the crown of thorns), and marks on either shoulder (representing the carrying of the cross and scourging) are evidence of stigmata too.

Stigmata might also be invisible, marked by the pain of wounds in the classic places, or alternately invisible and visible. St Catherine of Sienna received the stigmata of the five wounds in a vision but asked God to make them disappear, after which she experienced only the pain of the wounds.

The appearance of stigmata varies greatly. Stigmata have ranged from the nail imprints of St Francis’ wounds to cuts of varying length and depth, blisters, and scabs of dried blood. Since they match the wounds suffered by Jesus, they are normally found on the hands and ankles, on one side of the chest, and on the head, shoulders, and back. But they aren’t always real wounds, because many of them occur in the form of purplish skin blotches or tattoo-like markings. Actually, in some cases what looks like a blotch may be a real wound, because small amounts of blood will sometimes seep from it, even though no breaks are visible in the skin.

Many show some or all of the five Holy Wounds that were, according to the Bible, inflicted on Jesus during his crucifixion: wounds in the hands and feet, from nails, and in the side, from a lance. Some stigmatics display wounds to the forehead similar to those caused by the Crown of Thorns. Other reported forms include tears of blood or sweating blood, and wounds to the back as from scourging.

In several cases, stigmata have appeared on Good Friday and vanished on Easter morning. Some occurrences of stigmata persist for many years, but others only last a few days.

The word “stigmata” is the plural of the Greek word “stigma”. This was an ancient name for marks that were pricked or branded onto the bodies of slaves and soldiers for identification purposes. The first known use of the word with regard to the wounds of Christ occurs in Galatians 6:17, where the Apostle Paul says “I bear on my body the marks of Jesus.” It was said that Saint Francis of Assisi’s stigmata became present two years before his death, and that his hands actually appeared to have nails in them.

The best-known stigmatics of modern times include Padre Pio, Therese Neumann, Heather Woods, and Lilian Bernas, but there have been many others. In some modern cases, people have reported that they went into a trance in which they seemed to be nailed to a cross, and when they awoke they found the wounds or markings on their bodies.

The sudden appearance of stigmata is a divine sign that a person is very close to God. The miraculous nature of the wounds is verified by the fact that they don’t respond to medical treatment, but can suddenly heal without treatment and without leaving any scars.

Stigmata are sometimes accompanied by other unusual phenomena such as powers of prophecy and the ability to live with very little food or water. Saint Catherine of Siena (1347-1381) reportedly went without water for an entire month while her wounds were present. And Angela of Foligno (1250-1309) didn’t eat anything for twelve years except for what was offered at the Eucharist. Other associated phenomena include visions, trance-like states, and tears of blood.

Stigmatics say that they gladly suffer from the pain because their sacrifice helps pay for the sins of other people.

This entry is filed under Think N Grow. You can follow any responses to this entry through the RSS 2.0 feed. You can leave a response, or trackback from your own site.
4 Responses to “Stigmata : Real or Fake?”
1

There can be no doubt that Stigmata are real. But I doubt Paul was talking about Stigmata in Galatians 6:17. The context of the Galatians discussion of is keeping the Torah and bearing the mark of brit milah, the circumcision. Paul argued although he had the circumcision mark, but the mark that counts is Jesus’ new creation.

Since we are healed by His stripes, I wonder what Stigmata ought to represent. Is it God tapping us on the shoulder, so to speak? Or something about fervent belief?

A decade ago I was working a high-end residential construction project. Weeks into the project I began to develop a singular lump under the arch of each foot. It became so painful I went to see a doctor after friends convinced me I somehow developed (2) large planter’s warts simultaneoulsy. The doctor was baffled – he confirmed they weren’t planter’s warts. He cut away the dead skin and exposed 1/4″ inch holes – red, raw.

I walked on my heels. Within a day or so after that visit – two “like lesions” developed in the palm of each of my hands.

The lesions on my feet re-appear (though much smaller) every 18 months or so.

In conjunction with this phenomenon; I started having a recurring dream: it was a funeral – a solitary stained glass window adorned the alter area – the casket beneath it. There was a woman vocalist who was singing when light came through the window and shoneon the woman singing – like a spot light. It followed her movement; the color changing fromt he stained glass.

Years later; I was in a large Sunday school class of middle-aged adults in northern VA. One of the participants described my dream – she had attended a funeral of a fellow congregant and “colored” light shone on the singer – following her as she moved. The singer became aware of the light and moved – the light followed.

What is happening? Are stigmatics often “protected” from “super-difficult”
challenges?

I always been scared of things that cant be explan
I read alot of docomentry , as alittle girl Id have
Experience movements, echcos, or something runnin pass my eye from the corner. I think id would have a strok if id wiukd see something id couldnt handle ..But I reply to this topuc causr im
Enterested, I do go to church and Have beleive that were not alone of a second. I know right from wrong, I exoereince that Id get into a deep
Anger and event evil misterious horrable thoughts. But Im in control, then I see myself diin those acts… I grew up loven nuns, and wanted to be as one. Sometimes wonder what id be as of today…Pleasr do not make me out crazy, but know this Im human as you.

Paul was beaten, stoned, thrown off a cliff, persecuted for preaching the gospel. He is saying he has the marks of Christ much as slaves had a mark showing who they belonged to. In other words he has the scars to prove he was a follower of Christ. He wasnt talking stigmata. And no matter how close one is to God noone can pay for anybody elses sins. No one can save another person. We are saved ONLY by the blood of Jesus (His atonement alone). The problem with signs and wonders is it distracts from Gods Word and does not bring us closer to God but toward paganism. Ask God for wisdom and He shall give it to you, dont ask for signs and wonders. Read the bible and the truth shall set you free. Yes the devil does use signs to deceive you…stigmata being one of them.