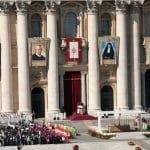 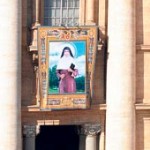 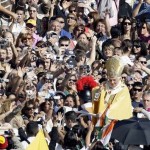 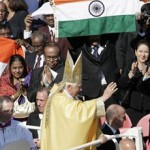 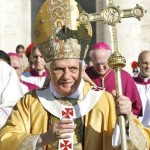 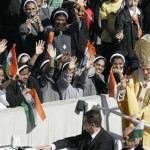 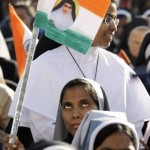 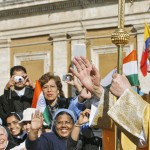 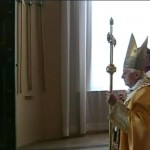 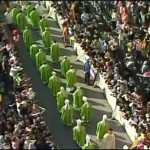 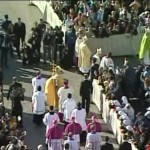 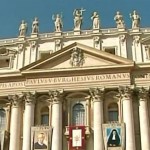 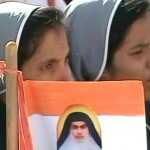 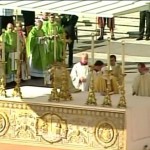 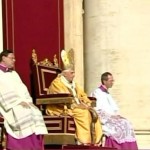 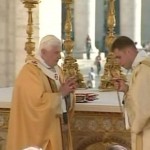 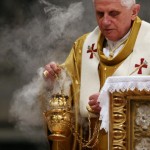 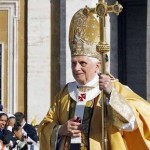 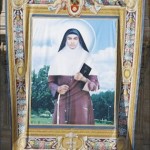 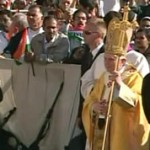 Pope Benedict XVI gave India her first woman saint yesterday at St. Peters Square, Rome and appealed for an end to the anti-Christian violence in some parts of the country. (See the St. Alphonsa Canonization Pics given above)

The canonisation of Sister Alphonsa, a Franciscan Clarist nun from Kerala who died 62 years ago aged 36, is seen as a morale boost for India’s 2 per cent minority Christians, under attack in Orissa and Karnataka.

Violence continued in Orissa’s Kandhamal even on the day of canonisation, but Indian Christians drew strength from Alphonsa’s sainthood, even speaking of forgiving their attackers. “At a time evil is so widespread, it is good to have something like this to keep our spirits up,” said Sister Grace Kalariparampil, 77, who knew Alphonsa, in Bharananganam town where the saint lived and worked.

After the ceremony in St Peter’s Square, Rome, Benedict had a message in English for the 5,000 Indians in the crowd of tens of thousands: “As the Christian faithful of India give thanks to God for their first native daughter to be presented for public veneration, I wish to assure them of my prayers during this difficult time.” He added: “I urge the perpetrators of violence to renounce these acts and join with their brothers and sisters to work together in building a civilisation of love.”

Benedict later met the Indian delegates, who included Union and state ministers from Kerala. India has the largest population of Catholics in Asia after the Philippines. During Prime Minister Manmohan Singh’s visit to France, numerous Western politicians had sharply denounced the violence in Orissa and called upon New Delhi to prevent further attacks. Prime Minister responded to these by insisting that religious freedom was guaranteed in the country’s Constitution and would be defended by his government.

Reacting to the Pope’s message, Arup Jena, a Christian from Kandhamal, said: “Of course, this is the right time for the believers to show love towards the enemy during the difficult time…. Jesus had forgiven his persecutors.”

Church bells rang and firecrackers went off in Kerala, where thousands packed into a small church and school auditorium in Bharananganam to watch the canonisation ceremony on TV. Former athlete Shiny Wilson, who came with her husband and two children to pray at Alphonsa’s ancestral home in Kudamalur, attributed her career success to the nun.

“I prayed to Alphonsa to help me do well at the Asian championships in 1985. I set a record in 800m and it’s because of her. In gratitude, I donated the gold medal to her memory at the box,” Shiny said. An Indian man of Portuguese parentage, Gonsalo Garcia, was canonised in 1862 but most Indian Christians will consider Alphonsa the country’s first saint since Garcia had lived and worked in Japan.

Alphonsa’s name can now be invoked during prayers by Christians across the world and churches can be dedicated in her honour. A Delhi church has already been dedicated to her and the Centre has promised to issue a stamp in her honour. Her images can now be drawn and printed, her relics publicly honoured, Mass offered in her name and feast days celebrated in her memory.

Benedict’s predecessor, John Paul II, had beatified Alphonsa in 1986. (CLICK HERE to see the detailed PDF on Her beatification). The country’s best-known Catholic nun, Mother Teresa of Calcutta, has been beatified after the Vatican attested to one miracle by her, but she can be declared a saint only after a second miracle is confirmed.

Indians from across the world gathered at the ceremony in Rome. Among them was 10-year-old Kerala boy Jinil Joseph whose clubfoot – a birth defect – was, in the judgement of Vatican officials, miraculously healed after prayers to Alphonsa in 1999.