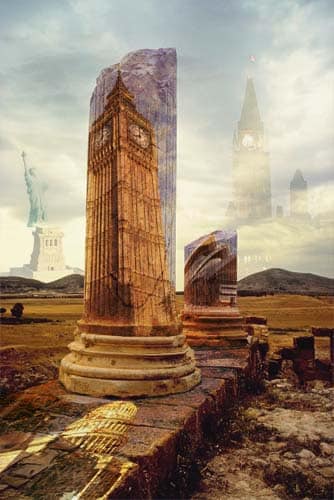 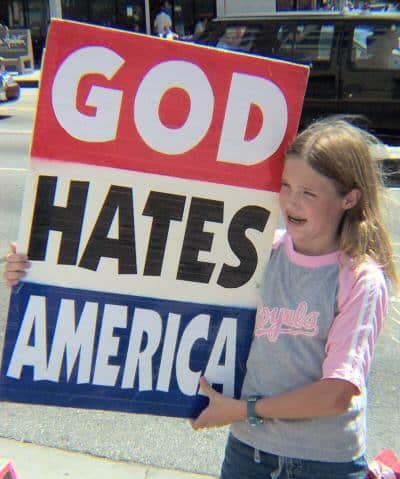 No government, kingdom or society lasts forever. Here are seven factors that contributed to ancient Rome’s demise-warning signs that exist today within the nations of the American and British peoples.

There are â€˜striking similarities’ between America’s current situation and the factors that brought down Rome, including â€˜declining moral values and political civility at home, an over-confident and over-extended military in foreign lands and fiscal irresponsibility by central government.'”

History reveals that all governments, empires and kingdoms of men, no matter how grand, no matter how powerful, ultimately fall. It happened to ancient Egypt, Assyria and Babylon. Even Rome was not exempt; though it dominated much of Europe, Northern Africa, the Middle East and parts of the Near East, and lasted for 500 years, the Roman Empire ultimately fell.

There is an old and popular saying: “Rome was not built in a day.” Likewise, the Roman Empire did not fall in one night; its decline was gradual. Not long after it rose to world dominance, several factors were already at work contributing to the empire’s ultimate demise. Similarly, these factors are at work among the societies of the American and British peoples-and serve as warning signs of a civilization destined to fall.

Few understand that the family unit is the basic building block of every thriving society. Within the family, young minds are first taught the importance of building character, controlling one’s emotions, setting worthwhile goals, striving for excellence-or at least this should be the case, as it was generations ago.

At the start of the Roman Empire, fathers took seriously their role in properly instructing, training and educating their sons, and mothers taught their daughters as well. The example of strong and active parents daily ingrained into children the importance of obedience, deference to civic authority and respect for the laws of the land.

But as new generations came of age, the family weakened and fractured. Husbands and wives gave in to the pulls of human nature to engage in widespread adultery, inevitably leading to increasing rates of broken marriages. Divorce for virtually any reason became legal; wives only had to say to their husbands three times in succession, “I divorce you!” to bring it to pass. Also, parents came to spoil their children, who then grew up to become lazy adults who were irreverent, disobedient to authority and had little respect for the elderly or the “old paths” of social norms and values.

Likewise, the family unit in America, Britain, Australia, Canada and other sister nations of the West is under constant assault. Broken marriages and fractured households are now the norm. Few fathers exercise a strong hand in teaching, guiding and correcting their young, often leaving mothers to fill both parental roles.

Children are growing up pampered and catered to, never learning to accept and recover from setbacks-never being taught to “rise up before the hoary head, and honor the face of the old man” (Lev. 19:32), which is connected to fearing God-never instructed to think of others before themselves. They live in a fantasy world in which they “must” have cellphones; they “need” their privacy; they “have rights.”

Modern parents believe they know better than their Creator, and thus ignore important biblical instruction such as, “The rod and reproof give wisdom: but a child left to himself brings his mother to shame” (Prov. 29:15) and “Correct your son, and he shall give you rest; yes, he shall give delight unto your soul” (vs. 17).

The result? A generation of children who oppress and rule over their parents and show no respect for their elders (Isa. 3:4-5, 12).

The Roman Empire began with an educational system that emphasized developing character, morality, patriotism and social values in young lives. The goal was to develop the whole person. But this was eventually replaced by an emphasis almost exclusively on academics, with no moral or ethical absolutes defining right and wrong. Similarly, character development, patriotism and civic duty are seldom taught in the public schools of the West, where God and the Bible are banished, and morally unchecked “creative expression” is encouraged.

Because the modern house of Israel rejects God’s Word, the foundation of all true knowledge, God declares, “My people are destroyed for lack of knowledge” (Hos. 4:6). He describes them as blind men groping around in spiritual darkness (Isa. 59:9-10).

The Romans were pagan idol worshippers who took the gods of the Greeks and gave them Roman names. Accompanying the assortment of false gods was lascivious religious rituals and customs. Temple prostitution, drunkenness and other vices that appealed to the flesh were common across the empire. Similar to the Greeks, the Romans worshipped mythological figures who freely gave in to carnal desires-deceiving, stealing, getting drunk and committing fornication, adultery, even rape!

Today, millions of Americans, Britons and others claim to worship only one deity, the God of the Bible-yet their actions scream something quite different!

The word worship means to “regard with great or extravagant respect, honor, or devotion.” Do the British and American peoples truly worship the God of Abraham, Isaac and Jacob? Or do their actions show they revere manmade “gods”?-celebrities who by word and example influence shallow minds to copy their irresponsible behavior. Politicians who are forgiven for reckless conduct as long they raise the banner of political correctness and “progressive” (read: permissive, radical) causes, and proudly proclaim that their personal, moral, religious or “spiritual” beliefs will never stand in the way of pleasing the masses.

Millions within America’s religious community are quick to proclaim their religious fervor. But among them are those leading hypocritical lives, speaking out against sexual immorality, yet secretly engaging in it. Among priests, preachers and other prominent religionists are child molesters, closeted homosexuals and serial adulterers.

Pagan worshippers of ancient Rome sought an endless plethora of gods-but their religious beliefs were shallow, lifeless and without true meaning. Followers were left without direction, seeking spiritual purpose but never finding it.

It is the same in modern times. The hypocrisy of religious leaders has jaded millions, and their message of a God without laws-who does not hold followers to a higher standard of conduct and thinking-a “prosperity gospel” without expectations from believers-is ultimately empty. The result is a spiritual wasteland of human ideas that may sound appealing, but are not of the Bible-and has nothing to do with the true gospel (literally “good news”) that Jesus Christ preached: the kingdom of God (Mark 1:14-15).

The Romans were masters of extreme pleasure-seeking. They entertained themselves with gladiators (rock stars of the day) and gambled on who would live or die. They enjoyed the sight of Christians, Jews and other enemies of the state being eaten alive by wild animals shipped from exotic regions. Residents were proud of their lavish villas, imported cuisine and fine attire. They thrilled themselves with plays, bathhouses, indoor pools and drunken parties held in the honor of Bacchus, the false god of wine and sensual pleasures.

Similarly, the modern descendants of the “lost” tribes of Israel entertain themselves, with mindless “reality” television programs driven by deception and gratuitous sex. With superstar athletes who proudly show off their tattoos and pride themselves on their multi-million-dollar contracts-yet are void of prudence, judgment and character.

Advertising, news media and Hollywood promotes materialism and covetousness. A society that loves to emulate wanton lifestyles portrayed in movies and pursue sports, gambling, theater, music and other distractions over seeking true values is destined to collapse-as did Rome.

Economy, Government and the Military

Originally, agriculture and land ownership were Rome’s chief sources of wealth-and became the most heavily taxed. Over time, landowners who operated large farms on the backs of slaves eventually undersold smaller farmers, forcing them out of business. In addition, importing foods from both conquered lands and more easily accessible distant foreign ports also began to take its toll. Commercial trade in Rome created a massive consumer economy that focused on services rather than production and growth-just as in modern-day America and Britain.

As the Roman Empire expanded, so did the costs of operating it. Rapidly growing government bureaucracy became expensive to maintain. For instance, it took an army of officials to man and work the increasingly complicated “red tape” filing system, which faced demands from both government services and the military.

To compensate for inflation, Roman emperors in the second and third centuries produced more coins, but these were no longer made of silver and gold alloys, which had become scarce. Roman currency dwindled in value. The citizenry strained under heavy tax burdens, as the government left no stone unturned in seeking potential revenue sources.

Taxes combined with inflation and a desire to maintain an unrealistic standard of living have driven a growing majority to live on credit and practice the materialistic principle of “live for today, forget about tomorrow.” Consumers survive paycheck to paycheck, partly due to wrong financial priorities and living beyond their means. A new car or home suddenly becomes a “necessity” based on the maximum amount of a “pre-qualified” bank loan, rather than actual needs. British, Canadian, Australian and American consumers are strapped with debt, resulting in a staggering number of defaulted home loans and personal bankruptcies.

As in ancient Rome, strong belief in self-determination and self-reliance has been replaced with an attitude of expecting something for nothing. Government-run systems originally intended to assist those in genuine need are now considered an entitlement.

Americans want to have their economic “cake and eat it too”-to work less and play more-to “support the troops,” but have their family members and friends in the military stay home-to fight terrorism, but not raise taxes to support the military (which does the actual fighting)-to obtain better health insurance, but force employers to pay for it-to receive social security when they retire, but not increase how much they pay into it now.

Of course, how can the average consumer be expected to show fiscal responsibility when government leaders fail to do so? For example, when the Pentagon pays a small parts supplier $998,798 to ship two 19-cent washers to a U.S. Army base! Or when a Korean War veteran has to buy his own Purple Heart at a military surplus store because the Navy informed him the medal was “out of stock”!

And just as the Roman army was overstretched and overextended in foreign lands, so is the American military. Roman soldiers, once known for their precision in battle and rigid obedience to authority, eventually became demoralized. The same can be said of U.S. troops, among whom suicide rates have risen since the start of the war in Iraq-60 in 2003, 67 in 2004, 88 in 2005 and 99 in 2006. Desperate not to return to Iraq, one soldier paid someone $500 to shoot him in the leg!

A Kingdom That Will Never Fall

Family, education, religion, pleasure-seeking, the economy, government and the military. The failure of these and other factors have contributed to the death of men’s governments-and are at work in the birthright nations of America and Britain.

However, there is a future government that will be established by a perfect Leader, as foretold in Isaiah 9: “For unto us a Child is born, unto us a Son is given: and the government shall be upon His shoulder: and His name shall be called Wonderful, Counselor, The mighty God, The everlasting Father, The Prince of Peace. Of the increase of His government and peace there shall be no end” (vs. 6-7).

An incorruptible King, Jesus Christ, will direct His government-the kingdom of God-to teach true family values; place educational institutions upon the right foundation; empower true religion to provide guidance and purpose to empty lives; maintain a global economy that will never see a depression-or even a recession; ensure that government on all levels will be free of bureaucracy; and convert all weapons to a greater purpose (Isa. 2:4).

And this world-ruling kingdom will never fall!

10 thoughts on “Signs of a Falling Nation : Beware America and Britain”