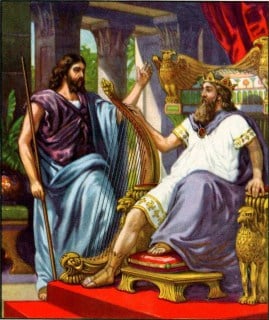 David’s greatness lies in fact that He was ready to listen to Nathan, though he was the King of Israel. The Holy Season of Lent is a time of preparation, of conversion, of penance, of purification, a turning away from evil and of deciding for God.

At the origin of human history in the garden of Eden God was one with the first parents. The Lord God walked with them in the garden. They saw him, they heard him and Adam and Eve enjoyed the company of the Lord. God was part of the nature, but once sin entered the world the rhythm of the nature was broken and there came a gulf between God and man.

Day by day mankind walked far from the good Lord. Sin blinded the humanity so much that they began to miss the appearance of the Lord. Purity of heart is indispensable for the glorious vision of the Lord. For Jesus said, â€œBlessed are the pure in heart for they shall see God.â€ So the Lord God full of love for mankind began to send prophets to let His mind to be known to His children.

Lent is a time, when we are surrounded by ‘Nathans’ and ‘Davids’ everywhere. The liturgical celebrations in this Holy season especially in the scripture reading we come across â€˜Nathanâ€™ speaking to us. Nathan is the symbol of Godâ€™s voice speaking to us in many ways. May it be our conscience, the word of God, God himself or anyone of the society that surrounds us. David is the symbol of a repentant sinner.

God sends â€˜Nathansâ€™ to our lives at every moment to bless us with right direction, and true perception. Let us travel through the Old Testament and get acquainted with Nathan and David. It is interesting to note how David was chosen from among his brothers to be the king over Israel. The Lord anointed David through the hands of Samuel and blessed his life with peace, happiness, wealth, health and prosperity.

Then came a moment of weakness, sin after sin and he alienated from the good Lord. God came down in the person of a prophet, like a good shepherd to seek out the lost. God sent Nathan to speak for him to David and to bring him back home. Nathan went in and spoke with authority but with a sense of compassion, love and tolerance (2 Samuel 12:1). Nathan dramatized the sinful act such a way that David could not but repent for the rest of his life.

Nathan said to David, â€œYou are the man. Thus says the Lord, God of Israel, I anointed you King over Israel, and I delivered you out of the hand of Saul; and I gave you your masters wives into your bosom, and gave you the house of Israel and of Judah; and if this were too little; I would add to you as much more. Why have you despised the word of the Lord and done what is evil in his sight by killing Uriah and have taken his wife to be your wife? (2 Samuel12:7-9).

King David repented for his sins, promised a total change, made reparation for the crime and brought about drastic change in his life. He made total reparation for offending the Lord and having gone away from Him. He fasted seven days neither eating nor drinking, he went in and lay all night on the ground and prayed and wept bitterly in spite of being the king over Israel. God was pleased and blessed him and his family with the gift of Solomon who is known for his wisdom. Of course sin had its wages. Since David struck down Uriah with the sword and had taken his wife, the sword never departed from his house.

God painfully noticed that David is gone far away from Him and God took the initiative to bring him back home. As in the days of King David, God sends Nathan to our lives at every moment and every day. In the words of prophet Joel He says, â€œcome back to me with all your heart, fasting, weeping; let your hearts be broken not your clothes torn; turn to the Lord your God again, for he is all tenderness and compassion, slow to anger, rich in graciousness and ready to relent.â€

Everyone is called to play both the roles of Nathan and King David, at one time or another.

Nathan was sent by God (2 SamuelÂ 12.1)
The scripture says Nathan was sent by God to David. He was sent to speak for God, to speak only Godâ€™s words and his only mission was to let Godâ€™s mind to the King. It is important for us to know if we are truly sent by God with a special mission or is it out of selfishness, jealousy or grudge that we take up the role of Prophet Nathan at times? It is interesting to note the conversation of Nathan – he speaks in first person, â€œI anointed you â€¦ I rescued you â€¦ I gave you your masterâ€™s house â€¦ I would have added much moreâ€¦ Why have you despised the word of Godâ€? He was sent by God and spoke only for God.

Nathan spoke with authority (2 SamuelÂ 12:7)
All authority is from God. It is clear from Jesusâ€™ answer to Pilate,â€ you would have no power over me unless it had been given to you from aboveâ€ (Jn.19:11). â€œYou are the manâ€ Nathan said to David. He was conscious of the mission to speak the words of God. Therefore what we speak with authority should be the words from above, in fact the words of God not personal agenda.

Nathan was person oriented not fault oriented (2 SamuelÂ 12:13)
Nathanâ€™s dialogue was blended with the expressions of love, compassion and forgiveness. He said and did nothing except what was directed by the Lord God. As soon as King David confessed his sin and expressed the sign of repentance Nathan blessed him with forgiveness for his crime. He said, â€œNow the Lord has put away your sin, you shall not dieâ€. Such are to be our blessing and attitude when we take up the role of Prophet Nathan.

King David was great in Israel but he was simple like a child.
Now we shall reflect some of his virtues:

King David repented promptly (2 Samuel 12:13)
King David repented as soon as he realized that he was wrong. He confessed saying,â€ I have sinned against the Lordâ€. David being the great King over Israel had the humility and sincerity to come down from his throne and correct himself. Today our society desperately lacking a sense of sin. Injustice, robbery, murder, rape, persecution and all kinds of evil are so much part of our lives that we seem to lose the sense of sin. Only a person with clear conscience can have a sense of sin, and accept oneâ€™s own fault.

Lent is a Holy season where the heavenly Father expresses himself to us in many ways and through many people. He comes down like a good shepherd and a prodigal father who is full of compassion, merciful love, forgiveness and grace. At times he himself goes in search of the lost sheep or sends Nathans to bring them back home.

God the Father is passionately in love with his children especially when they sin and get alienated from him. Just as the merciful father forgave King David and prodigal son he forgives each one of us provided we repent for our sins and promise our will to give up the wrong path. Our God who is all tenderness and compassion is totally different from the attitude of human beings who glance at a repentant sinner with the same old image. A person with sound inner vision can recognize and accept a person of renewed spirit.

As in the case of King David he sends Nathan to our lives continuously. Have we ever listened to Him? Do we hearken to his voice or ignore him?

The story of King David reveals the depth of Godâ€™s Love and how God longs for our coming home to the fathers love. Jesus expressed of this same unconditional love, compassion and forgiveness of our heavenly Father in the parable of the prodigal son.

Come let us pause for a while, and become aware of our position, if we begin to slip away from the track, let us follow Nathan and get back in to the ocean of love and experience once again the compassion, forgiveness and unconditional love of the Heavenly Father. 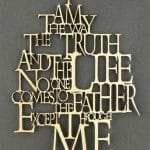 Prayer : The Way, The Truth And The Life 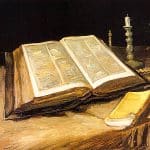 Have The Original ‘WORD’ Been Lost? 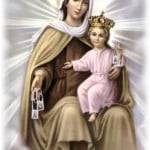 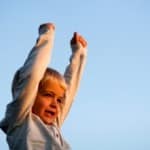 Being Confident And Humble