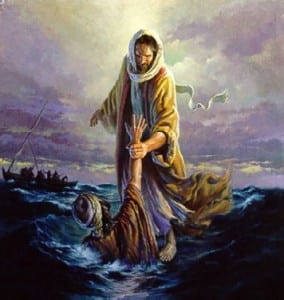 After the crowds have eaten their fill, Jesus obliged his disciples to get into the boat and go ahead of him to the other side, while He sent the crowd away. And having sent the people away, He went up the mountain by himself to pray. At nightfall, He was there alone.

Meanwhile, the boat was very far from land, dangerously rocked by the waves for the wind was against it. At daybreak, Jesus came to them walking on the lake. When they saw him walking on the sea, they were terrified, thinking that it was a ghost. And they cried out in fear. But at once Jesus said to them, “Courage! Don’t be afraid. It’s me!”.

Peter answered, “Lord, if it is you, command me to come to you walking on the water”. Jesus said to him, “Come”. And Peter got out of the boat, walking on the water to go to Jesus. But, in face of the strong wind, he was afraid and began to sink. So he cried out, “Lord, save me!”. Jesus immediately stretched out his hand and took hold of him, saying, “Man of little faith, why did you doubt?”. As they got into the boat, the wind dropped. Then those in the boat bowed down before Jesus saying, “Truly, you are the Son of God!”.

They came ashore at Gennesareth. The local people recognized Jesus and spread the news throughout the region. So they brought all the sick to him, begging him to let them touch just the fringe of his cloak. All who touched it became perfectly well.

Now we shall not look at Jesus sleeping on the boat while it sinks, nor rebuking the winds and the waves with a single word, so his disciples may be amazed (Mt 8:23-27). But, today’s action is no less disconcerting, whether for his first disciples or for us.

Jesus had obliged his disciples to get into the boat and go ahead of him to the other side; and after the crowds have eaten their fill, He had sent the crowd away. And, then, He went up the mountain by himself to pray. And He remained there alone. (Mt 14:22-23). Without his Master, the disciples were having troubles to face the wind. It was then when Jesus came to them walking on the water.

As plain and simple people would, the disciples were terrified to see him: men do not usually walk over water, so they thought they were seeing a ghost. But they were wrong: it was not an illusion what they were looking at, but the very Lord, who was inviting them – as He did quite often – not to be afraid and trust him to awake their faith in them.

This faith was first demanded to Peter, who said: “Lord, if it is you, command me to come to you walking on the water” (Mt 14:28). With these words, Peter showed that faith consists of abiding by the word of Christ: he did not say “let me walk on the water” but he just wanted to follow what the very and only Lord could command him to do, to believe the truthfulness of the Master’s words.

His doubts, however, made him reel, but they led the other disciples to bow down and confess before their Master: “Truly, you are the Son of God!” (Mt 14:33).

The group of those that already were apostles, but did not yet fully believe, when they saw the waters waving below the Lord’s feet and appreciated his steps were firm through the stormy waves (…) they believed Jesus was the true Son of God, and accepted him as such. – St. Ambrose. 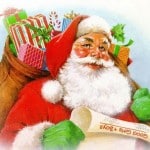 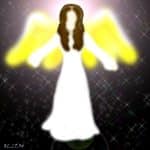 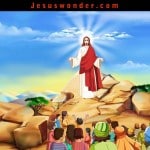 6 thoughts on “Jesus Walking On Water”