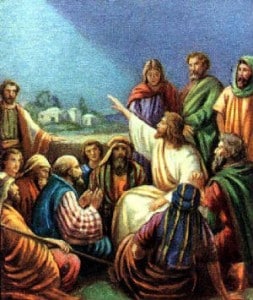 Not until halfway through the Feast did Jesus go up to the temple courts and begin to teach. The Jews were amazed and asked, “How did this man get such learning without having studied?” Jesus answered, “My teaching is not my own. It comes from him who sent me.Â If anyone chooses to do God’s will, he will find out whether my teaching comes from God or whether I speak on my own.Â He who speaks on his own does so to gain honor for himself, but he who works for the honor of the one who sent him is a man of truth; there is nothing false about him.Â Has not Moses given you the law? Yet not one of you keeps the law. Why are you trying to kill me?” “You are demon-possessed,” the crowd answered. “Who is trying to kill you?”Â Jesus said to them, “I did one miracle, and you are all astonished.Â Yet, because Moses gave you circumcision (though actually it did not come from Moses, but from the patriarchs), you circumcise a child on the Sabbath.Â Now if a child can be circumcised on the Sabbath so that the law of Moses may not be broken, why are you angry with me for healing the whole man on the Sabbath?Â Stop judging by mere appearances, and make a right judgment.”

Jews were astonished at the knowledge and teaching of Jesus, the eternal teacher and theyÂ wondered about its origin as He was never been taught. JesusÂ explains to them the secret of His knowledge. Jesus shows himself as aÂ medium through whom the wisdom of the Father is flowing. Jesus standsÂ for the Father by doing His will and seeking His glory. So Jesusâ€™Â teaching becomes the self revelation of the Father.

Jesus findsÂ himself to be in total dependence to the Father, His sender. In otherÂ words here Jesus is telling that the source of his knowledge is theÂ Father. Since Jesus is seeking His Father’s glory and doing His will, Fatherâ€™sÂ wisdom passes clearly through him without any hindrance. Those who doÂ the will of the Father can identify His teaching as coming from theÂ Father because Fatherâ€™s will is the same. Those who seek their ownÂ glory canâ€™t be true always as their selfishness blocks the Fatherâ€™sÂ wisdom from passing clearly through them.

Jesus, the teacher, shows Jews their problem, i.e they seek their own glory andÂ donâ€™t do the will of the Father. So they canâ€™t understand the sourceÂ and real meaning of Jesusâ€™ teaching. Every teaching is to be inÂ conformity with the will of the Father and it should give glory toÂ Him. If any teaching is aimed at selfishness and oneâ€™s own glory itÂ fails. Jesus tells them that they are trying to kill him as they denyÂ the heavenly source of his teaching and also donâ€™t look into theirÂ real message but only in their outward appearance.

Jesus shows thisÂ through his act of healing which is in real conformity with the lawsÂ of Moses who ordered to circumcise on Sabbath. The will of the FatherÂ is obeyed in and through Jesus’s deeds and words, they glorifyÂ Him.Â Jews say that Jesus has a demon. But Jesus shows them that theirÂ judgement is wrong. They judge by appearances and so they fail to doÂ the will of the Father because they seek their own glory.

Here Jesus, the teacher, welcomes us to the source of our authenticity. Only inÂ relation to the Father by doing His will and seeking His glory that weÂ can be men of God. Otherwise we may miss the real by incorrectÂ judgement based on appearances. And instead of doing Godâ€™s will, weÂ will be blocking His glory by seeking our glory. Jesus the eternalÂ teacher shows us how to be wise by doing God’s will and seeking HisÂ glory. 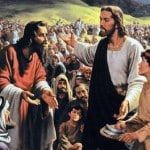 Video : The Best Skit I Have Ever Seen 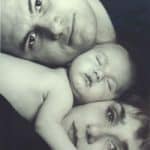 1 thought on “Jesus The Teacher”