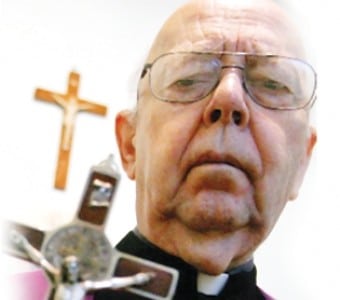 Generally the demon does all he can not to be discovered. He does not like to talk and tries everything to discourage both the exorcist and the possessed. Experience has taught me that this behavior follows four steps: prior to discovery, during exorcisms, at the beginning of liberation, and after liberation.

I must caution that there are never two identical instances. The behavior of the evil one is most unpredictable and takes many different forms. What I am about to describe refers to the most frequently encountered behavior.

Demonic possession causes physical and mental disturbances. Therefore the possessed is usually under a doctorâ€™s care, and nobody suspects the true nature of the problems. Often doctors try to cure the symptoms for a lengthy period and try many drugs, always with very limited results. Commonly, the patient goes from doctor to doctor, accusing them of incompetence. Mental symptoms are the hardest to cure; many times the specialists find nothing wrong-although this also happens often with physical illness-and often the family accuses the possessed individual of imagining his problems.

This is one of the heaviest crosses to bear for these â€œpatientsâ€; they are neither understood nor believed. Almost always, after fruitlessly searching for help from â€œofficial medicineâ€, these individuals knock at the door of â€œhealersâ€ or, worse, sorcerers, seers, and witch doctors. In this manner, the problems increases.

Normally, anyone who comes to the exorcist (following a friendâ€™s suggestion; very rarely a priestâ€™s advice!) has already knocked at every doctorâ€™s door and is thoroughlyÂ skeptical;Â many timesÂ he has tried sorcerers and warlocks. Often an inexcusable lack of ecclesiastical care in this field is added to the lack of faith or the lack of practice in the faith of these individuals; the result is an understandable delay in turning to the exorcist.

We must remember that even in the cases of complete possession-that is, in cases when the demon is the one talking and acting, using the victimâ€™s body-the demon does not act consistently. He alternates periods of actively (usually called â€œmoments of crisis â€œ) with unpredictable periods of rest. In this manner, with few exceptions, the person is able to function and hold a job or go to school in a seemingly normal manner. The person alone knows the tremendous effort that the performance of these tasks requires.

At the beginning the demon tries his best to remain undetected or at least to hide the seriousness of his possession, even if he is not always successful. At times he is forced by the strength of the exorcism to reveal his presence at the first prayers; other times more sessions are required before he is discovered.

I remember a young man who, at the first blessing, gave only a mild negative reaction. I thought, â€œthis is an easy one; I will be done after this blessing and a few more.â€ The second time, though, he became furious, and after that I could not begin an exorcism unless four strong men were present to subdue him.

Waiting for the hour of God

On other occasions, one must wait for the â€œhour of Godâ€. I clearly remember one person who had consulted several exorcists, including myself, without any indication of an evil presence. Finally, one time the demon was forced to reveal himself, and after that the exorcisms proceeded fruitfully. Sometimes, from the first or second blessing the demon reveals all his strength, which changes from person to person. At times the revelation is progressive; some possessed appear to have a different sickness at each session, giving the impression that every ill in the body must be brought out one at a time in order to be healed.

How Demons react to Exorcisms

The demon reacts in various manners to prayers and injunctions. Many times he tries to appear indifferent; in reality he suffers and continues to suffer increasingly until liberation is achieved. Some possessed individuals are silent and immobile, and, if provoked, any reaction is limited to the eyes. Others fling themselves about, and unless they are held down, they harm themselves. Others wail, especially if a stole is pressed to the affected parts of their bodies, as the Ritual suggests, or if they are blessed with the Sign of the Cross or with holy water. Very few are violent, and these must be held tightly by those who are helping the exorcist or by their relatives.

Demons are very reluctant to speak. The Ritual, very rightly, admonishes the exorcist not to ask questions out of curiosity, but to ask only what is useful for liberation. The first thing that must be asked is the name. For the demon, who is so reluctant to reveal himself, revealing himself is a defeat; even when he has revealed his name, he is always reluctant to repeat it, even during following exorcisms. Then we command the evil one to tell how many demons are present in a particular body. There can be many or few, but there is always one chief, and he is always the first to be named.

When the demon has a biblical name or one given in tradition (for example, Satan, Beelzebul, Lucifer, Zebulun, Meridian, Asmodeus), we are dealing with â€œheavy weightsâ€, tougher to defeat. The degree of difficulty is also relative to the intensity with which the demon possesses a person. When several demons are present, the chief is always the last to leave.

The strength of possession is manifested also from the reaction of the demon to holy names. Generally the evil one does not and cannot say those names; he substitutes expressions such as â€œheâ€ (referring to God or Jesus) or â€œsheâ€ (referring to our Lady). Other times he saysâ€™ â€œyour Bossâ€ or â€œyour Ladyâ€, to indicate Jesus or Mary. If the possession is very strong and the demon is high-ranking (I repeat that demons keep the rank that they held when they were angels, such as thrones, principalities, or dominions), then it is possible for him to say the name of God and Mary, always followed by horrible blasphemies.

Some believe, I know not why, that demons are talkative and that, if they are present during an exorcism, the demon will publicly denounce all their sins. It is a false belief; demons are reluctant to speak, and when they talk they say silly things to distract the exorcist and escape his questions.

Father Candido was exorcising a handsome young man who was possessed by a great beast of a demon. Trying to discourage the exorcist, the demon said: â€œCanâ€™t you see that you are wasting your time? This one never prays. He goes around with… and does…â€ and there followed a long list of ugly sins. At the end of the exorcism, Father Candido fruitlessly tried to convince that young man to make a general confession. It was necessary almost to drag him into the confessional, where he hastened to say that he had no sins to confess. Then Father Candido asked, â€œBut did you not do this and such?â€ Dumbfounded, the poor man was forced to admit his transgressions.

The Ritual suggests asking other questions dealing with the length of time of possession, the motive, and similar topics. I will mention later how we must behave in case of spells and what questions to ask. Let us not forget that the demon is the prince of lies. He freely accuses one person or another to foster suspicion and enmity; his answers must be sifted carefully.

I will say generally questioning the demons is not of great importance. For instance, often when the demon sees he is losing strength, he gives one date as the day of his departure but then lingers on. An experienced exorcist such as Father Candido was often able to guess not only what kind of demon he was dealing with but also often even his name; therefore he did not ask too many questions.

In cases of strong possessions the demon might speak voluntarily to discourage the exorcist. Many times I was told, â€œYou cannot do anything against me!â€ â€œI will throw you out of bed.â€ Then, confronted with my answers, he would fall silent.Â For instance, when I say, â€œI am enveloped within the mantle of our Lady. What can you do to me?â€ or â€œThe Archangel Gabriel is my protector; try and fight him!â€ or â€œMy guardian angel watches over me so that I wonâ€™t be touched; you cannot harm meâ€, the demon remains silent.