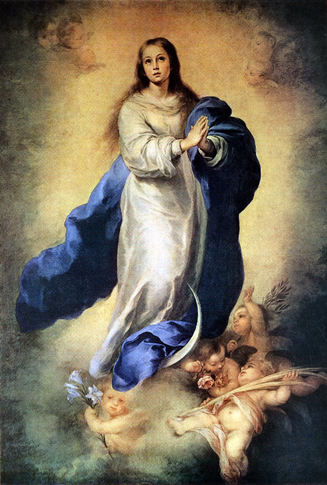 The dogma of the Immaculate Conception asserts that, ” from the first moment of her conception, the Blessed Virgin Mary was, by the singular grace and privilege of Almighty God, and in view of the merits of Jesus Christ, Savior of Mankind, kept free from all stain of original sin.”

St. Ephraem of Syria wrote in the Nisibene Hymns: “Certainly You alone and your mother are from every aspect completely beautiful for there is no blemish in Thee, my Lord, and no stain in Thy mother.” (Hymn. B. Maria 13:5-6)

The Immaculate Conception isÂ the conception of the Virgin Mary without any stain (“macula” in Latin) of original sin. It is sometimes also called the Immaculata, also in artistic contexts. The dogma thus says that, from the first moment of her existence, she was preserved by God from the lack of sanctifying grace that afflicts mankind, and that she was instead filled with divine grace. It is further believed that she lived a life completely free from sin.

In the words of Pope Pius XII in Mystici Corporis, “she was free from any personal or hereditary sin”. Her immaculate conception in the womb of her mother, by normal sexual intercourse, should not be confused with the doctrine of the virginal conception of her son Jesus. The apparitions of Mary to St. Catherine Laboure in 1830 under the image of the Miraculous Medal helped to give further support , with its invocation, “O Mary, conceived without sin, pray for us who have recourse to thee.”

As we celebrate the beautiful solemnity of the Immaculate Conception of Our Lady, may Mary’s holiness encourage us to seek her help and continued protection in our own efforts to overcome sin and lead holy, sanctified lives.

2 thoughts on “Solemnity of the Immaculate Conception – December 08”