Our ministries go out of strength due to lack of proper connection with the true power source.

A man from a remote village had gone to the city. He was wonder struck by seeing the modern technologies and the city way of life. He saw the whole city was illuminated with bright lights, drinking water was supplied to houses and fans gave cool air in the hot summer. He wanted to enjoy the same, back in his village. Therefore, he bought some electric lights, fans and water taps. When he reached his village he fixed the light and fan waiting for the light and cool air. He fixed the water tap in a wall and waited for water. But nothing happened because the electric bulb and fan were not connected to electricity and the water tap was not connected to a source of water.

Today, we too are attracted to Christ and want to be partner in His mission work. Therefore we build massive buildings and spend lot of money to help the poor and the needy. But if we are not connected to Christ and live a Christ centered life, we cannot be effective and faithful in the mission of Jesus Christ. Therefore, the scripture tell us to go beyond, and be rooted in Christ and have an intimate experience of God, only then we would be able to withstand the trials and persecution that come on the way.

This message is beautifully brought out in the life of St. Paul. Prophet Amos tangibly experiences the living Word of God and that experience leads him to raise his voice against the unjust structures of the society and exploiting religious leaders of the time. He cries out: â€œLet justice role down like waters and righteousness like an ever flowing stream.â€ Yes, he is fully aware that challenging the then existing system would bring danger to his life. But he listens to the Word of God and relies on the power of God.

In the New Testament, we see Jesus sending the 12 Apostles for His mission.Â But before He sends them out for the mission, He keeps them with Him, because He wants them to have a personal relationship with Himself. He desires that they live in His presence to learn, to draw strength, courage and spiritual energy from Him. He wants them to see Him praying, healing and teaching so that their faith in Him may be deeply rooted and they may eventually begin to absorb and assimilate His very character and behavior.

We too are called to be with Him, to experience Him deeply and follow Him very closely. Only then we become the true ambassadors of Jesus and full representatives to carry out His message to the whole world. Like the prophet Amos, St. Paul, the 12 apostles and there are many, we too are sent on a mission to fight against the evil, sinful, unjust and ungodly ways of the world. We are sent to alleviate pain, suffering, sorrow and misery from the lives of people around us.

In Japan there was a beautiful statue of Jesus Christ placed in the middle of a village. During the World War II, bomb fell in the village and the statue was broken into pieces. The parish priest collected the broken pieces and joined them together. Unfortunately the hand of Jesus was not found. So, the parish priest wrote bellow the statue that, â€œwho would be my hand to help out my people?â€ By seeing this all the people came together and extended their hands to rebuild the lives of the people over there. 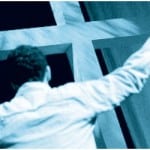 The Problem With Faith 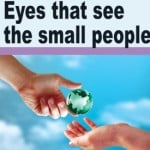 Eyes That See The Small People

Having A Humble Opinion Of Self 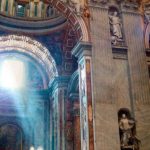