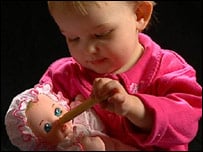 I hurried into the local department store to grab some last minute Christmas gifts. I looked at all the people and grumbled to myself. I would be in here forever and I just had so much to do. Christmas was beginning to become such a drag. I kinda wished that I could just sleep through Christmas. But I hurried the best I could through all the people to the toy department. Once again I kind of mumbled to myself at the prices of all these toys. And wondered if the grandkids would even play with them.

I found myself in the doll aisle. Out of the corner of my eye I saw a little boy about 5 holding a lovely doll. He kept touching her hair and he held her so gently. I could not seem to help myself. I just kept looking over at the little boy and wondered who the doll was for. I watched him turn to a woman and he called his aunt by name and said, “Are you sure I don’t have enough money?”

She replied a bit impatiently, “You know that you don’t have enough money for it.” The aunt told the little boy not to go anywhere that she had to go get some other things and would be back in a few minutes. And then she left the aisle. The boy continued to hold the doll.

After a bit I asked the boy who the doll was for. He said, “It is the doll my sister wanted so badly for Christmas. She just knew that Santa would bring it.” I told him that maybe Santa was going to bring it. He said “No, Santa can’t go where my sister is. I have to give the doll to my Momma to take to her.”

I asked him where his sister was. He looked at me with the saddest eyes and said “She has gone to be with Jesus. My Daddy says that Momma is going to have to go be with her.” My heart nearly stopped beating.

Then the boy looked at me again and said, “I told my Daddy to tell Momma not to go yet. I told him to tell her to wait till I got back from the store.” Then he asked me if I wanted to see his picture. I told him I would love to. He pulled out some pictures he’d had taken at the front of the store. He said “I want my Momma to take this with her so she don’t ever forget me. I love my Momma so very much and I wish she did not have to leave me. But Daddy says she will need to be with my sister.”

I saw that the little boy had lowered his head and had grown so very quiet. While he was not looking I reached into my purse and pulled out a hand full of bills. I ask the little boy, “Shall we count that money one more time?“ He grew excited and said, “Yes, I just know it has to be enough.” So I slipped my money in with his and we began to count it. And of course it was plenty for the doll. He softly said, “Thank you Jesus for giving me enough money.” Then the boy said, “I just ask Jesus to give me enough money to buy this doll, so Momma can take it with her to give to my sister and he heard my prayer! I wanted to ask him for enough to buy my Momma a white rose, but I didn’t ask him, but he gave me enough to buy the doll and a rose for my Momma. She loves white roses so very very much.”

In a few minutes the aunt came back and I wheeled my cart away. I could not keep from thinking about the little boy as I finished my shopping in a totally different spirit than when I had started. And I kept remembering a story I had seen in the newspaper several days earlier about a drunk driver hitting a car and killing a little girl and the Mother was in serious condition. The family was deciding on whether to remove the life support. Now surely this little boy did not belong with that story.

Two days later I read in the paper where the family had disconnected the life support and the young woman had died. I could not forget the little boy and just kept wondering if the two were somehow connected. Later that day, I could not help myself and I went out and bought some white roses and took them to the funeral home where the young woman was. And there she was holding a lovely white rose, the beautiful doll, and the picture of the little boy in the store. I left there in tears, my life changed forever. The love that little boy had for his little sister and his mother was overwhelming. And in a split second adrunk driver had ripped the life of that little boy to pieces.

This holiday season and through out the coming year, please, Don’t Drink and Drive!