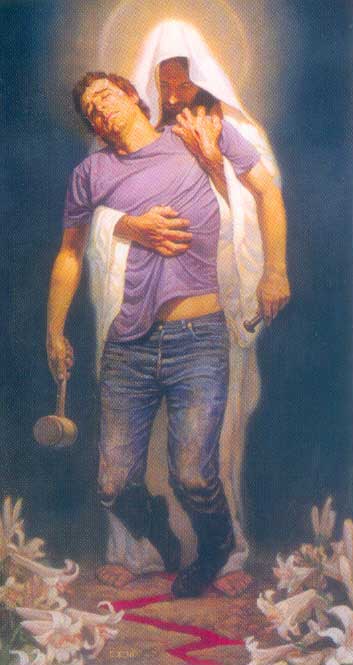 “What has God ever done for me?” grumbled an angry 23 year old man named Victor. “I mean, why should I believe this so-called God guy loves me as you say He does when He hasn’t done anything to help me or my life?!”

“Oh?” said his uncle sitting next to him on the bus. “What do you feel has gone wrong in your life that God caused?” he continued.

Victor snapped, “I didn’t say God caused it, but He sure didn’t do anything to help me out! I had to deal with some pretty bad things all on my own, and, no thanks to Him, I fixed them all on my own too!”

His uncle nodded slightly and replied, “I assume you are referring to the hard time you began having when you got involved in street drugs and heavy drinking?”

“That’s part of it,” responded Victor as he glared out the bus window.

His uncle turned to look at him, and then said, “Did your parent’s teach you, or tell you to get involved with these dangerous substances that can affect how you think and behave?”

“Of course not!” snapped Victor.

“I’m guessing they tried warning you, but you chose not to obey, correct?” responded his uncle as he straightened himself out in his seat. He continued, “And they probably taught you the importance of eating right, taking care of your health, staying close to God, and being careful about the friends you chose, right?”

Victor hesitated, then angrily replied, “Alright!, They were MY choices, not my parent’s! I take full responsibility for my actions!”

Victor’s uncle again turned to look at him, then quickly replied, “Do you? About everything?”

Victor looked puzzled. “What are you talking about?”

His uncle straightened his back one more time, and replied, “Do you also take responsibility for the fact it was YOU who turned your back on God? You keep asking what has God done for you, but it would seem to me that the question really is, what have YOU done for God lately?”

Victor immediately snapped at his uncle, “Hey, I prayed out to God a few times to make all the bad things go away, but He didn’t!”

His uncle nodded, reached for Victor’s hand, and said, “He (God) didn’t, or YOU didn’t?”

Victor quickly replied, “I kept on drinking, doing drugs, being disrespectful to my family, and other things I probably shouldn’t have, but God could have stopped me, made all the bad things go away, and He didn’t! He ignored me, or maybe He doesn’t even exist at all so that’s why He did nothing!”

As he held his nephew’s hand, Victor’s uncle calmly responded, “Victor, God is not a puppet master who pulls our strings so we will do what He wants us to do. He loves us so much that He gave us free-will. Even though you may have wanted God to take all the bad things away, your actions and choices revealed that you really didn’t want anything to change. How do I know that? Because isn’t it true you kept on drinking, taking drugs, and being disrespectful to your family?”

Victor was at a loss for words.

“Words are often shallow, Victor. It is our actions which prove what is really in our heart. What do you think your actions have showed God? Have they showed Him you love Him and want to be close to Him; that you want Him to be Lord of your life? Or, do they show Him that you want to ignore His commands, and remain in the lifestyle you have been living, and only call on Him when the going gets tough?”

The look on Victor’s face began to change. The anger and resentment he had been holding in so long toward his family and God suddenly seemed to melt away. “I guess I had been blaming my parents and God, when I should have been blaming my self,” he said quietly.

Many people blame God for what they themselves have chosen. We must remember, when we choose the action, we also choose the consequence.

As a loving Heavenly Father, God wants the best for us, and He is willing and able to deliver us from even the most dire circumstances. However, we need to also want it for ourselves, not just through lip-service, but through word AND deed.

Contributed by Melanie Schurr — Melanie Schurr is the author of “Ecstatic Living: A Christian marriage manual and Life-guide”, “Son Salutations” and “Daily Contemplations” , a collection of read-one-a-day modern inspirations.