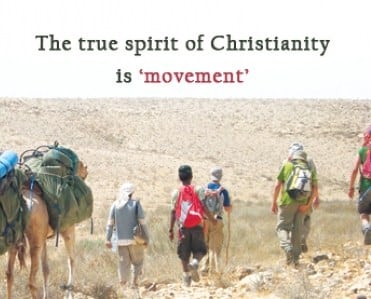 The Bible itself is a story of migration; an exodus of generations. Abraham was nomadic! His grandchildren were immigrants in Egypt. Even Jesus was in exile in Egypt. Kudos! Migration is the true spirit of Christianity. Migration is a new point of evangelization and solidarity.

I know, it is hard to digest. We often feel alienated and dejected. We are ‘rootless’, well, sometimes ‘ruthless’ too. We are aliens in very strange terrains.Â But, one who accepts a stranger accepts the Lord:Â ‘I was a stranger and you made me welcome’ (Mt. 25:35).Â I dare to say, migration is a divine vocation; a vocation for re-evangelization of the world.

Migration is the movement of people from one location to another for temporary or permanent living. It is presently a worldwide phenomenon. This covers persons of various categories, such as migrant workers and their families, students, refugees, asylum-seekers, internally displaced persons, stateless persons, victims of human trafficking, particularly women and children, and others.

The migration story is a key to Biblical ancestry.Â The Lord said to Abraham: ‘Leave your country, your relatives, and your father’s home, and go to a land that I am going to show you. I will give you many descendants, and they will become a great nation. I will bless you and make your name famous, so that you will be a blessing.’ Genesis 12: 1-2

That was the starting point of the migration of the ‘God chosen’ man; a true vocation by the God Himself. Abraham recognised this divine call and migrated to Canaan; an alien land.

Abraham’s second migration was from Canaan to Egypt to survive from the famine in Canaan.Â In Genesis 15, God tells Abram his role in this ‘migration story’.Â The Lord said to him, ‘your descendants will be strangers in a foreign land; they will be slaves there and they will be treated cruelly for four hundred years’ (Genesis 15: 13)

The story continues in Abraham and Sarah’s desire for children. At Sarah’s insistence, Hagar, the Egyptian slave-girl, the foreigner, bears Abraham a child, Ismael. Eventually they are exiled into the wilderness and God promises to make Ismael a great nation â€“ the same promise given to Isaac. (Genesis 21)
The migration story continues with famine causing Isaac to settle in the land of Gerar as an alien. (Gen. 26:2) It picks up with Jacob travelling to another land for a wife. Later he is forced to flee because of his sons’ violence. God directs him to Bethel. We eventually learn that Jacob settles in ‘the land where his father had lived as an alien, the land of Canaan.’ (Gen. 37:1)

The story of Joseph in Old Testament is a true story of giving asylum to an entire community. Eventually, they are becoming a larger community in the foreign land. God’s plans are weird! Â Those jealous brothers sell Joseph into slavery and being transported to Egypt and rising to power. It comes full circle, when famine strikes over much of the world and Joseph’s brothers come to Egypt seeking grain.Â The circle is complete when Joseph’s father and brothers, their families, flocks, and all they possess leave Canaan and migrate to Goshen, where there is food. (Genesis 37-47)

The book of Exodus begins with a story of persecution of infant boys. They are all to be thrown into the Nile. However, one, who would in today’s language be referred to as a ‘Unaccompanied Alien Child’ is rescued from the river and raised in Pharaoh’s palace. His name was Moses. Moses becomes an exile in Midian due to some unfortunate events.

In Midian, Moses marries Zipporah and is eventually called by God to return to Egypt because, in God’s words, ‘The cry of the Israelites has now come to me; I have also seen how the Egyptians oppress them. So come, I will send you to bring my people, the Israelites, out of Egypt.’Â Moses wonders how he could possibly do this and God replies, ‘I will be with you.’ (Exodus 3:1- 3:12)Â Moses returns to Egypt, and facilitates the Hebrew Exodus through a series of plagues and dialogues with Pharaoh. When his people are finally permitted to leave, they leave most refugees leave, without much time to pack, but with God leading them.

The uprooted story continues throughout the Bible and the story of the exile of the Israelites. This can be followed in Kings, Chronicles, Esther, Jeremiah, Isaiah, Ezekiel, and Amos.Â Literally everyone is on the move and most are going into exile. This includes the prophets, the priests, and the people. Exile shows no mercy, however there are persons who did not and do not go into exile.

Jesus was born in Bethlehem, to which his parents traveled because of the census and taxation. We know that Jesus, Mary, and Joseph settled for about two years in Bethlehem, until after the Wise Men’s appearance.

Once the three kings left, an angel appeared to Joseph in a dream and said, ‘Get up, take the child and his mother, and flee to Egypt, and remain there until I tell you; for Herod is about to search for the child, to destroy him. Then Joseph got up, took the child and his mother by night, and went to Egypt and remained there until the death of Herod. This was to fulfill what had been spoken by the Lord through the prophet, ‘Out of Egypt I have called my son.” (Matthew 1:13-15)

Jesus, Mary, and Joseph became ‘asylum seekers’ in Egypt. Without travel documents, they cross the border, looking for safety and sanctuary. Someone takes them in. Someone welcomes them and protects them.

Thus says the LORD of hosts, the God of Israel, to all the exiles whom I exiled from Jerusalem to Babylon:Â ‘Build houses to dwell in; plant gardens, and eat their fruits. Take wives and beget sons and daughters; find wives for your sons and give your daughters husbands, so that they may bear sons and daughters. There you must increase in number, not decrease. Promote the welfare of the city to which I have exiled you; pray for it to the LORD, for upon its welfare depends your own.’ Jeremiah 29: 4-7

The first and primary duty of each migrant is to work hard for the well-being of the country they are migrated in. A Christian migrant needs to pray for the host country.

A vision of Isaiah announced this: ‘In the days to come the mountain of the temple of Yahweh shall tower above the mountainsâ€¦ All the nations will stream to it’ (Isaiah 2:2).Â In the gospel Jesus Himself prophesied that ‘people from east and west, from north and south, will come to take their places at the feast in the kingdom of God’ (Lk 13:29), and the Apocalypse sees ‘a huge numberâ€¦ from every nation, race, tribe and language’ (Ap 7:9).

The Bible begins with the ‘migration’ of God’s spirit and ends with John in exile on the Isle of Patmos â€“ between those two events the uprooted people of God seek safety, sanctuary and refuge.

2 thoughts on “The Bible : A Story Of Migration”