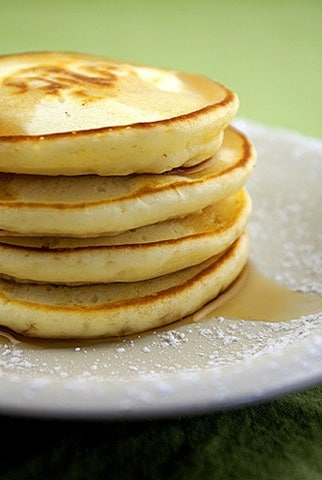 Six year old Brandon decided one Saturday morning to fix his parents pancakes. He found a big bowl and spoon, pulled a chair to the counter, opened the cupboard and pulled out the heavy flour canister, spilling it on the floor. He scooped some of the flour into the bowl with his hands, mixed in most of a cup of milk and added some sugar, leaving a floury trail on the floor which by now had a few tracks left by his kitten. Brandon was covered with flour and getting frustrated.

He wanted this to be something very good for Mom and Dad, but it was getting very bad. He didn’t know what to do next, whether to put it all into the oven or on the stove, and he didn’t know how the stove worked!

Suddenly he saw his kitten licking from the bowl of mix and reached to push her away, knocking the egg carton to the floor. Frantically he tried to clean up this monumental mess but slipped on the eggs, getting his pajamas white and sticky. And just then he saw Dad standing at the door. Big crocodile tears welled up in Brandon’s eyes. All he’d wanted to do was make them proud. He was sure a scolding was coming, maybe even a spanking.

But his father just watched him. Then, walking through the mess, he picked up his crying son, hugged him and loved him, getting his own pajamas white and sticky in the process.

That’s how God deals with us. We try to do something good in life, but it turns into a mess. Our marriage gets all sticky or we insult a friend or we can’t stand our job or our health goes sour. Sometimes we just stand there in tears because we can’t think of anything else to do. That’s when God picks us up and loves us and forgives us, even though some of our mess gets all over Him.

But just because we might mess up, we can’t stop trying to “make pancakes,” for God or for others. Sooner or later we’ll get it right, and then they’ll be glad we tried…

This entry is filed under Stories. You can follow any responses to this entry through the RSS 2.0 feed. You can leave a response, or trackback from your own site.
One Response to “Story : Pancakes and Love”
1

dis website is 2 encouragin to all ppl who r searching for god’s message.aft i hav gone thou dis site trust me my faith has become more strong.pls evry christain has 2 access dis website.