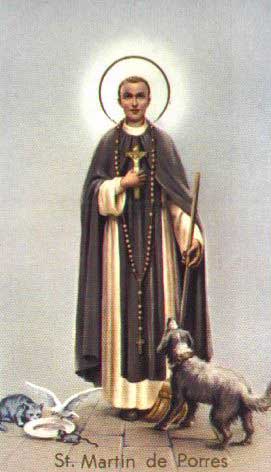 St. Martin de Porres was born at Lima, Peru, in 1579. His father was a Spanish gentleman and his mother a coloured freed-woman from Panama. At fifteen, he became a lay brother at the Dominican Friary at Lima and spent his whole life there-as a barber, farm laborer, almoner, and infirmarian among other things.

Martin had a great desire to go off to some foreign mission and thus earn the palm of martyrdom. However, since this was not possible, he made a martyr out of his body, devoting himself to ceaseless and severe penances. In turn, God endowed him with many graces and wondrous gifts, such as, aerial flights and bilocation.

St. Martin’s love was all-embracing, shown equally to humans and to animals, including vermin, and he maintained a cats and dogs hospital at his sister’s house. He also possessed spiritual wisdom, demonstrated in his solving his sister’s marriage problems, raising a dowry for his niece inside of three day’s time, and resolving theological problems for the learned of his Order and for bishops. A close friend of St. Rose of Lima, this saintly man died on November 3, 1639 and was canonized on May 6, 1962. His feast day is November 3.

Many of his fellow religious took him as their spiritual director, but he continued to call himself a “poor slave.” He was a good friend of another Dominican saint of Peru, Rose of Lima.

He is the first black saint from the Americas.