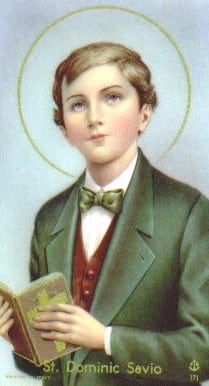 St. Dominic Savio was born in Italy in 1842. One day when he was just four, he disappeared and his good mother went looking for him. She found the little fellow in a corner praying with his hands joined and his head bowed. He already knew all his prayers by heart! At five, he was an altar boy. When he was seven, he received his First Holy Communion. On that solemn day, he chose a motto: “Death, but not sin!” and he kept it always.

“A teenager such as Dominic, who bravely struggled to keep his innocence from Baptism to the end of his life, is really a saint,” said Pope St. Pius X.

Dominic was an ordinary boy with an extraordinary love for God.

At the age of twelve, Dominic entered the school run by St. John Bosco. Don Bosco examined him first and at the end of the questions, Dominic asked,

“I think you’re good material,” answered the priest, with a big smile.

“Well, then,” said Dominic, “You are a good tailor, so if the material is good, take me and make a new suit out of me for Our Lord!”

Everyone in the school saw from the way he prayed that this boy was different. He greatly loved all the boys, and even though he was younger, he used to worry about them. He was afraid that they would lose the grace of God by sinning.

One day, a fellow brought a magazine full of bad pictures to school. In a minute, a group of boys had gathered around him to see it. “What’s up?” wondered Dominic, and he, too, went to look. Just one peek was enough for him. He grabbed the magazine and tore it to pieces! “Poor us!” he cried in the meantime, “Did God give us eyes to look at such things as this? Aren’t you ashamed?”

“Oh, we were just looking at these pictures for the fun of it,” said one boy. “Sure, for fun,” answered Dominic, “and in the meantime you’re preparing yourselves to go to hell!”. – “Oh, what’s so wrong about looking at these pictures anyway?” another fellow demanded. Dominic had a ready answer. “If you don’t see anything wrong,” he said sadly, “this is even worse. It means you’re used to looking at shameful things!”. No one said anything after that. They all realized that Dominic was right.

Another time he stopped a terrific stone-throwing fight between two angry boys. Holding up a little crucifix between them, he said, “Before you fight, look at this and say, ‘Jesus Christ was innocent and He died forgiving His murderers. I am a sinner, and I am going to hurt Him by not forgiving my enemies.’ Then you can start – and throw your first stone at me!” . The two boys were so ashamed of themselves that they apologized, and promised to go to confession too.

One day Dominic began to feel sick and was sent home to get better. While at home he grew worse, instead, and received the last Sacraments. He was only fifteen then, but he did not fear death. In fact, he was overjoyed at the thought of going to Heaven. Just before he died, he tried to sit up.

“Goodbye,” he murmured to his good father. Suddenly his face lit up with a smile of great joy and happiness. “I am seeing such wonderful things!” he exclaimed. Then he spoke no more, for he had gone to Heaven.

Dominic is the patron saint of choir boys and of the falsely accused.

This latter title was given to him due to the following incident. One time, two boys filled the school stove with snow and garbage during the cold winter months. When the teacher came back into the room, they falsely accused Dominic of doing the “dirty” deed. Although disciplined in front of the entire class, Dominic refused to tell on the two mischievous boys. When the truth was later revealed, Dominic was asked why he didn’t confess to his innocence. He remarked that he was imitating Our Lord, Who remained silent during His persecutions and crucifixion.

This entry is filed under Saints. You can follow any responses to this entry through the RSS 2.0 feed. You can leave a response, or trackback from your own site.
Your Thoughts Are Welcome | Leave a Reply
Prev/Next Posts
« St. Jude Thaddaeus | Home | St. John Bosco »
Subscribe For Free
Pages
Top Devotional Songs
Today's Top 10
Play Songs Online
Categories
Most Popular Articles
Most Discussed Posts