Easter Sunday – The Resurrection of Jesus 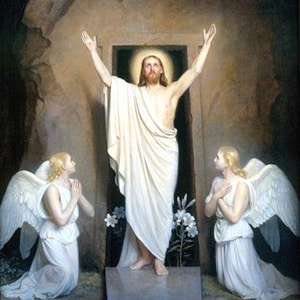 Today we celebrate EASTER – The Resurrection of Jesus Christ – His return from death after the Crucifixion. It is the most important Christian festival.

Easter is a festival of Enlightenment. It is the day that Jesus rose from death. It was on a Sunday morning. Mary Magdalene and other women had gone to look at the tomb where Jesus was buried. But to their horror and bewilderment they met an empty tomb. Beside the tomb stood two angels who said to them; “Why do you look for the living among the dead? He is not here, He has risen!” (Luke: 24:5)

This was the great turning point that transformed the story of Jesus which seemed to have ended with His tragic death on the Cross on Friday evening.

Most, if not all of the Christian faith, hang on the reality of Jesus’ resurrection from the dead. The apostle Paul argued that if the resurrection had not happened then our preaching would be in vain, we would be misrepresenting God, our faith would be futile, we would have no resurrection ourselves, and we would still be dead in our sins. “For as by a man came death,” speaking of Adam, “so also in Christ shall all be made alive” (1 Cor. 15:21). In Adam we all die. But in Christ (namely, His resurrection) we shall all live eternally.

The resurrection of Christ seals the deal. His testimonies, His life, His judgments, His forgiving, His promising, His decrees all depend on His ability to follow through with His resurrection work. When Jesus rose from the dead – He settled it. His resurrection made the most powerful statement this earth has ever heard – Jesus is God and is victor over sin and death.

Biblical evidence for the resurrection

There is plenty of biblical evidence for the resurrection. Matthew recorded the account describing that Mary Magdalene and some others witnessed the tomb to be empty where Jesus’ dead body once laid. An angel appeared to them saying that Jesus was not there; rather “he has risen, as he said” (Matt. 28:6).

Luke also wrote of this account and mentions later that Jesus walked with two men on the road to Emmaus (Luke 24:13:36). He also appeared to hundreds more and the disciples collectively. The letters of the New Testament depend on this truth. In fact, the final book of the Bible, John’s Revelations, says that Jesus will soon return. If He were still dead, all of these accounts would be wasted. The resurrection proves much.

Unlike the other few resurrections in the Bible, like Lazarus, Jesus’ was unique. The other ones could be defined as a reconstitution of the body. That is to say that the body was made alive again – yet it was still the same body that would die again. Jesus, on the other hand, was raised with an incorruptible body. It was one that would never die or suffer again.

Heavenly Father and God of mercy,
I believe that Jesus is alive and has
become the Lord of life.

From the waters of Baptism you have
raised me with him and renewed your
gift of life within me.

Increase in my mind and heart
the risen life I share with Christ
and help me to grow in your
wisdom and grace.

Lord Jesus, you appeared to your
apostles after the resurrection and filled
their hearts with joy when you said to them
“Peace be with you”.

May the peace of your presence
abide with me and make each day you
give me the most beautiful day of my life.

Lord Jesus, you triumphed over death and
destroyed the power of death in me,
may I live only for you.

Risen Lord, you brought confusion
on the guards at your tomb but joy
to your disciples, grant me the fullness
of joy as I serve you in spirit and truth.

You promised to be with your disciples,
Lord, to the end of the world, stay with
me today and remain with me always.

King of glory, center of my life,
grant that when you come again, I may
be one with you in glory.

Lord Jesus, purify my heart with your truth
and guide me in the way of holiness,
so that I may always do what is
pleasing in your sight. 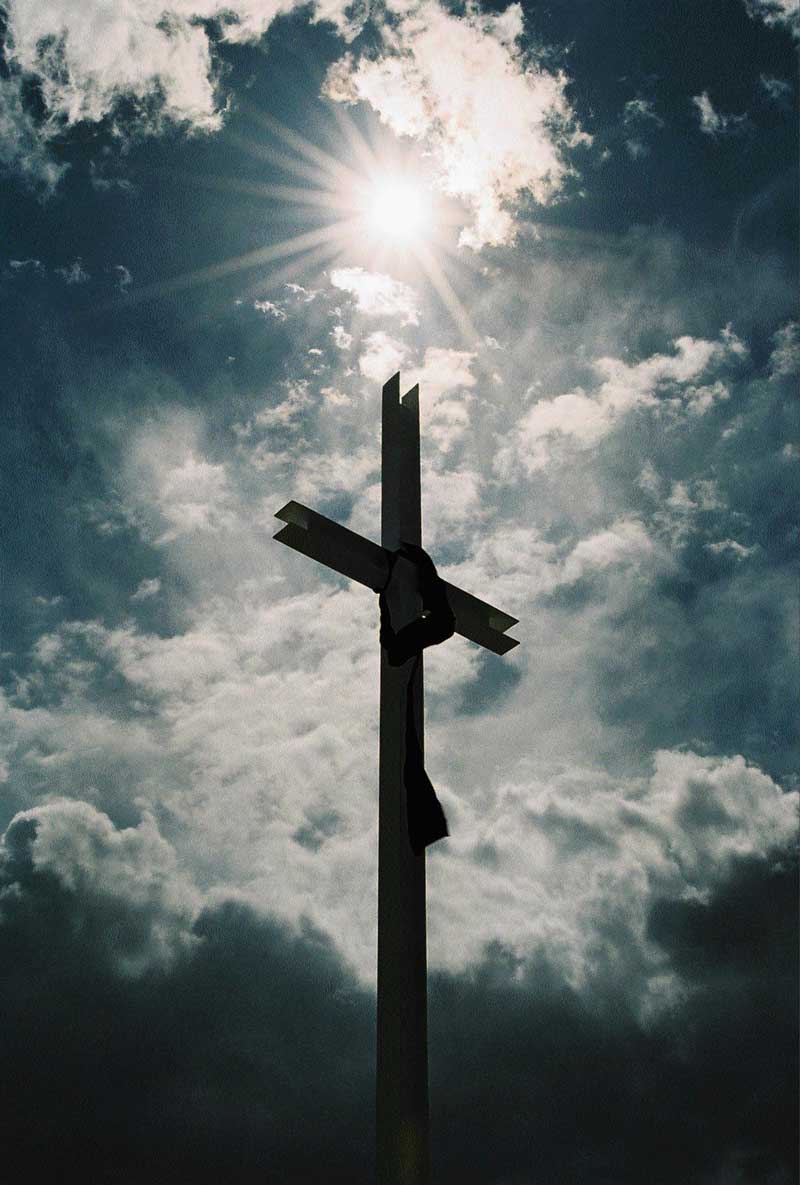 Good Friday is the Friday before Easter.

We all know that it commemorates the execution of Jesus by crucifixion.

He took up our infirmities and carried our sorrows…he was pierced for our transgressions…crushed for our iniquities; the punishment that brought us peace was upon him, and by his wounds we are healed. We all, like sheep, have gone astray, each of us has turned to his own way; and the Lord has laid on him the iniquity of us all. He was oppressed and afflicted, yet he did not open his mouth; he was led like a lamb to the slaughter, and as a sheep before her shearers is silent, so he did not open his mouth…he was cut off from the land of the living; for the transgression of my people he was stricken – – – Isaiah 53:4-8

We must not forget that our God deeply loves the world or to put it badly, the non-elect. We are reminded of this even as, in his dying breath, Jesus forgives those crucifying soldiers – whose care for him extends only to mocking threats and the careful division of his clothes. Here are two prayers for Good Friday.

Lord,
by shedding his blood for us,
your Son, Jesus Christ,
established the paschal mystery.
In your goodness, make us holy
and watch over us always.
We ask this through Christ, our Lord. Amen.

Lord,
by the suffering of Christ your Son
you have saved is all from the death
we inherited from sinful Adam.
By the law of nature
we have borne the likeness of his manhood.
May the sanctifying power of grace
help us to put on the likeness of our Lord in heaven
who lives and reigns for ever and ever. Amen.

This day, this Friday, is indeed good. On it our God demonstrated his love for the world and Christ bore our wretched sins. We who now bear his name would do well to treat our sin with similar gravity and the world with similar love.

Since today is the day on which Christ went through so much pain and passion, we should also do something which reminds us of His supreme sacrifice, like watching the movie ‘The Passion of Christ’, helping the sick, the aged and the orphaned or doing any such activity.

Maundy Thursday – The Thursday before Easter 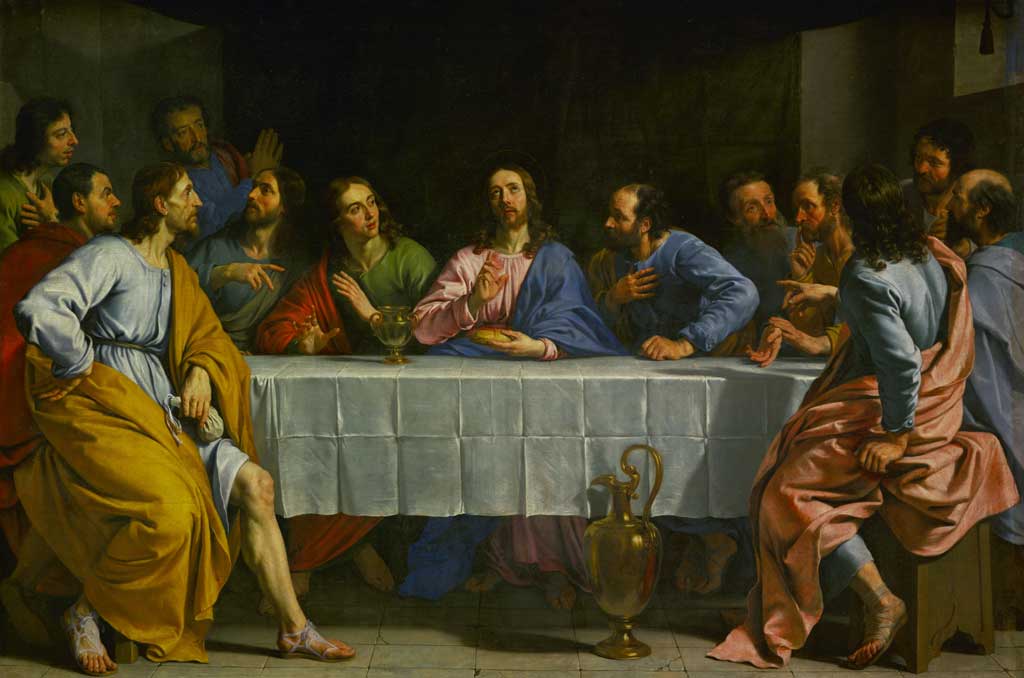 Today is Maundy Thursday – The Thursday before Easter. It is the day of the Last Supper, when Jesus washed the feet of his disciples and established the Holy Eucharist. Today is also called Holy Thursday.

During the Last Supper, Jesus took bread and wine and shared them with his disciples. We continue to share bread and wine as part of their worship in church. The night of Maundy Thursday is the night on which Jesus was betrayed by Judas in the Garden of Gethsemane.

The name ‘Maundy’ is derived from the Latin word “mandatum”, meaning a commandment. Jesus Christ, at the Last Supper, commanded: – ‘And now I give you a new commandment: love one another. As I have loved you, so you must love one another.’ John 15:12

In Roman Catholic churches the anthem Mandatum novum do vobis (a new commandment I give to you) would be sung on Maundy Thursday. Maundy coins are specially minted for the occasion and are legal tender and, as they are produced in such limited numbers, they are much sought after by collectors.

We commemorate the Last Supper in a special Eucharist. In some churches, they may wash each other’s feet. After the service the altar is stripped. Some Christians may hold an all night vigil in church, remembering Christ’s time in the Garden of Gethsemane.

Dear God, On this day when you were turned over to face death on the cross, let us remember that only you are God and only you can say what is bad or good. Help us to remember the evil done this night lead to the greatest good that man kind could ever have wished. That it is only our ignorance which makes us condemn those who killed you instead of praising them as the heroes who made Easter possible. Only you know how you perceive them, and us. So help us to know that we are here to love you and one and other. Not condemn, just love. The love that Jesus showed us every day of his life and death. Amen.