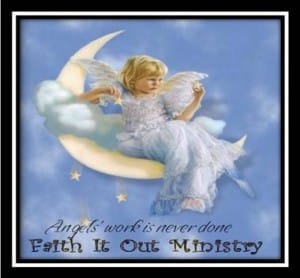 â€œKeep on loving each other as brothers.Â Do not forget to entertain strangers,Â for by so doingÂ some people have entertained angels without knowing it.Â Remember those in prison as if you were their fellow prisoners,Â and those who are mistreated as if you yourselves were suffering.â€ – (Hebrews 13:1-3)

How would you act if an angel came to your door?Â How about an itinerant preacher you encounter on the street?

It may be a clerk, policeman, meter reader,Â repairman â€• as a matter of fact it could be anyone.

Someone you encountered at the grocery store,Â or behind you at the checkout stand.

Would you be able to discern if any or all of these may be angels?

In Scripture we read that from time to time angels appear to humans.Â There have been reports in our modern era of encounters with angelic beings.

I have had this experience,Â and I believe it is safe to say that most of youÂ also have had one at one time or another.

In Genesis chapter 18, we read that Abraham was visited by three men.Â As it turns out, two of the men were angelsÂ and the third was Jesus Himself.Â It was one of the rare instances where Jesus visited the earthÂ in human form prior to His birth in Bethlehem.

Abrahamâ€™s reaction to the visitors was to leap to his feet and greet them.Â He opened his heart and homeÂ to them and insured that they received nourishment.Â Hospitality was shown before he became aware of who they were.Â In giving them water and food he entertained angels (and the Lord) unawares.Â That is what todayâ€™s Scripture from Hebrews 13 says we may experience.

The bottom line is that we are called to be the friendliestÂ and most gracious people on the face of the earth.Â People should see Jesus in the way we reach outÂ and make people feel welcome.

There are scores of lonely people who are starving forÂ hospitality.Â Are you and I willing to open our hearts to them?Â Remember â€• it may be an angel calling!