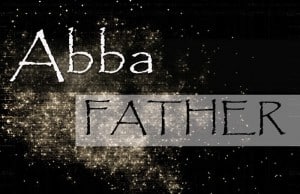 So you have not received a spirit that makes you fearful slaves. Instead, you received God’s Spirit when he adopted you as his own children. Now we call him, “Abba, Father.” – (Romans 8:15)

Abba! The first syllables most babies utter. The name for Father in the language Jesus grew up speaking. Abba is a term of endearment, dependency, intimacy, tenderness, and respect.

Because of the Holy Spirit’s presence within us, we call out to God and address him in this precious, intimate, and dependent way: Abba Father. The Creator of the universe, the God who dwells in eternity, the God who became flesh in Jesus, and the God who had the power to conquer death, sin, and the evil one, invites us to call him our Abba Father!

Such overwhelming grace … such indescribable mercy … such intimate relationship with God is ours because of the Holy Spirit’s presence within us.

Prayer : O Abba Father, thank you for being my loving heavenly Father and welcoming me to you as your precious child! In Jesus’ name. Amen.

This entry is filed under Think N Grow. You can follow any responses to this entry through the RSS 2.0 feed. You can leave a response, or trackback from your own site.
One Response to “Abba Father”
1