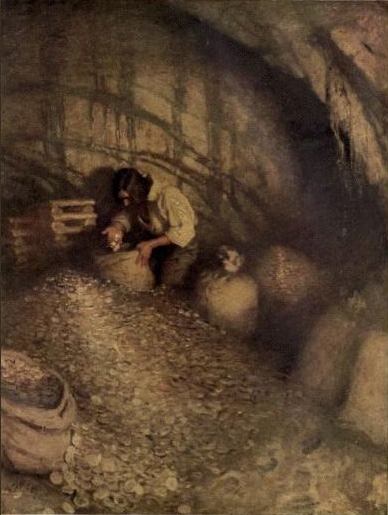 Once upon a time there was a White Knight looking for adventure. He came to a village where legends told of a terrible ogre in a pit. Bravely the White Knight took up the challenge. He would do battle with the terrible ogre in the pit. The people remembered several courageous men who had climbed down into the pit, but no one could ever remember one of those champions returning.

The White Knight stood looking at the deep dark hole. The opening was so narrow that he stripped himself of armor and all unnecessary clothing. He took only a long dagger, which he tied around his neck with a leather strap. After securing a rope at the opening and testing it’s strength, he gripped it firmly and began lowering himself, hand under hand, letting the rope slip between his feet. Soon he felt the smooth cool floor of the chamber. It took several minutes for his eyes to adjust to the darkness, but soon he focused on a large mound. Then he realized it was the bones of his predecessors, along with their assorted weapons. A little way off, he spotted another mound, but he wasn’t sure what it was.

Suddenly he was surprised by the inhabitant of the pit…. surprised because he didn’t anticipate the ogre would be only as tall as a rabbit. The ogre raised it’s arms and screeched with it’s squeaky voice, trying to appear a fierce as possible. The White Knight picked up a sword from the floor and prepared to do battle, but quick as a rat, the ogre ran into a hole near the second mound.

The White Knight followed and the second mound became clearer and again he was surprised. Before his eyes glittered balls of gold as big as grapefruit and diamonds as big as plums. With only a small part of that treasure even a commoner would be a prince for life. The ogre lost it’s importance in view of this great treasure.

But the Knight had a problem. How would he carry it out of the hole? He had no pockets. Who would believe him if he didn’t bring back at least a piece?

He suddenly had an idea. He would take one of the diamonds in his mouth and carry it that way until he climbed out of the hole. He could always come back later for the rest. Hurriedly he chose one of the larger diamonds. It fit comfortably into his mouth and he began the arduous climb out of the pit, hand over hand, gripping the rope with his feet. Higher and higher he climbed until the heavy exertion began to render him breathless. He would have to breathe through his mouth in order to get enough air. As he took a large gulp of air, the diamond slipped and stuck in his throat. The White Knight choked on his treasure, lost consciousness, and fell to his death on the mound of bones below.

Then Jesus said to them, “Watch out! Be on your guard against all kinds of greed; a manâ€™s life does not consist in the abundance of his possessions.” – Luke 12:15.