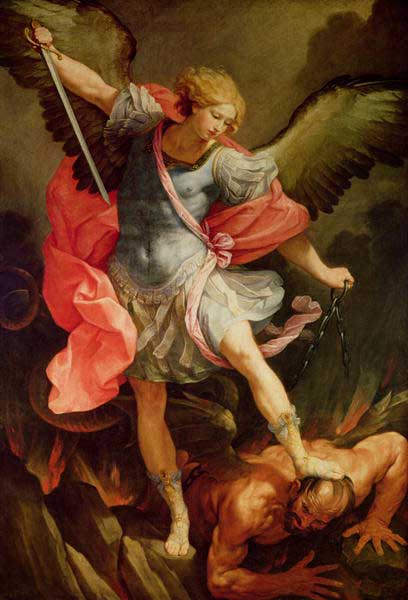 The name Michael signifies “Who is like to God?” and was the war-cry of the good angels in the battle fought in heaven against satan and his followers. Holy Scripture describes St. Michael as “one of the chief princes,” and leader of the forces of heaven in their triumph over the powers of hell. He has been especially honored and invoked as patron and protector by the Church from the time of the Apostles.

Although he is always called “the Archangel” the Greek Fathers and many others place him over all the angels – as Prince of the Seraphim.

St. Michael is the patron of grocers, mariners, paratroopers, police and sickness.

Four times his name is recorded in Scripture:

(1) Daniel 10:13 sqq., Gabriel says to Daniel, when he asks God to permit the Jews to return to Jerusalem: “The Angel [D.V. prince] of the kingdom of the Persians resisted me . . . and, behold Michael, one of the chief princes, came to help me . . . and none is my helper in all these things, but Michael your prince.”

(2) Daniel 12, the Angel speaking of the end of the world and the Antichrist says: “At that time shall Michael rise up, the great prince, who standeth for the children of thy people.”

(3) In the Catholic Epistle of St. Jude: “When Michael the Archangel, disputing with the devil, contended about the body of Moses”, etc. St. Jude alludes to an ancient Jewish tradition of a dispute between Michael and Satan over the body of Moses, an account of which is also found in the apocryphal book on the assumption of Moses (Origen, De Principiis III.2.2). St. Michael concealed the tomb of Moses; Satan, however, by disclosing it, tried to seduce the Jewish people to the sin of hero-worship. St. Michael also guards the body of Eve, according to the “Revelation of Moses” (“Apocryphal Gospels”, etc., ed. A. Walker, Edinburgh, p. 647).

(4) Apocalypse 12:7, “And there was a great battle in heaven, Michael and his angels fought with the dragon.” St. John speaks of the great conflict at the end of time, which reflects also the battle in heaven at the beginning of time. According to the Fathers there is often question of St. Michael in Scripture where his name is not mentioned. They say he was the cherub who stood at the gate of paradise, “to keep the way of the tree of life” (Genesis 3:24), the angel through whom God published the Decalogue to his chosen people, the angel who stood in the way against Balaam (Numbers 22:22 sqq.), the angel who routed the army of Sennacherib (2 Kings 19:35).

1. To fight against Satan.
2. To rescue the souls of the faithful from the power of the enemy, especially at the hour of death.
3. To be the champion of God’s people
4. To call away from earth and bring men’s souls to judgment

Regarding his rank in the celestial hierarchy opinions vary; St. Basil (Hom. de angelis) and other Greek Fathers, also Salmeron, Bellarmine, etc., place St. Michael over all the angels; they say he is called “archangel” because he is the prince of the other angels; some others believe that he is the prince of the seraphim, the first of the nine angelic orders. The hymn of the Mozarabic Breviary places St. Michael even above the Twenty-four Elders. The Greek Liturgy styles him Archistrategos, “highest general”.

Prayer to St.Michael, the Archangel 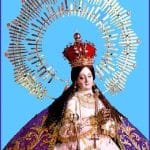 Prayer to Our Lady of Healing 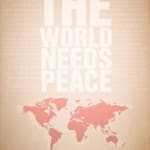 Poem : Look Around You 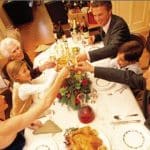