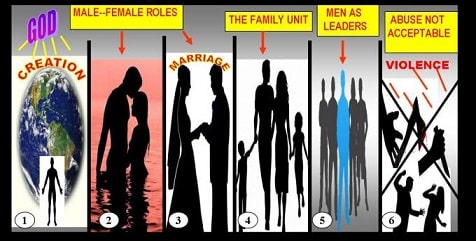 24 Therefore God gave them up in the lusts of their hearts to impurity, to the dishonoring of their bodies among themselves, 25 because they exchanged the truth about God for a lie and worshiped and served the creature rather than the Creator, who is blessed forever! Amen.

26 For this reason God gave them up to dishonorable passions. For their women exchanged natural relations for those that are contrary to nature; 27 and the men likewise gave up natural relations with women and were consumed with passion for one another, men committing shameless acts with men and receiving in themselves the due penalty for their error.

28 And since they did not see fit to acknowledge God, God gave them up to a debased mind to do what ought not to be done. 29 They were filled with all manner of unrighteousness, evil, covetousness, malice. They are full of envy, murder, strife, deceit, maliciousness. They are gossips, 30 slanderers, haters of God, insolent, haughty, boastful, inventors of evil, disobedient to parents, 31 foolish, faithless, heartless, ruthless. 32 Though they know Godâ€™s righteous decree that those who practice such things deserve to die, they not only do them but give approval to those who practice them. [Romans 1:24-32]

I would put all the 10 as one commandment i.e. “DO NOT TAMPER THE IMAGE OF GOD THAT IS IN YOU”

The word of God is 100% absolute truth and 100% pure and full of life, valid anywhere anytime. The Holy Bible is a book beyond space and time. So just follow The Word. Genesis 1:27 says “So God created man in his own image, in the image of God He created him; male and female He created them”. It is not written male OR female but male AND female.

“He is before all things, and in him all things hold together”[Colossians 1:17]. Every tissue in our body is bound and has the shape of cross. Our God is a Father and Mother to us. He has both the nature and He is beyond gender.

Suppose for example, we take the image of God to be a cross with 2 lines.
1. Vertical (male)
2. Horizontal (female)

When God created Adam, He blew His breath into his nostrils. But when Eve was made, He removed a part of Adam and brought her to life. That is why when they come together, they reproduce the full image of God through matrimony, a replica or model of Christ and Church (unlike animal union). In marriage their souls become one and this soul is the throne, the temple of God, united by God and no man shall undo this.

Our life should be so that the image of the cross (God’s image) becomes zoomed in, starting from:
1. A single cell
2. Our body – a temple of God
3. Marriage
4. Family – with husband as head, wife the body and children as the blood
5. Church – with Christ as head and members as the body
6. The whole world – the world as one body with one God, Lord Jesus Christ

Single people, religious people, widows and widowers can complete this image by fixing their thoughts on God. If God is absent, they will tend to lead astray.

In our relationship to fellow beings we must always be conscious of the sacred image not being tampered. Except the sacred marriage, all other relationships add more lines in the image of the cross and the Cross will not be a cross any more. Homosexuality (lesbians and gays) and self-abuse of the body are not from God. Some people argue that they are homosexuals by birth. No, God never created them so.

In Romans 1:24-32, we see the words “GOD GAVE THEM UP” three times. Not only those who practice but also those who approve or stay silent and support such deeds. The punishment is “deserve to die” (Romans 1:32). All sins related to adultery like prostitution, pre and post-marital relationship cravings physically or mentally or emotionally produce severe distorted or mosaic image, tampering the original image of the cross.

Romans 1:25 says “they served the creature rather than the Creator.”Â The word IMAGE means copy, replica, a symbolic of the original. So we always have an original. But the word IDOL means ‘false’ in thesaurus. Thus any craving towards any person, properties, things, hero-worship of self or others, addictions, other practices that take you far away from God is idolatry. When you run after false things, removing His beautiful image in you, LIFE ceases and you begin only to EXIST and die in flesh, becoming mortal like animals, for the soul is already dead. It is as dangerous as that.

Ten commandments strongly protect us from “TAMPERING THE IMAGE OF GOD THAT IS IN US”. Take care to see nothing removes the image of God in you! Amen.

3 thoughts on “Adultery and Idolatry”