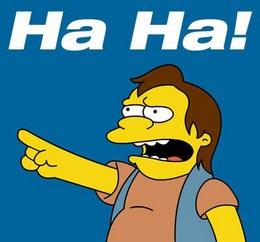 Bill Andrews was a big, awkward, homely guy. He dressed oddly with ill fitting cloths. There were several fellows who thought it smart to make fun of him. One day one fellow noticed a small tear in his shirt and gave it a small rip. Another worker in the factory added his bit, and before long there was quite a ribbon dangling. Bill went on about his work and as he passed too near a moving belt the shirt strip was sucked into the machinery. In a split second the sleeve and Bill were in trouble. Alarms were sounded, switches pulled, and trouble was avoided. The foreman, however, aware of what had happened, summoned the men and related this story:

“In my younger days I worked in a small factory. That’s where I first met Mike Havoc. He was big and witty, was always making jokes, playing little pranks. Mike was a leader. Then there was Pete Lumas. He always went along with Mike. He was a follower. And then I remember Jake. He was a little older than the rest of us — quiet, harmless, apart. He ate his lunch by himself. He wore the same patched trousers for three years straight. He never entered into the games we played at noon, wrestling, horse shoe and such. He was indifferent.

“Jake was a natural target for practical jokes. He might find a live frog in his dinner pail, or a dead rodent in his hat. But he always took it in good humor.

“Then one fall when things were slack, Mike took off a few days to go hunting. Pete went along, of course. And they promised all of us that if they got anything they’d bring us each a piece. So we were all quite excited when we heard that they’d returned and that Mike had got a really nice big buck. We heard more than that. Pete could never keep anything to himself, and it leaked out that they had a real whopper to play on Jake. Mike had cut up the critter and had made a nice package for each of us. And, for the laugh, for the joke of it, he had saved the ears, the tail, the hoofs — it would be so funny when Jake unwrapped them.

“Mike distributed his packages during the noon hour. We each got a nice piece, opened it, and thanked him. The biggest package of all he saved until last. It was for Jake. Pete was all but bursting; and Mike looked very smug. Like always, Jake sat by himself; he was on the far side of the big table. Mike pushed the package over to where he could reach it; and we all sat and waited. Jake was never one to say much. You might never know that he was around for all the talking he did. In three years he’d never said a hundred words. So we were all quite hypnotized with what happened next.

“He took the package firmly in his grip and rose slowly to his feet. He smiled broadly at Mike — and it was then we noticed that his eyes were glistening. His adam’s apple bobbed up and down for a moment and then he got control of himself.

“I knew you wouldn’t forget me,” he said gratefully; “I knew you’d come through! You’re big and you’re playful, but I knew all along that you had a good heart.” He swallowed again, and then took in the rest of us.

“I know I haven’t seemed too chummy with you men; but I never meant to be rude. You see, I’ve got nine kids at home — and a wife that’s been an invalid — bedfast now for four years. She ain’t ever going to get any better. And sometimes when she’s real bad off, I have to sit up all night to take care of her. And most of my wages have had to go for doctors and medicine. The kids do all they can to help out, but at times it’s been hard to keep food in their mouths. Maybe you think it’s funny that I go off by myself to eat my dinner. Well, I guess I’ve been a little ashamed, because I don’t always have anything between my sandwich. Or like today — maybe there’s only a raw turnip in my pail. But I want you to know that this meat really means a lot to me. Maybe more than to anybody here because tonight my kids,” he wiped the moisture from his eyes with the back of his hand, “…tonight my kids will have a really…” He tugged at the string.

“We’d been watching Jake so intently we hadn’t paid much notice to Mike and Pete. But we all noticed them now, because they both dove at once to try to grab the package. But they were too late. Jake had broken the wrapper and was already surveying his present. He examined each hoof, each ear, and then he held up the tail. It wiggled limply. It should have been so funny, but nobody laughed — nobody at all. But the hardest part was when Jake looked up and tried to smile.”

This was where the foreman left the story and the men. He didn’t need to say anymore; but it was gratifying to notice that as each man ate his lunch that day, he shared part with Bill Andrews and one fellow even offered him his shirt.