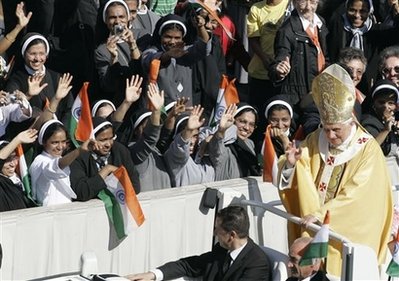 Pope Benedict XVI, right, reacts as he leaves, after an open-air canonization ceremony in St. Peter square at the Vatican Sunday, Oct. 12, 2008. Benedict gave the Roman Catholic church four new saints, including, Sister Alphonsa of the Immaculate Conception, an Indian woman whose canonization is seen as a morale boost to Christians in India who have suffered Hindu violence. The other new saints are: Gaetano Errico, a Neapolitan priest who founded a missionary order in the 19th century; Sister Maria Bernarda, who was named Verena Buetler when she was born in Switzerland in 1848 and who worked as a nun in Ecuador and Colombia, and Narcisa de Jesus Martillo Moran, a 19th century laywoman from Ecuador who helped the sick and the poor.