Twila Paris – ‘He is Exalted’ album 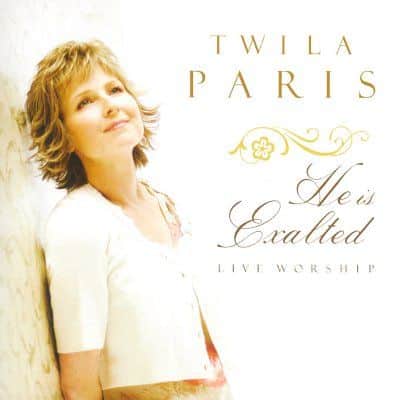 From a theological perspective, anything mankind intentionally does for God is a tiny gift compared to what God has already done for His beloved creations. But looking back over Twila Paris’ illustrious musical career, this singer/songwriter’s accomplishments are anything but small. She has released 22 albums, amassed 33 number one singles, and was named the Gospel Music Association Female Vocalist of the Year an astounding three separate times. And she’s much more than just a pop songwriter because familiar Paris songs, like “He Is Exalted” and “We Bow Down”, can also be found in many church hymnals.

Paris released her first full-length, Knowin’ You’re Around in 1981, and along the way she has written books, recorded children’s music, and created timeless worship songs. Her song “God Is In Control” won a GMA Song of the Year award in 1995 and her 1992 Sanctuary release won the GMA Praise & Worship Album of the Year, just to name a few of her accolades. Even with all these accomplishments under her belt Small Sacrifice still stands out distinctly from Paris’ past work. This new CD is being released exclusively through LifeWay Christian Stores. And it will also be available for purchase on Paris’ website (www.twilaparis.com) and through iTunes.

Paris has helped to pioneer today’s praise and worship music and contributed greatly to making this informal style acceptable to normally more conservative churches. Folks who purchase Small Sacrifice will discover new worship songs like “Live to Praise” and “Alleluia.” But this fresh release also showcases Paris the well-rounded songwriter, as it displays compositions with wide ranging spiritual application.

“I called the album Small Sacrifice because I love the scriptural concept that giving of ourselves as a living sacrifice is simply our reasonable service,” Paris says of the new CD. “In other words, if I give my whole life and my whole self and all that I am to God, well, that’s a small sacrifice. That’s nothing, really, compared to what He’s done for me.”

All believers are called to serve God, though we sometimes fail to recognize His voice. This seeming communication breakdown is addressed specifically in another song on the disc, “Not Forgotten.”

Paris says, “Most of us have been through seasons when we wonder if God is really mindful of particular desires in our hearts that have not been fulfilled. For some, it’s a ministry they feel called to but don’t yet see realized. Others may have struggled with waiting for marriage or children. The key line in the song is: ‘He has not forgotten you.'”
—– TWILA PARIS BIO PAGE 2

“There Is A Plan“ is also a special new song. Paris recalls, “I heard some ‘behind the scenes’ stories about how God was using Christian young people before the fall of the Berlin Wall. It wasn’t just a political thing that was going on, although you heard about Ronald Reagan and Margaret Thatcher’s involvement. God was using people who were visible and powerful, as well as unnoticed people who were rising up from the grassroots. And then, apparently ‘all of a sudden’ the Berlin Wall came down ‘overnight.’ This is just one example that I happened to write about as a little snippet from history. What occurred to me when I heard those stories was that so often, when God is doing His work, it is initially invisible to the human eye. But He’s got this thing that is just beneath the surface. We look around and see what’s going on in our society and in our world and we can feel small, voiceless, and maybe a little bit hopeless. But God is always working and we never know when this next thing is going to burst onto the timeline of history. The greatest illustration ever is the birth of Christ.”

Ultimately, Paris wants to remind her listeners that small sacrifices sometimes add up to huge spiritual results. “I want to encourage people to be faithful in what God has given them to do, however insignificant it might seem, because they have no idea how huge it could be in God’s overall plan.”

He Is Exalted: Live Worship

Eight new worship songs plus new versions of God is In Control and He is Exalted. Also includes Days of Elijah and We All Bow Down.

He Is Exalted music tracks

Come, Let’s worship Our Lord together with Twila Paris and her team.

This entry is filed under News. You can follow any responses to this entry through the RSS 2.0 feed. You can leave a response, or trackback from your own site.
3 Responses to “Twila Paris – ‘He is Exalted’ album”
1

Hi there Expert, I fell lucky that I located this post while browsing for lyrics to christian contemporary music. I am with you on the topic of ck To God – Christian Thoughts. Ironically, I was just putting a lot of thought into this last Thursday.

I esteemed yours blog,
thanks the author a lot of useful to myself have found..

I m looking fir song “Band of Survivors” by Twila Paris..I have searched for it in many websites but I cudnt get it…plz if anyone of u has the mp3 version of that song mail it to Anantha.V0406@gmail.com…Plz..Itz a humble request..