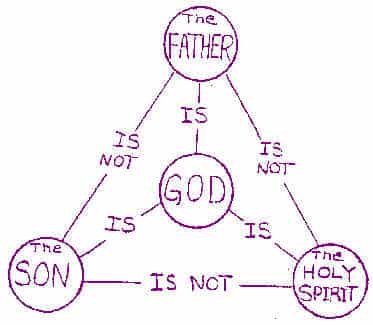 4) The Holy Spirit is a Person who is God.

5) The Father, the Son, and the Holy Spirit are distinct from each other.

1) within the one Being or essence of God, there eternally exists three distinct yet equal Persons, God the Father, God the Son, and God the Holy Spirit.

2) in the full Deity and full humanity of Jesus Christ. These two distinct natures, perfect deity and perfect humanity, are inseparably united in the one Person.

3) in the full Deity and full personality of the Holy Spirit and in His work in regeneration and sanctification.

If we expected today’s readings to give us a clear and elaborate presentation of the doctrine of the Blessed Trinity, we have found out that they simply do not. The doctrine of three persons in one God, equal in divinity yet distinct in personality, is not explicitly spelt out in the Bible. In fact the very word “Trinity” is not found in the Bible.

Rather early Christians arrived at the doctrine of the Trinity when they applied their God-given reason to the revelation which they had received in faith. Jesus spoke about the Father who sent him (the Son) and about the Holy Spirit whom he was going to send. He said that the Father had given him (the Son) all that he has and that he in turn has given to the Holy Spirit all that he has received from the Father. In this we see the unity of purpose among the three persons of the Trinity.

In the story of salvation we usually attribute creation to the Father, redemption to the Son and sanctification to the Holy Spirit. Nevertheless, though they are distinct as persons, neither the Father nor the Son nor the Holy Spirit ever exists in separation or acts in isolation from the other two persons of the Godhead.

The inner relationship of the Father, Son and Holy Spirit in such a way that each of them is fully and equally God, yet there are not three Gods but one is incomprehensible to the human mind. It is a mystery.

The story is told of St Augustine of Hippo, a great philosopher and theologian who wanted so much to understand the doctrine of the Trinity and to be able to explain it logically. One day as he was walking along the sea shore and reflecting on this, he suddenly saw a little child all alone on the shore. The child made a whole in the sand, ran to the sea with a little cup, filled her cup, came and poured it into the hole she had made in the sand. Back and forth she went to the sea, filled her cup and came and poured it into the hole. Augustine went up to her and said, “Little child, what are doing?” and she replied, “I am trying to empty the sea into this hole.” “How do you think,” Augustine asked her, “that you can empty this immense sea into this tiny hole and with this tiny cup?” To which she replied, ” And you, how do you suppose that with this your small head you can comprehend the immensity of God?” With that the child disappeared.

Like Augustine we may not be able to understand the how of the Trinity but I think it is very important to understand the why. Why did God reveal to us this mystery regarding the very nature of the Supreme Being?

So the more important question for us to ask today is: What does the doctrine of the Blessed Trinity tell us about the kind of God we worship and what does this say about the kind of people we should be? And here I have two points to share with you.

1. God does not exist in isolated individualism but in a community of relationships. In other words, God is not a loner or a recluse. This means that a Christian in search of Godliness (Matthew 5:48) must shun every tendency to isolationism and individualism. The ideal Christian spirituality is not that of flight from the world like that of certain Buddhist monastic traditions where the quest for holiness means withdrawal to the Himalayas away from contact with other people and society.

2. True love requires three partners. You remember the old saying “Two is company, three is a crowd.” The Trinity shows us that three is community, three is love at its best; three is not a crowd. Taking an example from the human condition we see that when a man A is in love he looks for a woman B so that together they can produce a baby C. Father, mother and child – love when it becomes complete becomes a trinity. Over and above that, each one of us becomes fully human only when we are in relationship with God and in relationship with others. In that way our life becomes Trinitarian like that of God. The doctrine of the Blessed Trinity challenges us to adopt an I-and-God-and-neighbour principle.

May the grace of the Holy Trinity help us to banish all traces of selfishness in our lives and to live in love of God and of neighbour.

38 thoughts on “The Trinity Explained”