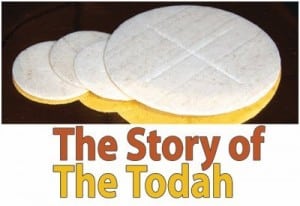 The Passover was once in a year, but the Eucharist is daily offered, why? This article answers the question.

At the Last Supper in the Upper Room in 33 A.D. Jesus Christ used the word Todah instead of the word Eucharist in Greek which means thanksgiving. The New Testament was written in Greek.

Scholars have often wondered how the practice of Christian Eucharist could have arisen from the Lordâ€™s Supper, which occurred in the context of the Jewish Passover. Since Passover occurs only once a year, how is it that the Christians got the notion that they could celebrate Jesusâ€™ sacrificial meal daily?

The answer is found in the ancient Israelite sacrifice called the todah.

While most people have heard of Old Testament sacrifices such as the holocaust offering or burnt offering, those who have heard of the todah sacrifice are as rare as lotto winners. Todayâ€™s ignorance concerning the todah, however, should not imply that it was unimportant to the Jews. Far from it. The todah was one of the most significant sacrifices of the Jews.

Indeed, an old rabbinic teaching says: â€œIn the coming Messianic age all sacrifices will cease, but the thanksgiving offering [todah] will never cease.â€ What is it about this sacrifice that makes it stand alone in such a way that it would outlast all other sacrifices after the redemption of the Messiah?

A todah sacrifice would be offered by someone whose life had been delivered from great peril, such as disease or the sword. The redeemed person would show his gratitude to God by gathering his closest friends and family for a todah sacrificial meal. The lamb would be sacrificed in the Temple and the bread for the meal would be consecrated the moment the lamb was sacrificed.

What does the word â€œtodahâ€ mean? It is Hebrew for â€œthanksgiving,â€ although it also is a confession of praise in addition to gratitude. For example, Leah gave thanks to God when she bore her fourth son, and so she named him yehudah â€“ or Judah â€“ which is the verbal form of todah â€“ to give thanks.

There are many examples in the Old Testaments of people offering todah â€“ thanks â€“ to God. Jonah, while in the belly of the whale, vows to offer up a todah sacrifice in the Temple if he is delivered (cf. Jon. 2:3-10). King Hezekiah offers up a todah hymn upon recovering from a life threatening illness (cf. Is.38).

Temple Liturgy: After David had defeated the last Canaanite stronghold, he decided to bring the Ark of the Covenant up to Jerusalem. The bringing of the ark to Jerusalem was the occasion of a great national todah festival. The sacrifices were â€œpeace offerings,â€ and the todah was the most important and common peace offering. All the elements of the todah were present.

For example, David offered bread and wine along with the meat of the sacrifices (I Chron. 16:3). Most importantly, David had the Levites lead the people in todah hymns, that is, psalms of thanksgiving (1 Chron. 16:8-36).

At this pivotal point in Israelâ€™s story, David not only changes the location of the ark, but he also transforms Israelâ€™s liturgy. At the todah celebration that brought the ark into Jerusalem, David gave the Levites a new mandate â€“ their primary job was to â€œinvoke, to thank, and to praise the LORDâ€ (1 Chron. 16:4). The Hebrew word for â€œinvokeâ€ is zakar, which literally means to remember.

One of the most important purposes of a todah meal was to remember the saving deeds of the Lord. Indeed this is one of the functions of the todah psalms: to recount the mighty deeds of God (cf. Ps. 22:28).

We are also informed that â€˜on that day David first appointed that thanksgiving [todah] be sung to the LORD by Asaph and his brethrenâ€™ (1 Chron. 16:7). The Levites were to give thanks and praise to God â€œcontinuallyâ€ (1 Chron. 16:37, 40). This perpetual adoration was to characterize the Temple liturgy as a todah liturgy â€“ a liturgy of thanksgiving.

The Psalter made up the heart of the hymns and prayers of the Temple liturgy. In light of Davidâ€™s appointing the Levites to give perpetual thanks, we can see why â€œthe thanksgiving offering constituted the cultic basis for the main bulk of the Psalms. The todah psalms have a twofold structure. First, although they may begin with thanks and praise, the first half of the song is largely a lament, where the psalmist recounts how his life was in peril. Then the psalmist recounts how God graciously heard his plea and brought about deliverance from death.

Thus the second part of the song, or at least its conclusion, is usually taken up with giving thanks and praise to God. So the movement of the todah psalms is from plight to praise â€“ a movement that reflects Israelâ€™s movement from enslavement to exodus â€“ while also looking forward to the paschal mystery of Our Lord.

Todah and Jesus: the importance of the todah as a backdrop for Jesus and the Last Supper comes into sharp focus when we realize that in Jesus day the Greek word that would best translate the Hebrew todah was eucharistia, which also means â€œthanksgiving.â€ From the earliest Christian courses we learn that the celebration of the Lordâ€™s meal, or what we call the Mass, was known by Christians as the Eucharist. After all, at the Last Supper Jesus took the bread and wine and gave â€œthanksâ€ (eucharistia) over them (Luke 22:19).

The todah stands behind what Jesus did at the Last Supper. Jesusâ€™ giving thanks over the bread and wine came in the context of a todah sacrifice rather than a Passover meal. Todah backdrop of Jesus meal, because the evidence for the Passover in the Gospel narratives is overwhelming.

The Last Supper celebrated in the upper room is both a Passover and a todah meal. The Passover has all the same elements found in the todah: bread, wine and sacrifice of a lamb, along with hymns and prayers. Indeed, the Hallel psalms (113:118) that were sung during the Passover meal were all todah psalms!

The Exodus narrative itself has the basic contours of a todah hymn, with Israel in distress and lament calling out to the Lord (cf. Ex. 2:23-25), while the Lord in turn hears their cry and delivers them (cf. Ex. 6:5-7). The Passover has both the form and content of the todah, because it is a concrete example of a todah sacrifice.

Philo, a first century Jew, describes the Passover as a festival of thanksgiving. â€œAnd this festival is instituted in remembrance of and as giving thanks (eucharistia) for, their great migration which they made from Egypt. Philo focuses here on two key reasons for the Passover: remembrance and thanksgiving (cf. Ex. 12:14, 13:3). Here again we must note how the Passover fits into the todah genre, for remembrance was one of the primary purposes of the todah. The Passover is Israelâ€™s corporate todah meal.

When Jesus takes the bread, breaks it and declares thanksgiving (eucharistia), He is performing the key function of both the today and Passover â€“ giving thanks for deliverance. But here Jesus is not simply looking back at Israelâ€™s history of salvation, but forward to His death and Resurrection. In other words, Jesus is giving thanks to the Father for His love and for the new life to be granted in the Resurrection. Note that Jesus words over the bread, His thanksgiving, is what the Christian tradition has focused upon â€“ so that they could call every re-enactment of the Last Supper â€œEucharistâ€.

In the Eucharist, Christians give thanks for Godâ€™s deliverance and remember how Jesus brought about the new exodus with His death and Resurrection. For Jesus had told them, â€œDo this in remembrance of meâ€ (Luke 22:19. This act of remembrance is what the todah is all about â€“ recalling in gratitude Godâ€™s saving deeds. This leads us to one of the key fruits of a todah â€“ or Eucharistic â€“ spirituality: A deep sense of thankfulness leads to worship. Worship flows from gratitude; cut off from gratitude the will to worship withers.

The todah teaches us to trust God with a grateful heart. By â€œrememberingâ€ Jesusâ€™ gift of Himself upon the Cross our love for God is rekindled. Such â€œremembranceâ€, which is the purpose of todah, leads to deeper trust.

As the psalmist says, â€œSome trust in chariots, and some in horses; but we will remember the name of the LORD Jesus Christ Son of the Living God is our Gospelâ€ (Ps. 20:7).

3 thoughts on “The Story of The Todah”