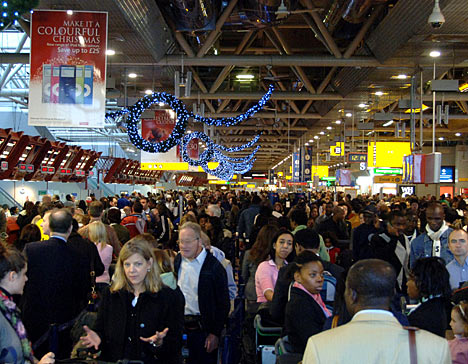 Just before Christmas I was shopping at a toy fayre in Nottingham.

I glanced to my left and caught sight of a queue at the doll counter; they were waiting for the shelves to be restocked with Mattel dolls. As I looked I realised that in the queue was a good friend of mine. Knowing Ernie well I was sure that he had no daughters nor did he have any nieces so I wondered why he should want to buy a doll at Christmas time’

‘Hey, Ernie,’ I cried, ‘I hadn’t realised you collected dolls.’
‘I don’t,’ he replied laughing’

‘Really,’ I queried, ‘then you must be buying a Christmas present then?’
‘No, not at all, my friend,’ responded Ernie, his eyes twinkling merrily’

‘If you don’t mind my asking then Ernie,’ I said, ‘Why exactly are you standing in this particular queue?’

Posted in Wits N Jokes | No Comments yet, your thoughts are welcome
December 13th, 2008

On Christmas Eve, Nathan thought it would be nice to buy his wife a little gift for the next day. Always short of money, he thought long and hard about what that present might be’

Unable to decide, Nathan entered Debenhams and in the cosmetics section he asked the girl, ‘How about some perfume?’ She showed him a bottle costing £75. [$150USD]

The young lady returned with a smaller bottle for £50. ‘Oh dear,’ Nathan groused, ‘still far too much.’

Growing rather annoyed at Nathan’s meanness, the sales girl brought out a tiny £10 bottle and offered it to him.

Nathan became really agitated, ‘What I mean’, he whined, ‘is I’d like to see something really cheap.’

So the sales girl handed him a mirror!!!

Joke : How they forecast a cold winter

One day in early September the chief of a Native American tribe was asked by his tribal elders if the winter of 2008/9 was going to be cold or mild. The chief asked his medicine man, but he too had lost touch with the reading signs from the natural world around the Great Lakes.

In truth, neither of them had idea about how to predict the coming winter. However, the chief decided to take a modern approach, and the chief rang the National Weather Service in Gaylord Michigan.

‘Yes, it is going to be a cold winter,’ the meteorological officer told the chief. Consequently, he went back to his tribe and told the men to collect plenty of firewood.

A fortnight later the chief called the Weather Service and asked for an update. ‘Are you still forecasting a cold winter?’ he asked.

As a result of this brief conversation the chief went back to the tribe and told his people to collect every bit of wood they could find.

A month later the chief called the National Weather Service once more and asked about the coming winter. ‘Yes,’ he was told, ‘it is going to be one of the coldest winters ever.’

‘How can you be so sure?’ the chief asked.

The weatherman replied: ‘Because the Native Americans of the Great Lakes are collecting wood like crazy.’