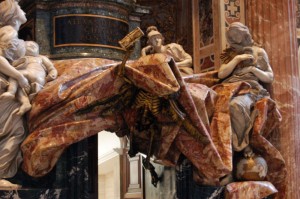 Detail of the monument to Pope Alexander (Chigi) VII (d. 1667) by Bernini, created in 1671-78. The working door below symbolizes the Gate of Death, above which a skeleton lifts a fold of red marble drapery and holds an hourglass. He is flanked on the right by a statue representing Truth or religion, who rests her foot on a globe Ã¢â‚¬â€ specifically placed upon the British Isles, symbolizing the pope’s problems with the Church of England. Three other figures represent Charity, Prudence and Justice.